The robot is assumed to have a square shape and covers an area of 5 x 5 patches, which thus equals an area of 250 x 250 mm. These dimensions are very similar to the current commercially available window cleaning systems such as the Hobot, Windoro, and Winbot. Because this project considers the motion planning algorithms and not the particular geometry of the robot, the geometry of the robot needed to be set as fixed. Which means that the variables relating to this geometry are removed from the problem. The bottom side of the robot is divided into 5 x 5 squares, see the figure below. 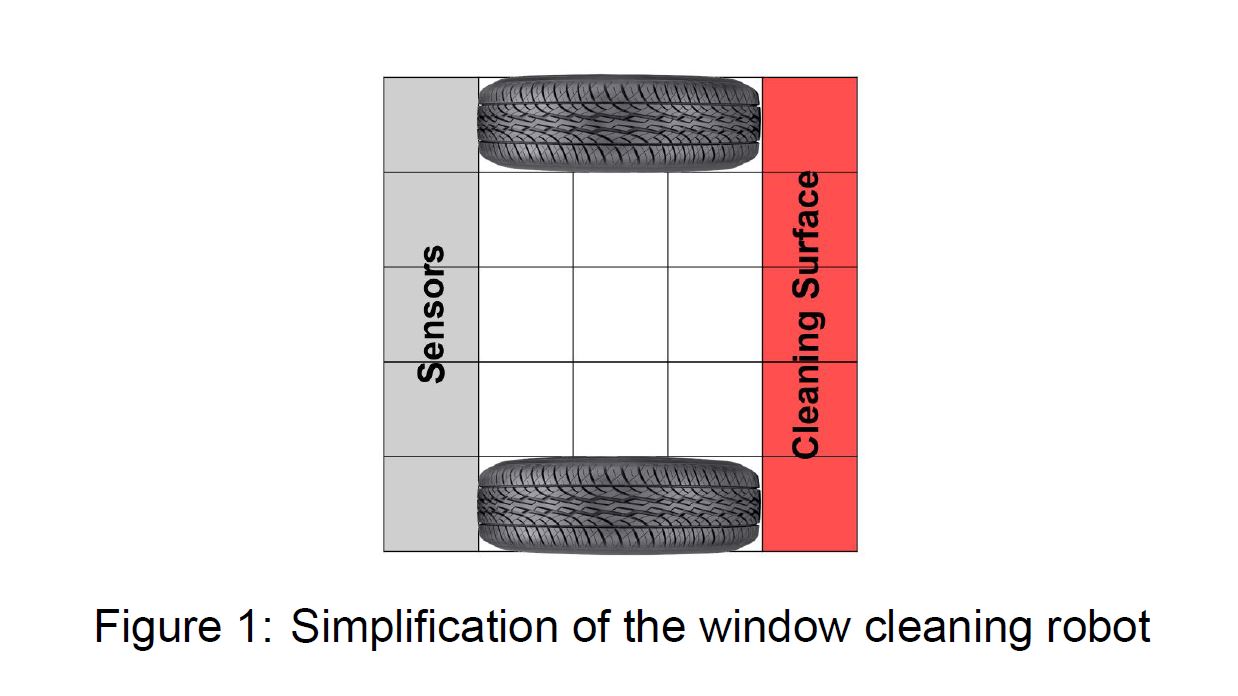 The outermost left and right columns of the 5 x 5 grid consist of optical sensors to detect dirt and cleaning surface, also called a cleaning pad, respectively. A couple of important remarks regarding the latter should be made. First, there is assumed that the robot cleans the window without moving parts (e.g. rotating disks). Only the movement of the robot makes sure that the window surface is cleaned. Second, the cleaning pad is adjustable in height. This enables the robot to lift its cleaning pad while turning which will prevent the robot from drawing extra stripes on the window surface. Also, when the robot is moving over a surface that is already clean, the cleaning pad is lifted in order to achieve less power consuming movement. This has to do with the fact that the normal force of the cleaning pad on the window does not counteract the vacuum anymore. Besides optical sensors and cleaning surface, two crawler tracks are added in between these two outer columns which enable the window cleaning robot to move and turn over the window. The remaining white square in the middle of the simplified robot is the suction area, which makes sure that the robot will stick to the window.

The simplified window cleaning robot has, besides the dirt sensors, also a few other sensors, namely gravity and force sensors. Both sensors are not explicitly modeled but do make up an important part of the model. For example, the existence of gravity sensors enables the robot to know what the upper and lower side of the window is. Force sensors, on the other hand, are mounted on each side of the robot. These sensors enable the robot to detect whether it hits one of the edges of the window.

At last, an important remark should be made about the abstraction of the rubber ring that is enclosing the robot, commonly referred to as the squeegee. In window cleaning robots, the squeegee has actually two functions. First, it is of course needed to wipe away the water that is supplied. Second, it is necessary for creating a vacuum to make sure that the robot sticks to the window. Because the squeegee is part of the outer edge of the window cleaning robot, and the outer edge is only a minor part of the robot, it is decided to abstract over the rubber ring that is functioning as squeegee.