The first step in modeling the motion planning algorithm with NetLogo consisted of creating the window with an adjustable dirt distribution that represents reality. The entire user interface including the window and robot is shown in Figure 3 below. As mentioned before, a single patch from the window represents an area of 50 x 50 mm. As can be seen in Figure 3, the dimensions of the window can be adjusted by means of sliders. The width-window slider can be incremented with 250 mm which corresponds to 5 patches, while the height-window slider has an incrementation of 250mmwhich corresponds to 5 patches. The reasons for these choices was already explained in Section 'Design Choices'. When the sliders are moved, and the button Setup Window is pressed, the model will adjust the amount of patches to the dimensions that are chosen. From a certain window size, the patch size is adjusted slightly to make sure that the whole window fits on the screen of the user of the model. 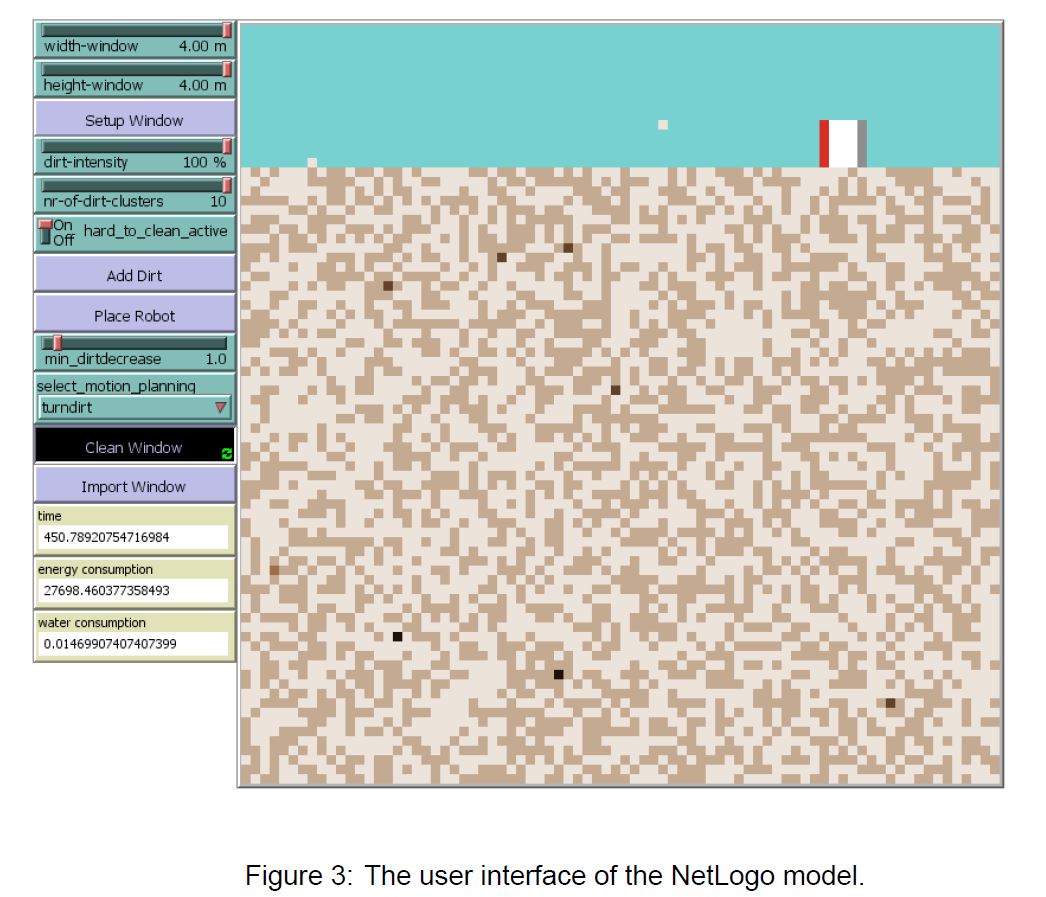 The above-mentioned dirt distribution is again modeled with the ideas as stated in Section 'The Window' At the start of each run of the model, each of the patches will receive a value of dirtiness between 0 and 100 denoted with the variable dirt-level. The dirtiness value of patches is indicated by the color of the patches. The darker the color of the patch, the higher the dirtiness value of the patch. When a patch is completely clean, its color changes to blue. The earlier mentioned more or less even distribution of dirt will result in a random dirtiness value for all patches that lies between 10 and 30. Subsequently, a number of patch clusters, which can be specified with the nr-of-dirt-cluster slider, is selected from which the previously received dirtiness value is overwritten with a random number between 40 and 100. Additionally, there is a dirt-intensity slider included in the model. The value of this slider in % is divided by 100 and all the dirtiness values of the patches are multiplied by this number. So, when a patch would receive a dirtiness value of for instance 30 and the slider is at 50 %, the dirtiness value that the patch eventually receives is equal to 15. As has been stated earlier, all patches are assigned a number that denotes how hard it is to clean each of them. This number is obtained for each patch by taking a sample from an exponential distribution with mean 1 and multiplying this value by 100. Next, if the number is bigger than 1, it is set to 1. The resulting number is eventually stored in the variable hard_to_clean for each patch. When the robot moves over patches, its dirt-reduction will be multiplied with this number. Most of these patches will have a value for this number that is equal to 1, which has no effect on the dirt-reduction. A small number of patches will get a smaller number and are thus harder to clean. They thus require a lot more wiping motions to fully clean them. The just explained hard to clean possibility for patches can be turned on or off by means of a switch in the user interface denoted by hard_to_clean_active. Switching this off, results in a state that all patches have a hard-to-clean value of 1, which means that this variable has no effect anymore on the dirt-reduction of each patch. The dirt distribution is generated with the button Add Dirt. Re-clicking the button results in a newly generated dirt distribution.

Apart from the already mentioned elements of the user interface, there are still a couple of buttons, monitors and one chooser that need to be explained. First, the Place Robot button places, as the name would suggest, the robot on the window. It however always places the robot in the middle of the window and not at a random position as has been stated earlier. This is done for a specific reason. When the robot starts cleaning the window, which is initiated with the Clean Window button, the robot first starts to move to the upper left corner for every programmed motion planning algorithm. The time that it takes to reach this top left corner is also added to the total cleaning time. To be able to compare the cleaning times of the considered motion planning algorithms with each other in an objective way, it is thus necessary that this time to reach the top left corner is always the same for all algorithms for a fixed window configuration. This is the reason for always placing the robot in the same position. Additionally, this is also the reason for not taking the time into account that the robot needs to turn at its initial place in the middle of the window to face the upper edge of the window. The robot is namely always placed with a random heading direction. To eliminate this source of randomness from the time that is necessary to move to the upper left corner, the initial rotation time is thus not considered.

Another choice in the model that was made in order to be able to make an objective comparison between the modeled algorithms was the choice for the implementation of the Import Window button. With this button, it is possible to import a previously used dirt distribution again. This option is necessary to test the considered motion planning algorithms on exactly the same conditions. It is a very welcome addition to the model, since there is a big factor of randomization included in the dirt distribution which can be eliminated in this way when that is deemed necessary. This button is also used to obtain the results presented in the Section 'Comparison'. To select a specific motion planning algorithm for testing, the chooser select_motion_planning is used. The option standard denotes the reference algorithm, zigzag denotes algorithm 1 and turndirt denotes algorithm 2 as described in 'algortithm 2'. The monitor time keeps track of the time that it takes the robot to clean the window. The monitors energy consumption and water consumption keep track of the energy consumption respectively the water consumption of the robot during the cleaning of the window.