From Control Systems Technology Group
Jump to navigation Jump to search
The printable version is no longer supported and may have rendering errors. Please update your browser bookmarks and please use the default browser print function instead.

This page reveals information about the system as a whole. It gives a relative view on how the components fit together, where this pick-up system could be located, possible costs coupled to it, and future considerations.

Specs were estimated from looking at the Amazon Prime Air video since no real dimensions could be found, currently.[1]

Tote has an RFID tag located in bottom right corner of the tote on the front face. 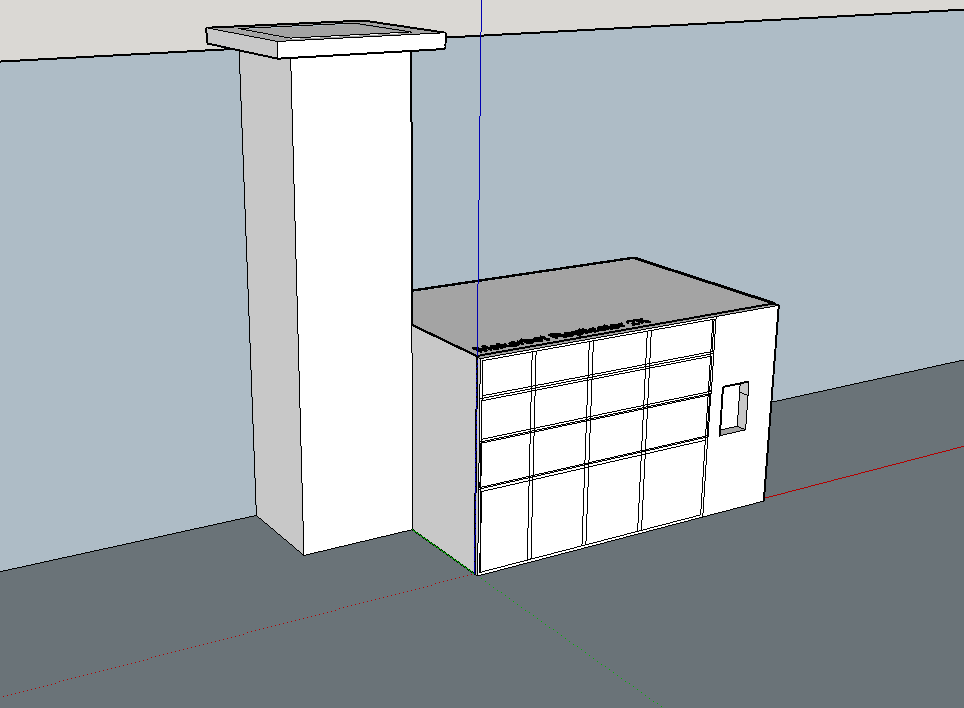 Rough Drawing of how the whole system would look 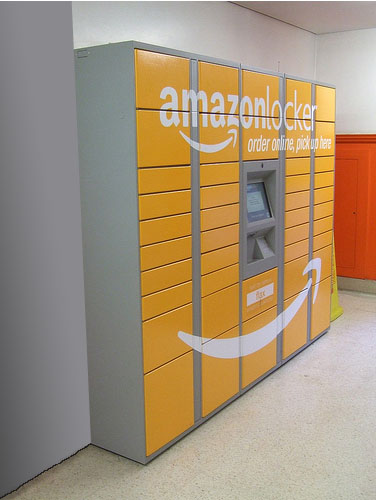 Type of locker system that could be mimicked 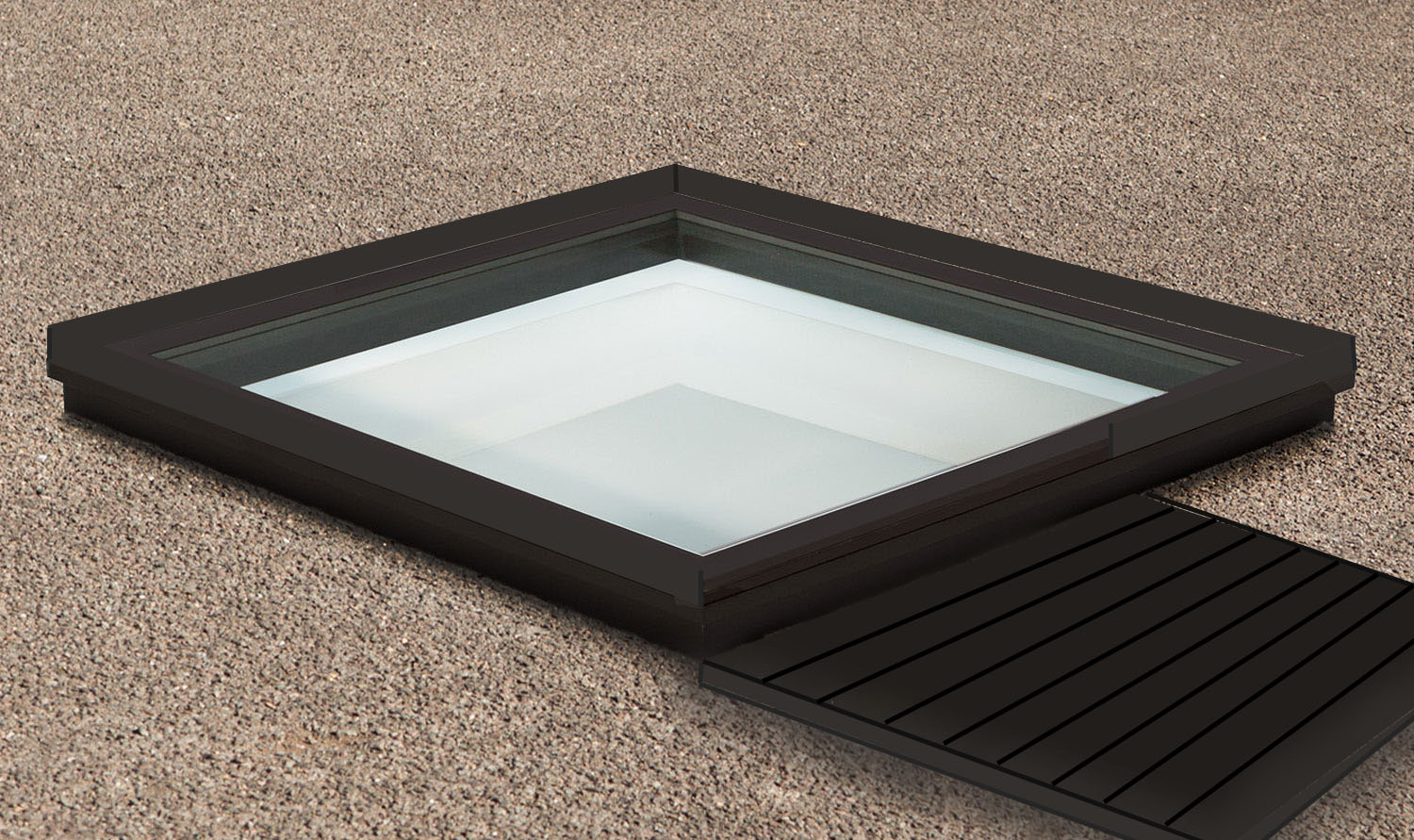 Rough Drawing of the opening platform

Basically, our system consists of four parts, the landing platform on the roof, the chimney, the conveyor belts and the lockers. The landing platform will not be visible for most and it will not be very big or notable. It is a mostly flat structure which will be placed on the roof of the supermarket. The chimney will be visible for customers as it is located next to the lockers as seen in the picture. It will have a simple rectangular shape and can be covered by paint or/and posters. The lockers will be very similar to the amazon locker system, except the arrangement of the lockers will differ slightly as can be read in the Chimney to Cubby part. The conveyor system which gets the package to the right locker will be behind the lockers and is therefore not visible to customers.

The idea for our system is to make it modular. We will have predefined columns with big lockers, small lockers and lockers specific for drone delivered packages. When the system gets implemented in supermarkets, not every supermarket will need the same amount of lockers. There may be multiple supermarkets in the area with the same system which will require less lockers, or it could be the only one at a highly populated area. To make the system more flexible for these different situations we have decided to make it modular. More rows can be added at any time and will be relatively simple to implement.

When a person orders a package that fits the requirements, it will be prepared for drone delivery at a Amazon location as seen in the video. Of course whether or not the package can be delivered at that moment depends on availability, weather and other details. But if it is possible, the user receives an email saying the package can be picked up at the nearest supermarket within an hour. The drone can find the drop point based on GPS coordinates, detailed information about this process can be found in the opening page. The drone will fly to the supermarket, where it arrives at the Opening. The drone will release the package, which will be taken into the system. The package will be moved into the chimney where its RFID tag is scanned. The system will now decide which locker will accept the package and it will send an email with the number of the locker and the unlock code to the person that ordered the package. The elevator will move to the right height and move the package to the conveyor belt. This is where the package will be again scanned using an RFID reader. The system will first open the backdoor of the locker where the package is supposed to go, then the conveyor belt will start moving. The package will slide into the locker after which the conveyor belt stops moving and the door closes. Inside the locker, the package will be scanned again to verify that it has arrived. The package is now ready for the pick-up.

The lockers have a control panel as seen in the image. Here, the user will enter the code from the email. The locker will now open, the user can take his package and close the door.
The lockers that are not used for drone delivery have their package delivered by regular mailmen. We do not know exactly how this system works but it already exists and is in use by Amazon. The pick-up is equal to the previously explained pick-up for packages delivered by drones.

Amazon already uses a locker system which is in some aspects similar to what we are designing. These lockers are located in retail stores, mostly at 7-Elevens. Amazon chose these stores as they have over 50.000 locations and are open most of the time. Details about the deal between 7-Eleven and Amazon are not public but most likely Amazon pays a fee for allowing the system in their stores.
Customers can order a package without worrying about being home at the time of the delivery. Once the package has arrived, they get an email after which they have three business days to pick up the package. At the system, the customer either enters a code or scans a bar code received in the email. The locker with the customer's package opens and the delivery is complete. 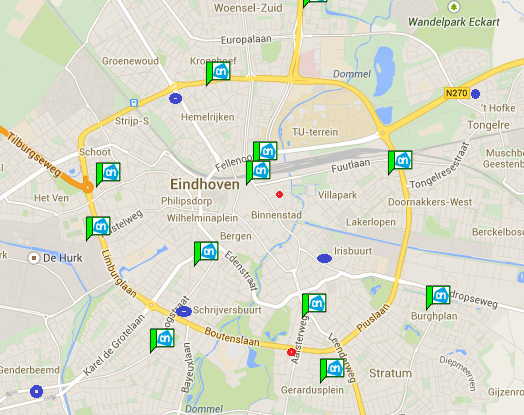 In The Netherlands we do not have a such a large chain of stores. Of course Albert Heijn for example has many locations, but to reach every customer in The Netherlands effectively, we would need to use multiple chains.

In the picture you see the major supermarkets in Eindhoven. The AH logos stand for Albert Heijn supermarkets, the blue circles for Jumbos and the red circles for Jan Linders. As can be seen, if all of these supermarkets would have locker systems, no one would have to travel far for their package. Picture of Eindhoven & its grocery store locations Explanation of who can be reached and why this is effective.
The AH logo's are the Albert Heijns in Eindhoven.
The blue circles the Jumbo's and the red circles the Jan linders.

While designing this system, our construction did not really consider all of the costs involved. Looking at certain design selections such as the elevator or identification software, they reveal to be quite costly.....
Below are the costs of some of the components considered for this current concept:


The prices above are rough estimations of possible components, based on manufacturers websites

As one can see, the current concept sketched in our report needs some more consideration and iteration. We are not technical specialists in this area and people with more knowledge may create a better iteration, however, the goal here was to come up with a well thought out concept which would aid in drone delivery. For example, all the capabilities that the Prorunner mk5 elevator has are not necessarily required for the feat this system is trying to perform, but this elevator does reflect the component that should be in its place. Considering our design requires some adaptation to the current locker systems, the price of production will most likely go up some compared to current parcel-lockers, this is because we have to adapt to drone delivery. Some cost considerations for an upcoming iteration would be to find/create a simpler lift mechanism and possibly find another solution to the conveyors. It, of course, depends on how much an investor wants to pay to make this system work, and if in the end the payoff will be greater than the cost.

The goal was to develop a starting concept that allows drones to make a delivery to a specific location where people can pick-up their package. We did not address all possible scenarios, issues or constraints.

Some issues, constraints, etc. that we have not yet considered while designing are:

N.B. There may be more issues and constraint, but these are currently the main ones we have come up with.

BACK: Software
NEXT: Scenarios