If not done yet, plug in a networkcable or setup your network settings as follows (using your own username and password): 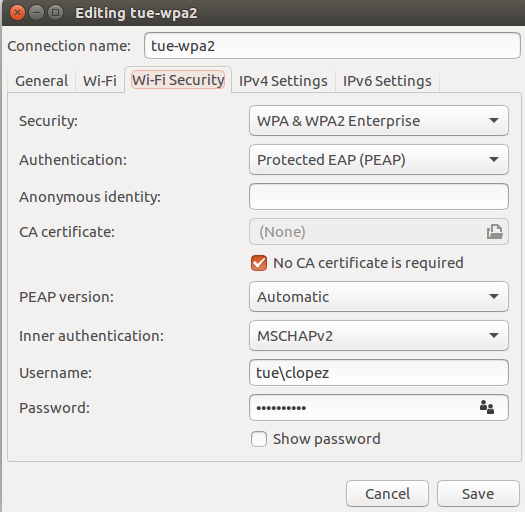 An entire overview to setup the wireless TUe-WPA2 connections is given here.

There are some issues with Ubuntu 16.04 and Nvidia graphic cards. Therefore, before proceeding any further, setup the graphics card driver to avoid that Ubuntu 16.04 freezes. For the 2016-2017 TU/e laptops Zbooks run the following command in terminal (CTRL+ALT+T):

The computer will most probably freeze, thus keep pressed power button to restart. After restart, update and upgrade your software installation:

If the screen freezes before or directly after login, after booting you can open a virtual console (CTRL+ALT+F1) which works according to the same principles as a terminal. Login with the username and password provided during your installation. Now you can execute the commands given above:

Reboot your PC. You should be able to log in without any screen-freezes.

In Ubuntu 16.04 the ethernet naming convention changed. To avoid possible incompatibilities with the examples and tutorials used in the project, we can rename the ethernet device to the standard name “eth0”. Get the MAC address of your ethernet deviouce:

If you see eth0 listed in your devices, then you do not have to change it. Otherwise, create the following file “/etc/udev/rules.d/10-rename-network.rules”:

You need then to restart your computer. Verify that the name indeed changed running ifconfig again.

Several tips for customizing Ubuntu are given on this page of the Embedded Motion Control course.

Once you have Linux up-and-running, we are going to install GitHub.