This wiki describes and explains the software that was made for and implemented on the PICO robot to complete the retake of Embedded Motion Control course 2017-2018. The mission of the retake EMC 2018 is describe in the subsection ‘The challenge ‘Follow me!’’.

The robot that is used during the project is PICO. PICO has a holonomic wheelbase with which it can drive, a Laser Range Finder (LRF) from which it can gather information about the environment (blocked/free space) and wheels that are equipped with encoders to provide odometry data. All software that is developed has to be tested on the robot. There is also a simulator available which provides an exact copy of PICO’s functionalities. PICO itself has an on-board computer running Ubuntu 16.04. The programming language that is used during the course and the retake is C++ and Gitlab is used to store the code.

The main goal is to follow the Person Of Interest (POI) in a cluttered environment. The person closest to PICO is the POI at standstill. The POI will walk a pre-defined route that’s unknown to the PICO. There are targets strip which the POI will cross in the middle. To prove whether PICO is able to follow the POI correctly, PICO should also cross these target strips. A overview of the setup is shown on Figure 1.

The are also other actors present in the area of interest. These actors will similarly as the POI start at standstill. The other actors will also walk around when PICO has started his following-algorithm. The only restriction that the actors have is that they can never occlude the POI, i.e., they can not walk in between PICO and the POI. Figure 2 depicts a situation which can not occur.

For the initial design, the requirements will be discussed as well as the functions and their specifications. Moreover, a list of the used hardware components and the diagram of the interface are shown below.

The specifications are based on the requirements.

The functions that are going to be implemented are subdivided into three different types of functionality. The types are low level, middle level and high level.

To be able to execute the 'Follow me!' challenges the PICO robot, already mentioned above, will be used. The following hardware components will be utilized:

Actuators: holonomic base with three omni-wheels.

The interfaces describe the data that is communicated between the several parts of code. The functions that are discussed in the Chapter Functions are all part of the interface. In the interface there is also a world model. The world model will contain the most recent POI setpoint and the LFR data.The motion, skill and task functions can monitor and request the information that is stored in this world model and use it to properly execute their function. The interface is shown in Figure 3. 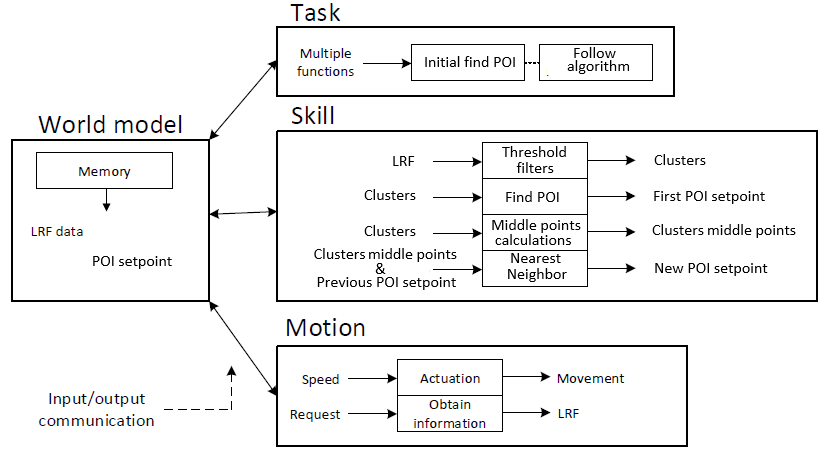 First PICO has to find POI. The structure of the software of these classes is shown in Figure 4. With the LRF data is it possible to find something, i.e, a person, a objects, a wall or disturbance. The LRF data is split into clusters. A cluster is a series of laser points, which are connected to each other. Afterwards it must be determined whether the cluster is, the POI, a person/object/wall or disturbance.

where sum_x and sum_y are the summation of all the x/y coordinates of the laser points in the current cluster. These clusters are then converted to actual setpoints, the cluster of the person that has the smallest distance between the previous setpoint and PICO is the POI. This will be explained in further detail in POI following algorithm (with other persons on the field).

Note 1: At the start there is a person nearest PICO not something else. Note 2: The values for constant1, constant2 and constant3 can be found in the code snippet FindPOI.cpp

POI following algorithm (one person on the field)

The next step, after that POI is found, POI has to be followed by PICO. During the test session, first a following algorithm which is able to follow one person in the field is tested. This person is POI. This test verifies the cluster detection algorithm as explained above.

In the initial phase is init = 0, PICO rotate to POI setpoint. In the flowing part is init = 1, PICO drive then to setpoint.

[math]\displaystyle{ \text{rotate speed} = angle \div scale }[/math] where angle is the angle from PICO to POI.

The flowchart Follow POI is shown in Figure 5. Note 2: The values for the scaling and the max.distance can be found in the code snippet Motion.cpp

POI following algorithm (with other persons on the field)

Film of the final result 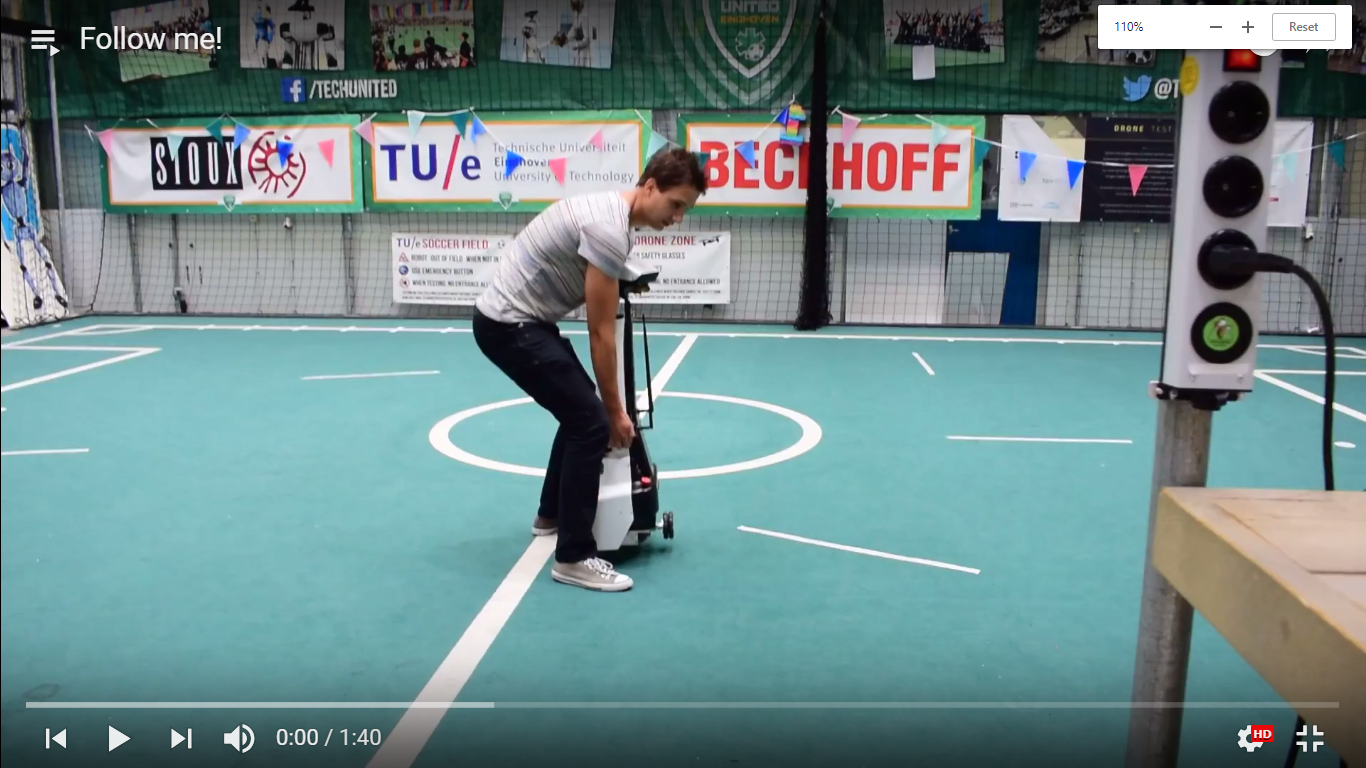 The conclusion is that if the robot can make correct cluster of each person/object/wall then POI can always be found. The 'nearest neighbor' allows PICO to follow POI even with more moving persons.

Other recommendations is to solve level 2 and level 3!