When you are studying you sometimes forget an important meeting, because you are deeply focused on your materials. Also sometimes you need a little motivation to start studying. To solve that problem we are going to develop a clock that displays your agenda. So with one look at the clock you see exactly when you have appointments. Also the clock plans in your study time, when you are free of course and have sufficient time to study. It also gives you a push notification when you need to start studying in the form of a motivational message. This aid can be expanded in the future. With a light function that changes color and brightness according to your schedule. Also it could keep track of the usage of social media on your phone and when you use it too much it shuts it down. It could also be tracked with your webcam if you are truly studying and if not it sends you a notification(should be looked at with privacy regulations). And a lot more.

We as students are confronted with Covid-19 for over a year, which caused drastic changes in our freedom for months. The consequences are noticeable in many areas but primarily in the psychological well-being of students. Since working and studying from home has become a norm, students report feelings of loneliness, less (study) motivation and less concentration. When all fun distractions cannot take place anymore and everyday seems a repetition of the day before, it is hard to stay productive. Therefore, it is important that we come up with a device that will keep students motivated to study and work from home. It has been said that sticking to a set schedule will help when working from home, but in practice this is not that easy. It could be beneficial for students to have some help with this. Help in making an executable and achievable week schedule with clear distinctions between work/study and relaxation. Additionally, the students should be made aware of their social media/ phone use in order to keep them focused and not distracted.

The approach to this project is as follows. Firstly, a literature study will be conducted to find multiple points that can influence or enhance concentration while studying. This might also help increase the understanding of which distractions are most common while studying. Secondly, a survey will be held. This survey is used to confirm the findings from the literature. Furthermore, if the data is gathered from actual students, it will contain practical problems that might not emerge from literature alone. In the meantime, the first bit of code and a very early prototype could be created. After all the data has been evaluated, the prototype can be finished (until further notice). A user-study/usability test will now be conducted to investigate how helpful the product truly is. As a finishing touch, the prototype or code may need to be adapted, dependent on the user tests.

Students want to achieve their degree. In order to achieve it they need to study a lot, which can be very hard in the wrong environment. Therefore they require a stimulating study environment, but also after studying a place to relax and let go of all the stress.

For the users, we primarily based the project on students since they need to plan their own studies. While for people attending high school the schedule is mostly determined by the teachers. We also looked at people working at work so not from home, but that the clock would have the primary function of displaying the agenda. Changing colors and the other future options would be very distracting for other employees. The people working from home on the other hand could use this device since it could change the color and schedule working time the same way as study time for students. But the focus does not lie here and therefore they are the secondary users.

An online survey is made using google forms. In this survey students are firstly asked about their experiences and preferences concerning working/studying form home to get a general idea about their needs. Afterwards they are asked about their opinion on our general idea, to see whether their needs and our expectations are in line. These questions will help us making choices for the design in order to fulfill the needs of the end users.

The full survey can be found here: https://forms.gle/vjDVp6oWTFR5Vjkt6

For a first design idea, we came u[p with a 7-inch display that can be fitted on top of your desk. What the specifications are for this particular design will be determined in a later stadium. But for now, we want you to know how the design will look like. 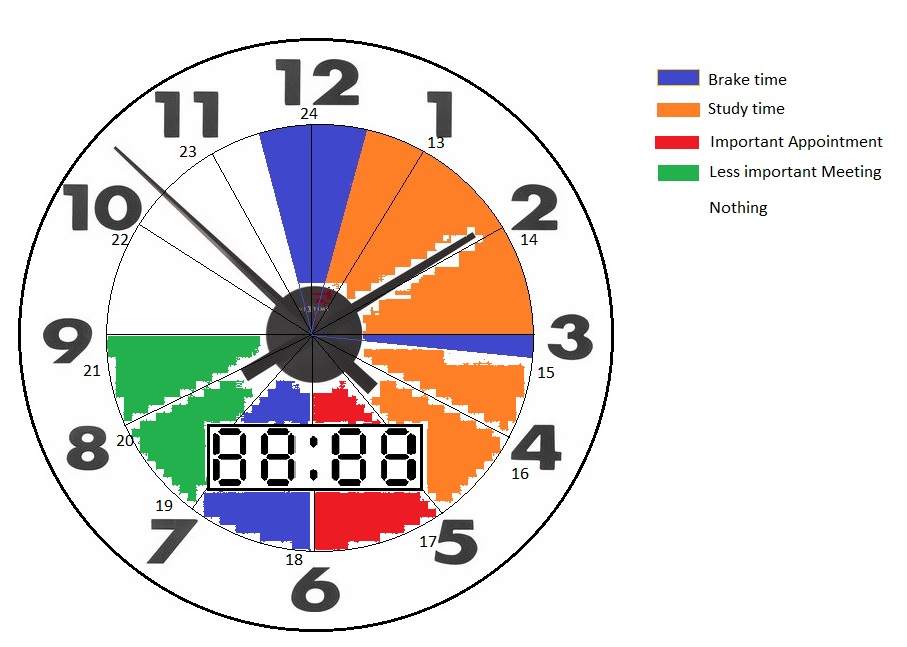 Figure 1:First sketch of the interface

In this figure, you see the first design we had in mind. When you have sufficient free time at a specific moment the clock will schedule study time for you. It will also display your appointments see you have a quick overview of your day. When the clock passes the hour it will automatically update to 12 hours later, for instance from 01:00 to 13:00. This could be altered in the future and depends on what the user prefers. It also should the digital time on the screen for the user that finds this more convenient. This function can be switched on or of in the settings.

The gamification of the learning process shows to have a positive effect on the learning experience. While playing people will be more engaged with the material and be more productive. This helps the student to be more motivated to study. However, this effect is mainly visible in students that are naturally keen on learning / are willing to learn. Students who do not like to learn will have different results. However, the method looks promising.

A student's motivation can be based on multiple variables, for instance: religion, parents, self-efficacy, self-worth and willingness to achieve certain goals among other things. A student’s motivation will have an influence on the way he or she will learn. It will have an effect on the behavior of things like the pursuit of mastery, failure avoidance, learned helplessness, and passive aggression. Students prefer their work to be meaningful and they like to have control and autonomy during their study. However in the end it all comes down to the personal emotions and beliefs of each student to really get a feel for their individual motivation.

This article shows the importance of a good working environment and what kind of effects this can have on the learning behavior and motivation of the students.

This paper shows the benefit of using a VR “game” to perform tests on students with a disorder, like ADHD. Since it helps them to focus better on the different tasks than if they would have done them with paper and pencil. While the test in the paper is focused on a younger audience, 6 to 16 years, it could give an indication for (young) adults as well. There also seems to be a difference in performance when looking at the different genders. The main takeaway message is that VR can be used to help students with a (learning) disorder to focus better by removing distractors for instance.

Eye tracking can be used as an input but also to measure the effect of various learning processes which make use of visual attention cues. Eye-tracking can provide more information on the split-attention effect, modality effect, redundancy effect, goal-specificity effect. The information gathered can be used to optimize learning strategies or layouts.

According to this article wavelength, duration, and intensity of light exposure modulates brain responses. Immediately after light exposure, you can observe physiology, for example, heart rate, sleep propensity, alertness, and body temperature. The non-visual responses are maximally for blue light (480nm) while the spectral sensitivity of classical photoreceptors is maximal for green light (550nm).
Also, cognition is affected by light in which we are interested the most. Because this includes attention, executive functions, and memory. These cognitive performances decline during the biological night and progressively improve during the biological day. The light could affect cognitive performance through its synchronizing/phase-shifting effects on the circadian clock. Also with light exposure, cognitive performance can be increased acutely.
From the article, we can conclude that exposure to blue light gives the highest brain-responses ranging from a few seconds to about 20 minutes.

According to this article students are very fond of using social media such as Facebook, Twitter, YouTube (based on the social media form 2013). The colleges are now pushing the classroom through social networks. Also, most of the information on social networks is fake or half-truth which could be a problem for students. Also, the students become addicted to social networks, which also means that their real-life friends become less in numbers while the digital friends become more and more. Too much of anything is good for nothing.

From this article, we can conclude that social media usage has increased very much between 2005 and 2015. From which we can only imagine that the trend continued to 2021. So the usage of social media is enormous. Young adults between 18 and 29 years are most likely to use social media 90% of this group uses social media.

Humans have a circadian rhythm from approximately 24 hours, including being awake and asleep. This process is regulated by neural and hormonal processes. This process is being synchronized by the solar night and day. When far from the equator this internal clock can be disrupted by the short days and long nights (for half a year) which results in fatigue, sadness, and sleep problems. When you are indoors for a long time indoors during the day, windows are very important. Dark environments can have a negative effect on well-being and work capacity.
All types of light within the visual range can have an influence on the biological clock. Bright is more effective than dim light and white or daylight more effective than colored light(possible with some exceptions).

In this paper, good study habits are discussed. The most important conclusion from this paper is that to form effective study habits you should have good counseling. They help you with a proper study schedule. They also note that a study should be divided into three periods where the subjects should be divided into relative importance. Also, a good schedule is very important in maintaining a good study schedule. And one point they note is: Do you have enough light in your study place?