During the meetings with Joop, there were always thought of new ways to control the guitar. To try out all these ideas, an experiment should be conducted. In this section all these ideas will be explained and a possible method of testing will be presented.

In this section will be a list of stuff that is bought for the tests with the links shops where they were bought. Not everything on this list used in the experiments but they are probably necessary for future experiments.

Max MSP is a program which lets you combine different objects to create programs that can be used for anything, from audio to video processing.
For experiment 2 it is used to process midi messages and output a new one. A picture of the program is shown below. The picture is divided into sections. Every section has a function. Notice that every text label in the pictures are in Dutch. Our user is dutch, therefore all the labels are also in Dutch.

In the third section, the played note from the input is added to the base note from the guitar string and is outputted to the chosen device from section 2. The add object only outputs a new value if the first input of that object is triggered. Connecting the on-set to that input ensures that only on on-sets the note plays. The user can, i.e. a knob, with Control Change value of 74, to set the standard velocity of the played notes. This means that the notes cannot be played dynamically. Still, the velocity of the played note is routed to this section. This value is then set to either 0 or the value set by the knob.
At the bottom of the section, staff-lines are shown. On these staff lines, the played note is displayed.

Lastly, in the fifth section a signal is send on closing the window. This triggers a message that stores all values present in all the number objects in this patch. Saving these settings can also be done by clicking the button in this section. Futhermore, on start up all these settings are reloaded using the loadmess object. This object also triggers presentation mode. This mode is explained in the next section. Lastly, here you can also see some text which is used to explain the buttons and numbers in the presentation mode.

In section 1 and 2, the user can easily pick the in- and output devices for using the program. This is fairly straight forward.

In the next section, the note that is played will be displayed. The button above the staff-lines indicates an on-set.

The fourth section contains the tuning of the open strings. The tune of a string can be changed by clicking on the staff-lines or using the number box on the bottom. The two buttons at the top of the section will the tuning to the major or minor scale, respectively.

In the last section, the user can save the settings of the program. This mainly includes the tuning of the strings. The user can also view the volume of the played notes. 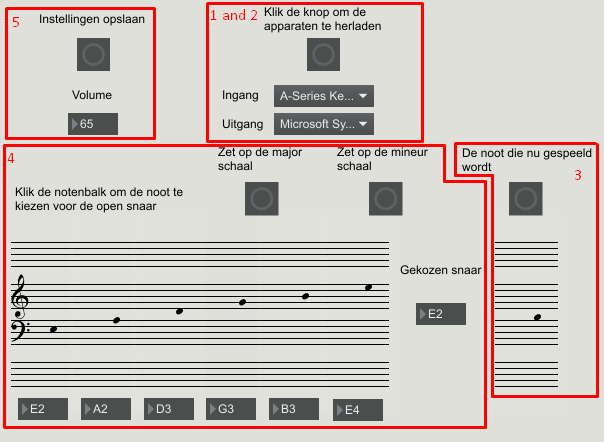