This is the wiki page of Group 4 of USE Project: Robots Everywhere.

For this course, we've made a prototype of a "Smart Bedroom" using an Arduino unit connected to a laptop. Our idea of a Smart Bedroom is a bedroom filled with electrical modules that are controlled by a central computer, which automatically commands them to simulate the sunrise and morning sounds in order to wake up the user in the most natural way possible. So the Smart Bedroom basically replaces your alarm clock and makes sure you're well rested and cheerful in the morning. The sunrise is simulated by a combination of a light sensor mounted on the outside wall of the bedroom and automatically controlled blinds and lights. Another module of the Smart Bedroom is a thermostat that gradually heats up the room when it's time to wake up the user. Morning sounds are provided by your smartphone, which also acts as a user interface for the entire system. Furthermore, the smartphone records the sounds the user makes when sleeping, most importantly his/her breathing, in order to determine how deep he/she sleeps, which is necessary to find out when it's a good time to wake him/her up. Through research, we found that waking up during light sleep is much more comfortable than during deep or REM sleep. Setting the time period during which you want to wake up is also done via the smartphone.

For our prototype, a few concepts had to be simplified or even scrapped entirely. Naturally, the thermostat and blinds were off the table, which also eliminates the need for a light sensor. None of us have experience in making apps, so we decided not to use a smartphone as well. Instead, the laptop acts as a kind of user interface. The prototype consists of three scripts written in MatLab which is aided by an Arduino unit. The Arduino contains a microphone that records the user's breathing sounds and an LED that produces light. The laptop translates the sound measured by the Arduino into a graph showing the sleep deepness and uses that to decide when to start the wake-up procedure, which consists of gradually turning on the LED and producing morning sounds with the laptops speaker. When the user has woken up, which he/she indicates by pressing any button on the keyboard, the opportunity is given to provide feedback about the sound volume and light brightness, which is taken into account the following nights. 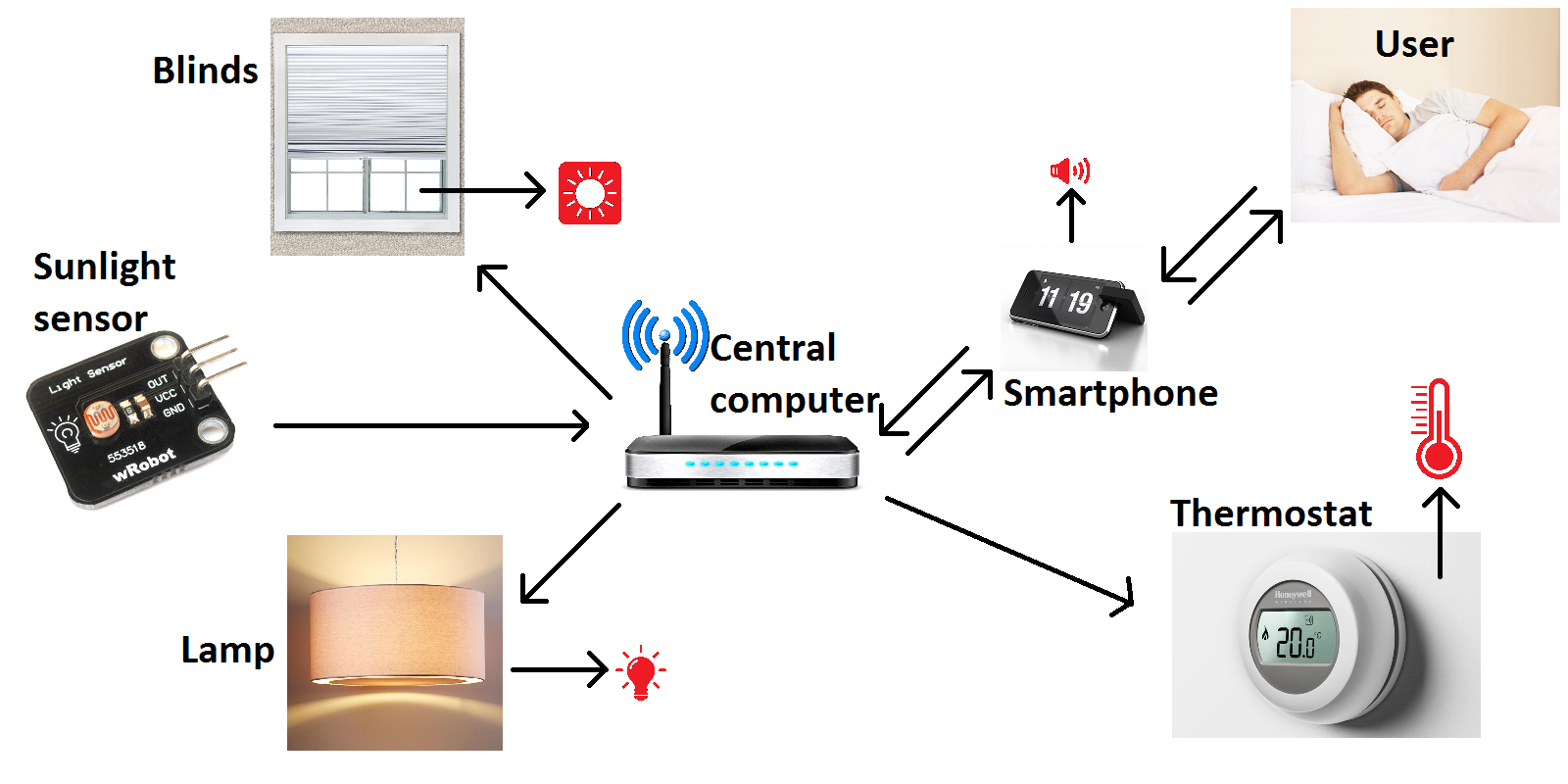 A visualization of our initial idea of a Smart Bedroom.

We started off this project with a dream: a high-tech automated bedroom that wakes up the user in the most natural way possible, but still in time for him/her to go to school for example. We were heavily inspired by the smartphone app called Sleep Cycle. This app uses your smartphone, which would be put beside your bed, to record the sounds you make while sleeping. This involves breathing as well as movement. The data is then used to calculate how deep you sleep. The app wakes you up within a chosen time period during light sleep, which is more comfortable than being woken up during deep or REM sleep. To wake you up, the smartphone plays a selected tune which sounds very relaxed and natural, like birds singing in the morning for example. When you've woken up, the phone provides information about how you've slept, most notably a graph showing the deepness of your sleep through time. This information can be compared with that of previous nights and of other people thanks to the internet. More information can be found on http://www.sleepcycle.com/.

Our idea is the Smart Bedroom. This is a bedroom which will be controlled by a so-called smart alarm. The smart alarm will analyze the person in the room when he is awake and when he sleeps. The smart alarm can also control the lights and blinds in the bedroom. The purpose of a smart alarm is to let the person sleep as well as possible. This alarm can be very useful for people with insomnia.

A very precise method for measuring the heartbeat is with infrared radiation. But this method is still in development and will be very expensive. So we will use another method, namely sound recognition. This method measures the sound of the person breathing and translates this to a heartbeat. But a downside of this method is that it has to be calibrated over a few nights to get a good estimate. Sleeping together can also be a problem. But this method is able to be used nowadays and is cheaper than infrared radiation.

Here's a short story to illustrate our idea:

John is a student at the University of Technology Eindhoven. He has trouble waking up in the morning, so he decided to invest in a Smart Bedroom. When John goes to sleep, he sets the wake-up time to anywhere between 7am and 7:30am on his phone. Now it is time to sleep. The bracelet John is wearing is measuring the heartbeat and sends data to his smartphone. Also, his phone checks his movements to see in what phase of the sleep cycle he is. Around 7am, the Smart Bedroom notices that John almost completed a sleep cycle. Since John will have completed this sleep cycle during the wake-up interval, the Smart Bedroom lets him sleep a little longer. When John is close to finishing his sleep cycle, the Smart Bedroom instructs the windows to let more sunlight pass through and also raises the temperature. When getting closer to finishing the sleep cycle, more and more sunlight will pass through the window and the temperature will keep on raising. This allows a much more natural wake up than usual. The sleep cycle has ended but the smart bedroom notices that John is still asleep even though all sunlight is going through the window and the temperature is raised to the maximum level allowed, so it decides to play a relaxing sound which builds up in volume to force a wake-up. Finally, John wakes up at 7:20 am and he is not as sleepy as usual. He is able to get out of bed without any problems and is ready for his day at the university. John also rates his sleeping experience on his phone and the alarm will use this information for the next night.

The user will benefit from the smart bedroom because this integrates his blinds and lighting into his smartphone. This is the first step towards home automation. By crossing the barrier of combining your living space with your mobile devices, it becomes very easy to expand on this.

The Smart Bedroom helps to battle tiredness, and therefore also stress, which can also be considered a benefit for the society. Besides tackling tiredness in general, the Smart Bedroom is great for people with problems getting asleep.

Due to the integrated lighting and blinds in the bedroom, it becomes possible to sleep during the day. This possibly opens up all kinds of new lifestyles, such as working in multiple shifts during 24 hours and decreasing the morning and evening commute by spreading the starting hours throughout the day.

A good night's rest greatly improves productivity, which is good for both society and enterprise. Through the Smart Bedroom, we can open a whole new market in home automation, enabling many new jobs, startup companies and other benefits to the enterprise. If you once again consider working night shifts, you'll see this is beneficial to enterprise as well, in decreasing the size of offices, as not everyone has to work there at once.

Listed below are the needs of the primary, secondary and tertiary users. We will mainly focus on the needs colored in blue.

The person who sleeps in the smart bedroom

Other users sleeping in the smart bedroom

People living with the primary user

Scientists who collect the data on how people sleep

Engineers that install and service the smart bedroom

Medical personnel for people who need monitoring when sleeping

Our final product exists out of several components, which have each his own function. The data during the night will be gathered with an Arduino and sound sensor. Gobetwino logged the real-time data to a .txt file on the computer. Matlab, a calculation program on the computer, will process this logged data real time. Finally, Matlab will determine the best wake-up moment. At that moment, Matlab will start the alarm which will build up in volume. The computer will be used to play the sound. Matlab will also turn on an LED, which will also build up in brightness. When the user is awake, the Smart bedroom asked the users experience, and will use this feedback the next nights.

The sound will be like our ideal situation. Before the outer-and-outer wake-up time, there will be played a relaxing sound of singing birds. And at the outer-and-outer wake-up time, there will be a more irritating standard alarm to be sure the user will wake up. However, the lights aren't like in our dream scenario. In our dream scenario, the smart bedroom will control the total room. Then, the Smart alarm can open the blinds more and more if it's light enough outside. Otherwise, the Smart bedroom can put on the lights of the room more and more. But our final product can't control the blinds or lights in a room. Our final product mimic this actions by using an LED. This LED will be glow more and more, like the brightness in the room will do in the dream scenario.

Our final product isn't a completely finished product which is ready for consumer use. It's a prototype which isn't really userfriendly. Now, the user has to do many actions before the Smart Bedroom is ready. The user has to do the following steps now:

So, this is much to many actions for a consumer. But a number of actions isn't the only thing why our product isn't ready for consumer use. The interface is also very primitive. For example, now you've to fill in the wake-up time and interval in the script.

Below are several links which have each have another function. In the first link 'System input and output' a overview is shown of our dream and the product we realy gona made. In the link 'Measurement plan and experiments' is the measurements located. The results of the experiments we did, the made trade-offs and justification of the method of measuring can also be found at this link. In the next three links, 'input', 'algorithm' and 'output', the whole code is described. In the link 'input' is the arduino code described for sampeling the sound. In the link 'algorithm' are the matlab scripts explained which finaly determined the ideal moment of waking up. And the link 'output' described the working of the output script and the made trade-offs. Finally, in the link 'conclusion', not only the conclusion will be given, but also the futher improvements and the reflection.

In the link 'literature' can be found some background information about some specific topics. For example about the sleepcycle in genaral, the ideal moment of waking up and the influence of light, temperature and sound during your sleep. The information about this topics is used by making decisions during the construction of the algorithm.

In this appendix should be a zip-file posted with all needed scripts to use the Smart Bedroom by yourself. (if you have the right Arduino, sound sensor and logging program) That zip-file contains all scripts, including the feedback-mechanism and audio-files. But it's impossible to upload a zip (with such a size) on the wiki, so we will mail you the zip-file.