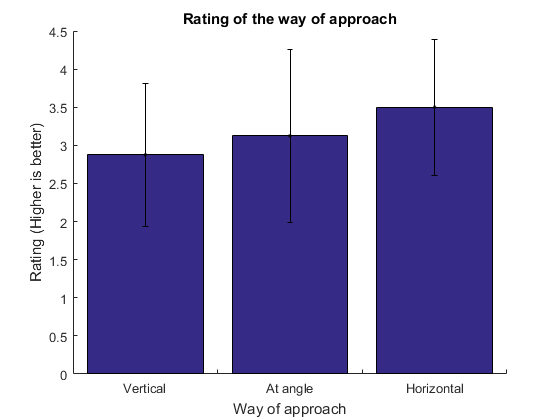 As can be seen from figure 3 the best way of approaching the user is while flying at an angle. Flying horizontally to the user seems better at first, but since the error is bigger than it is at approaching at an angle it's safer to use this way of approaching. Keep in mind that their where only three test subjects used, the results aren't trustworthy and more test subjects have to be used to give a trustworthy conclusion.

Something that is clear is that the user prefers an approach at which the drone is under the eye level at close distances. A possible explanation for this is that when the drone is under eye level the user has to look down. Looking down unto the drone gives people the feeling that their more dominant, i.e. in control of the situation. Looking upwards, when the drone tries to land vertical for example, gives the opposite feeling, that the drone is in control. In a situation where the user isn't into control it can be wise to at least give the user the feeling their into control.

In designing a technique it is not merely about finding a technical working system that solves the problem. User preference play a big role in the succes or failure of such a technique. The first question appears: What are the user preferences concerning this system? Two user preferences that will be tested for are: The distance to keep between the user and the drone, also the optimal distance for landing. And the way of approaching the user. These experiments will be further explained in the chapter 4 Research. Below the question of 'Who is this user and what are his or her preferences?' is answered.

Users can be categorized into three different catechories. Primary users are the users that the technique is aimed at, the main people to interact with. In the case of the delivery drone these are the people that will have their package handed over by the drone:

Secondary users are the people who also will be making use of the technique, but have less direct contact with the drone than the primary users. Some secondary users of the delivery drone are listed below.

The last group of users are the tertiary users. This group often contains the users that are only incidentally contronted with the technique, people working in the same environment or people who perform maintenance on the drones for example:

The main focus of the project will be interaction with the drones of the primary users. Therefor an indepth analysis of these users and their needs is needed. Other users however may play a part in this project as well, so for some their needs will be illustrated briefly as well.

General primary user needs for drone delivery are fast, thrustworthy and safe delivery of their packages. Note that no discrete values can be given to what is fast, thrustworthy or safe delivery. In the scope of the project these needs however are slightly different. Safety still remains a priority, the user should in no way be exposed to risky and or dangerous situation regarding the drone. Since the flight of the drone to the adress is assumed to be no problem, fast delivery falls a little more to the background. Thrustworthy delivery remains an user need, but its meaning changes with the context. Here thrustworthy delivery is not so much about not damaging or losing the package on the way, but rather about a being able to find a location to land no matter the environment. Last an extra user desire comes within focus, the comfortability of the delivery. This involves the drone's behaviour towards the user which should not only be safe, but also feel safe and comfortable.

Companies and shopkeepers will be the ones providing the service of drone delivery. Therefor they will take a large portion of the responsibility for the drones. Their needs will lay in reliability of the drones. Another important need for companies is for the drones to be cheap, or at least affordable. A right balance between price and quality must be found. Also for they are to provide the service to the consumers, consumers needs automatically become needs for companies and shopkeepers as well.

Of course with the increasing use of drones, developers and drone-producingcompanies will be able to make money with it. Also new developments will be stimulated. For companies producing drones, the ease of producing will be an important need as well as the expense of separate parts.

Generally, taking full responsibility as the drone producer can be seen as a generous gesture towards customers and will also push the development of autonomous vehicles onto the main audience. Other autonomous machine producers have already done so: "Volvo, Google and Mercedes have now all said that they will accept full liability if their self-driving vehicles cause a collision" \cite{onl:elmer}.

The primary need for mechanics is that the drones are easy to repair or preform maintenance on, as well as safety doing.

A need or wish for safety instances it to have the drones to be able to fly without accidents, for their priority is to provide a safe living environment. And in case of an accident, which will unfortunately be inevitable, the damage must be minimal.

For people walking/using the streets the main need concerning drone delivery is to be able to walk the streets safely without the fear or risk of an accident.