Introduction to the course

The subject of the course is to program a robot (PICO) in such a way that it is able to accomplish certain tasks autonomously. There are two challenges that need to be tackled. The first challenge is an escape room, which will have rectangle shape by approximation that consists of one exit. The robot is not allowed to make contact to the wall in this challenge. The second challenge will be the hospital challenge, in which the robot needs to visit certain cabinets in a predefined order. During the challenge, the robot is not allowed to touch static objects, such as the wall or doors, or dynamic objects, such as people.

For the escape room challenge, there are only two extra needed requirement, both given by the client, which are the following:

The requirements needed specifically for the hospital challenge are listed below. In this list, the first four requirements come from the client, while the others are decided upon by the group, in order to improve efficiency.

The functions that specify what the software needs to enable the robot to do are as follows:

The software consists of multiple components. These components are as follows:

Interfaces link the different components of the software. The interfaces can be seen in the following figure: 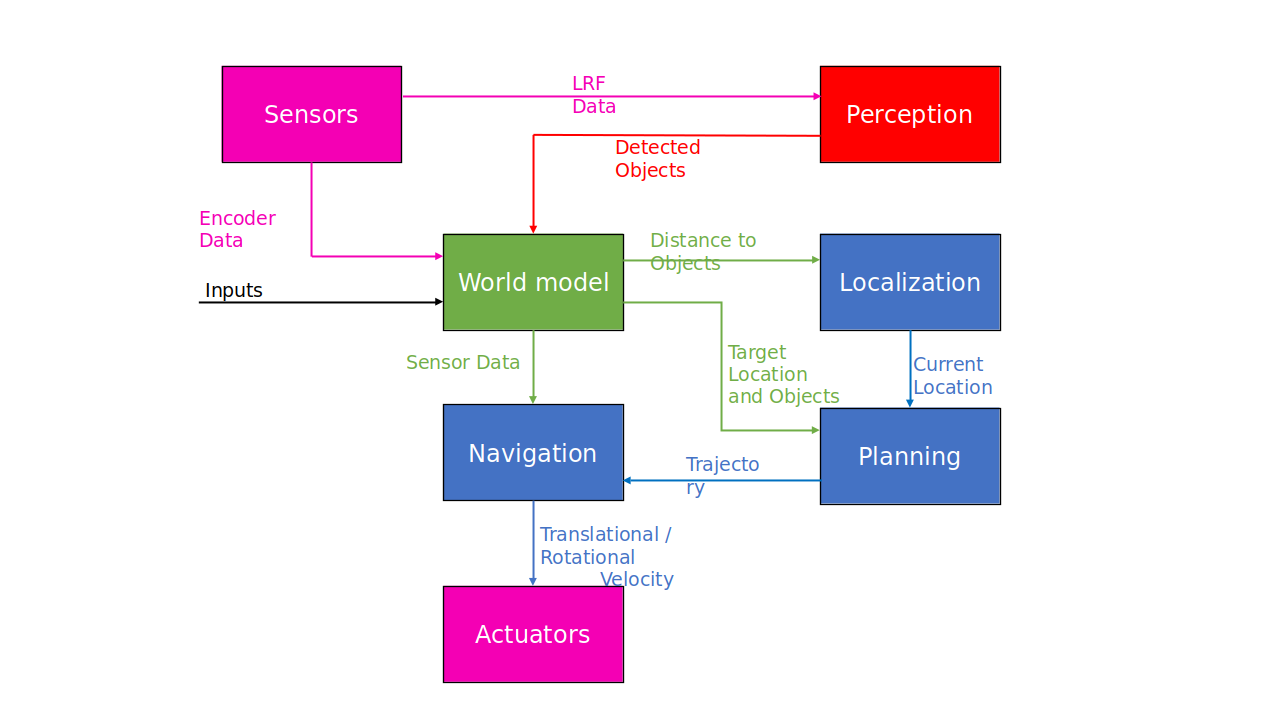 Here, the inputs of the world model include the target location(s)/goal, which for the escape room challenge is "leaving the room", and the information that is known before hand, such as the lay-out of the rooms in the hospital challenge. Also, the world model is used to store known data.

In order to complete the escape room challenge, multiple strategies can be applied. In order to compare strategies and to be sure that there is at least one working strategy, two are implemented. The first strategy is following the walls, either clockwise or anti-clockwise, until the robot has left the room. This strategy is probably not the fastest, as you will travel a greater distance, but it is a safe option, as you will always end at the exit, because this is where the walls end. The second strategy consists of multiple steps. The first step is scanning the whole room and based on the LRF data determine the location of the corridor/exit. After determining this location, the robot needs to then drive to this point straightaway. When the exit is localized, it is known that the robot needs to only drive forwards until it has crossed the finish line. 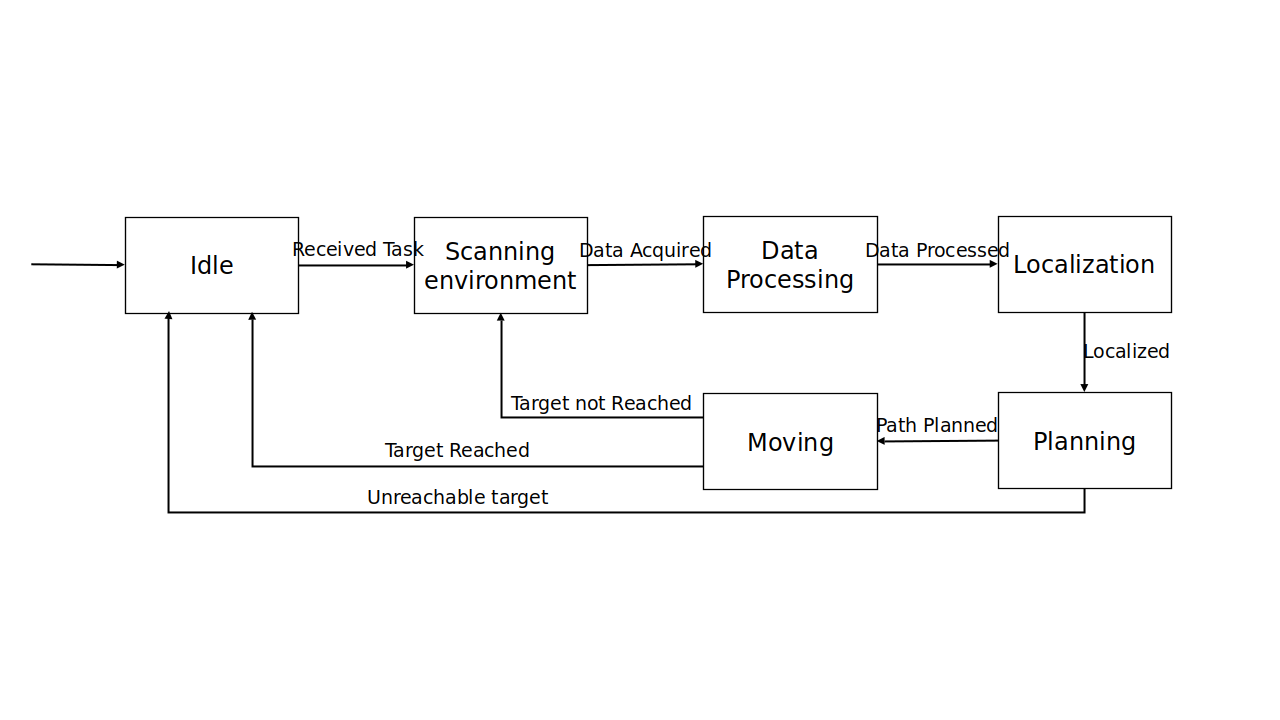 To extract the relative location of the walls from the ordered LRF data, the split and merge algorithm has been used. This algorithm determines a list of start and end points and/or indices from a set of points in Cartesian coordinates. The procedure is as follows:

An improvement, which is not implemented for the escape room challenge, is to afterwards perform a least square fit for each line segment to improve the accuracy of the wall localization.

A set of vertices of start and end points is not yet useful without classifying the type of endpoint/corner. A distinction is made between 1) an inside corner, i.e., corner in the room, 2) an outside corner, i.e., corner connecting the room to the corridor, and 3) an endpoint, i.e., point which is not part of a corner. The type conditions are the following, note that the conditions are checked in the order they are presented:

Remark: during testing it turned out that this classification is the main cause that the objective is set incorrectly, since these conditions do not uniquely indentify these types. To solve this, new conditions need to be set.

Based on the classification of the vertices that are start and/or end points of line segments, the objective can be set. The following situations have been thought off. Again, the conditions are presented in the order they are checked.

A potential field is implemented to avoid collisions with the walls of the escape room. All laser measurements with a distance of less than 0.5 meters to the robot are used to generate a repulsion field. This is done by taking the vector from the robot to each measured point, reversing its direction, and using its length to determine a length for the new vector. The new length is determined such that the new vector is longer if the robot is closer to a measured point and infinite if the measured point has a distance of less than 0.1 meters to the robot. All vectors are added together to obtain the repulsion vector. The coordinates of the goal are used as an attraction vector. The repulsion and attraction vector are multiplied by a weight that can be used to determine which is more relevant. The repulsion vector and the attraction vector are summed to obtain the potential field's direction and magnitude at a specific point in the robot's spacetime. Using the weights the potential field is implemented as follows: The repulsion vector is used only to actuate the holonomic base. The rotation and forward velocity are only actuated by the attraction vector.

For the back-up method, a wall following approach has been chosen. When the algorithm is executed, the robot drives forward until it encounters a wall. It detects this wall, using the laser range finder. When the laser range finders detects data points closer to the robot than its set threshold, it classifies the scanned object as a wall. This threshold is set to be 0.4 m, seen from the origin of the robot. When a wall is detected in front of the robot, the robot turns 90 degrees clockwise and precedes driving forwards, keeping the distance to the wall right from it at the set threshold value. The robot continuous doing this, until it reaches a new wall, at which point the robot turns 90 degrees clockwise again, or until the robot reaches the end of a wall. The end of the wall is again detected using the laser range finder and is recognized based on the fact that the set threshold of the distance from the robot towards the point right from the robot is no longer met. When the end of a wall is detected, this means that the robot has located the corridor. Therefore, the robot turns 90 degrees counter-clockwise, entering the corridor. In this corridor, the robot again keeps its distance to the wall right from it on the set threshold and precedes driving forwards, until it has finished the challenge.

In case the robot classifies a data point from the laser range finder as being closer to itself than the radius of the robot, this point is disregarded, in order to prevent it from influencing the behavior of the robot.

During the escape room challenge, the robot behavior was as expected. The feature recognition is designed to localize convex corners and end points of lines, on which the location of the door was based. During the escaperoom challenge the robot first moved to the far end of the room, this was caused by the fact that the wall on the far end of the room was too far away to be recognized by the laser range finder. Because of this, two end points where localized by the feature recognition algorithm, making the robot think it has found the exit and drive towards the goal set by the objective calculation. Once the robot arrived at the dead end at the end of the room, it rotated and re-localized a new goal, this time at the correct exit. The robot then managed to drive towards the correct goal and finish the escaperoom challenge well within time.


The robot could have finished sooner with a more robust feature recognition algorithm. For example, a threshold could have been set on the maximum allowed distance between convex corners and line end points, this may have avoided that the robot first drove towards the wall on the far end of the room. The robot would then take more time to rotate and find two points which are within this threshold, improving the localization of the exit. Which ultimately makes the process of exiting the escaperoom more efficient.