In situations where there is increased stress on hospital systems (in cases of pandemic for example), it is a common occurrence that hospital staff work overtime and are too few in number to meet the workload. In such cases, there is possibility of reduced quality of service that can be provided to the patients undergoing treatment. There are several ways to combat this problem. The most effective solution is to incorporate autonomous robots that can reliably perform those tasks which do not necessarily require the expertise of hospital staff such as doctors and nurses. This will free doctors and nurses to engage in more important work. The behavior of the PICO robot has been designed to perform the task of reliable point to point motion. The robot is able to move from any starting location to a desired target location while seamlessly avoiding obstacles and walls. The design of this complex behavior of the robot is accomplished in two stages.

In stage 1, the robot behavior is designed to tackle the obstacle room challenge, where the robot has to exit a room as fast as possible. This stage will form the foundation of the PICO behavior upon which additional capabilities are to be incorporated (in stage 2) to obtain the finished product.

In stage 2, additional capabilities such as obstacle detection, obstacle avoidance, target identification and many more are incorporated for the purpose of passing the Hospital Challenge. Completion of stage 2 will result in our finished product, PICO for Hospital applications.

We have created a design document to facilitate the successful completion of the robot design. The design document contains information regarding various aspects such as robot requirements, software functions that contribute to robot behaviour, components of the robot and their specifications, interfaces and many more. This document will be the platform on which the entire robot design procedure is carried out.

The escape room challenge comprises the first stage of the design of the autonomous robot. This challenge was performed virtually using a simulator with the designed robot behaviour. The Escape Room competition is subject to several environmental and challenge specifications, which are provided below:-

1. PICO should not bump into walls
2. PICO should make at least one sensible move every 30 seconds.
3. Total time to complete the challenge is 300 seconds.
4. Maximum translational speed of the robot is 0.5 m/s and the maximum rotational speed is 1.2 rad/s.

The behaviour scheme designed to tackle the Escape Room Challenge consists of 4 Finite State Machines (abbreviated as FSM), which are as follows:-


FSM 1: To detect wall
FSM 2: To align with wall
FSM 3: To follow wall
FSM 4: To enter the exit corridor when it is found


The Finite state machine network is presented in figure 1. 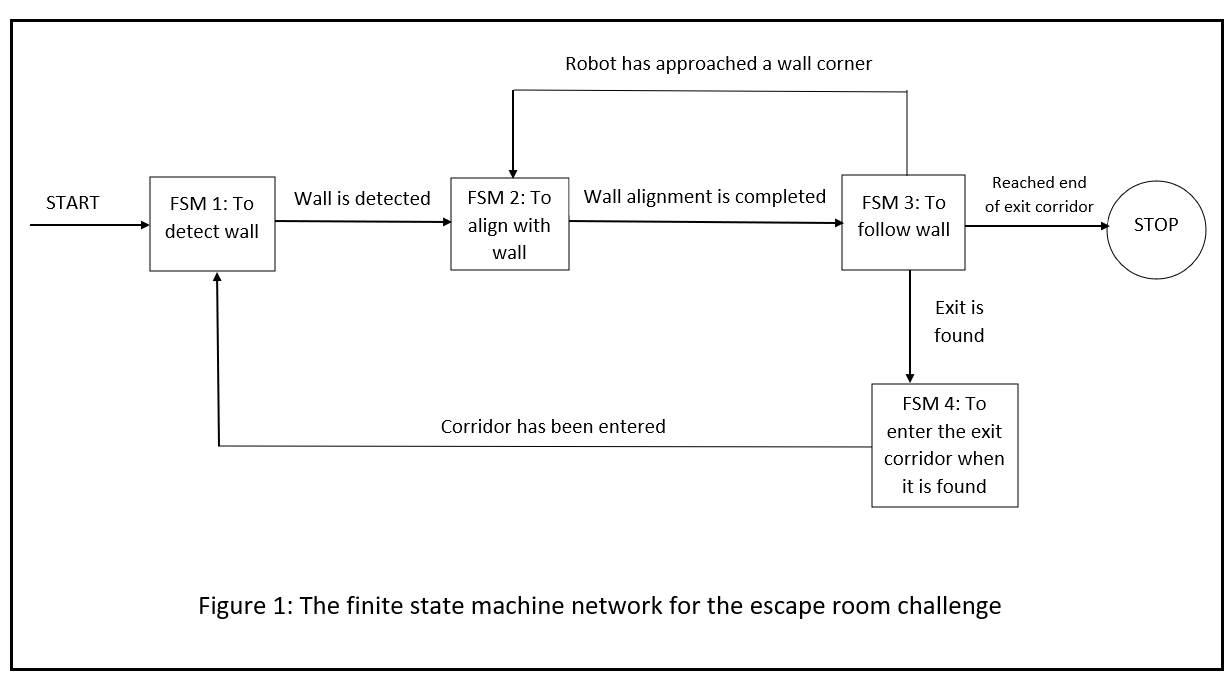 This is one of the most important State Machines in our robot behaviour implementation because the successful and robust completion of the escape room challenge relies heavily upon the ability of the robot to follow walls reliably.
This Finite State Machine was implemented using PID control. The error signal is a scalar defined to be the difference between the preset "minimum distance" (0.35) and the instantaneous distance of the robot from the wall. The control input is the angular velocity of the robot. Once the tuning parameters, Kp, Ki and Kd of the PID controller were tuned, we defined the PID regulation as follows,
control input = Kp*(error) + Ki*(sum of previous errors) + Kd*(instantaneous rate of change of error)

Finite State Machine 4: To enter the exit corridor when it is found