The design document can be found here and contains our interpretation of the requirements, functions, components, specifications and interfaces for both the escape room and hospital challenge.

In the escape room competition, PICO will first simply drive forward until PICO finds a wall. When PICO is at a certain distance from the wall, it will start to turn until the wall is on its right side and parallel to its driving direction. Afterward, PICO will follow the wall and the following corners. This will go on until PICO passes the finish. 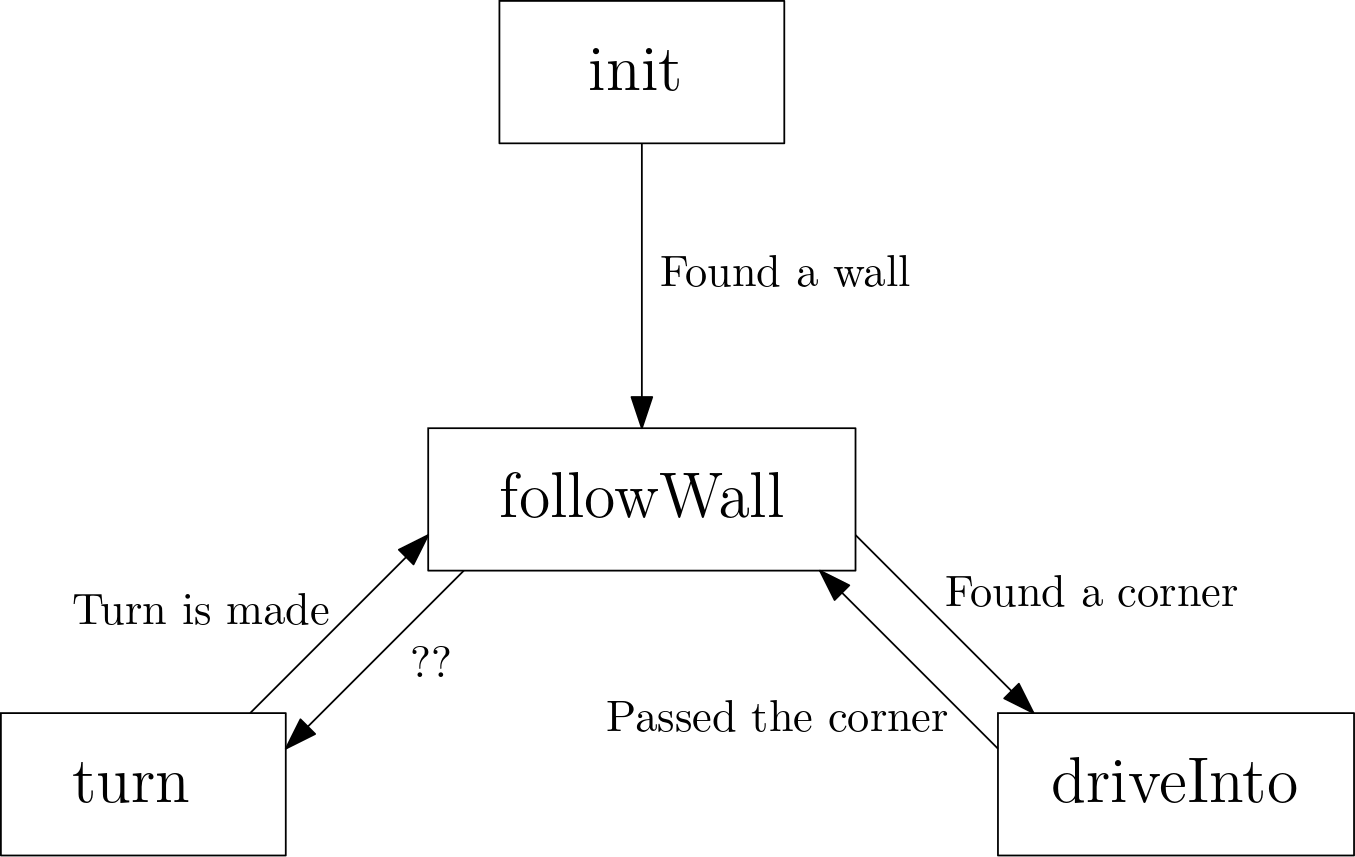 state: intialization named "init" PICO will continuously check if it is close to a wall.

state: turning 45 degrees named "turn" The angle with respect to the start of the turn is measured.

state: passing the convex corner "driveInto" The x, y distance and angle with respect to the start of the state is measured.

To make sure PICO will perform as expected during the competition, a couple of use cases are made to test its performance. The use cases are several different maps and different configurations within those maps. In these maps the environment specifications, such as crooked corners and walls but also a very small room or very large room, are incorporated as good as possible. The image name, the word thumb then the caption :

For the Hospital competition, the basic information flow diagram is shown in Figure 3. Starting from the input of the LRF data, the data is transformed using several functions. After obtaining the world model, the starting map can be initialized. Then, path planning can start. In order to do so, a weighted map has to be generated first. Then, by using the current position and goal positions, the (current) optimal path can be generated. This path can then be used by the drive controller to move the robot. By using a 20Hz iteration procedure, the optimal path can be updated according to new findings, such as closed doors or moving objects. 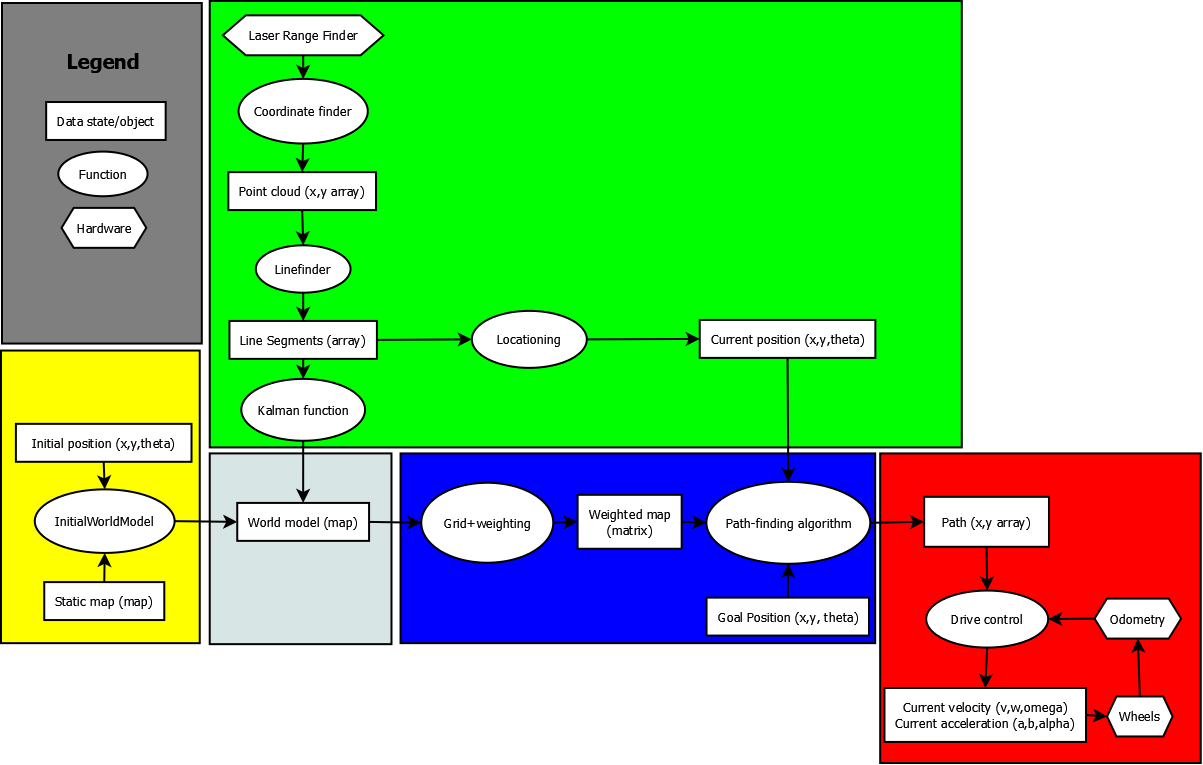 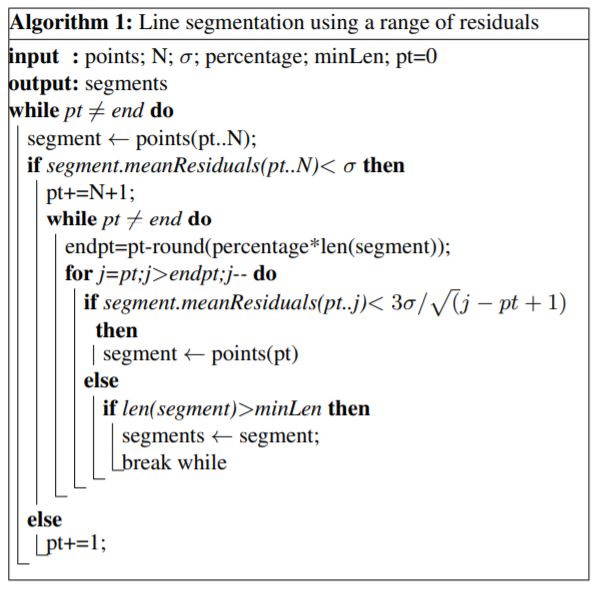 After the computation of the point cloud, the algorithm introduced by Peter et al. (Figure 4) was used to translate this point cloud into a line segmentation.

The world model approach is based on research by Peter et al. (2017) was used. Peter et al. map 2D laser input to line segmentation based on a range of residuals. To use this approach, it was necessary to compute the point cloud from the 1000 laser beams retrieved from the LRF. Computation was done based on the following formula:

The Kalman Filter
The Kalman filter can be split into 4 parts: initialization, prediction, measurement, and update. As can be seen in the figure.

Initialization
In the initialization step, the initial configuration and covariance of PICO are given to the Kalman filter. It is of high importance that the initial configuration and covariance is accurately estimated, since it is the foundation for the following steps. There will be an intial starting area given for the competition. Thus, the LiDAR data will be fitted for this area to find the intial configuration of PICO.
Prediction
In the prediction step, the data obtained from the previous iteration and the data from the odometry are used to predict the new data. The data is described in terms of a reference frame, which is frame O in the figure below. The data measured with the odometry is the configuration of frame 1 with respect to frame 0. This data can be transformed to the configuration of frame 1 with respect to frame O. 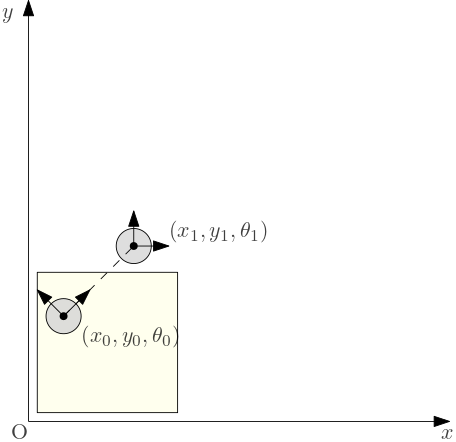 The predicted configuration is obtained by adding up the configuration of the previous iteration and the transformed odometry data. As can be seen in the equations:

In order to formulate the weighted map, a gridmap had to be specified first. This was done by using the provided static map. By finding the given maximum and minimum coordinates, a good estimate of the size of the map can be formulated. Then, a grid based on these coordinates can be given. In example, when the provided JSON static map coordinates are (x,y) = (5,6) meters, and the minumum is (x,y) = (-1,-2) meters. Then the total grid size is (6,8) meters. Then, by dividing this with the wanted grid size (e.g. 0.1 meters), a grid can be obtained. This grid was formulated in a matrix, with size: (xmax-xmin/0.1,ymax-ymin/0.1), given 0.1x0.1 meter grid boxes.

With this grid matrix, weights can be imported and updated using LRF measurement data by using an

We are dealing with a motion planning problem where the goal is to compute a path between the starting point and the goal. We can solve a low-dimensional problem by overlaying a grid on the world model. Within this grid, we can identify which grid points are walls or are within a certain distance from the wall, with a minimum of PICO’s height (given that it has one, because of the holonomic drivetrain, PICO can maneuver sideways). All the other free space can be considered for finding the shortest path with A*. This grid is also known as a weighted map. A* uses a heuristic to guide itself, just like greedy best-first-search. A* examines the path that has the lowest f(n) = g(n) + h(n). Where g(n) is the exact cost (like for the Dijkstra’s algorithm) from starting point to any vertex n. h(n) is the heuristic estimated cost from that vertex n to the goal node. The heuristic can be calculated in different ways: Manhattan distance, diagonal distance, and Euclidean distance. Since PICO is allowed to/can move in every direction we will be using the Euclidean distance to calculate the heuristic for the hospital challenge. The edges of the graph will be the distance between two vertices. Because A* works in such a way that it makes a decision every step of the way, PICO can move forward with these decisions. This helps because closed doors or dynamic objects will be detected and can then be added to the weighted map and we can compute the next shortest path from there.

Get requirements from the Wiki and the slides. Components are in the slides as well.

Include meeting notes on Wiki.

The Wiki will be the final report. So if you update it weekly with the progress and findings it will save us a lot of time in the end.

From now on meetings will be with an agenda and in between SSAs will be made. To find the specifics of the meeting read the notes on the drive.

We did quite well in the escape room competition, by escaping in 44 seconds. However, some implementation of communication from PICO is missing such as SLAM or sound.