The sleepphase could be determined on several ways. It is possible to measure your sleepphase with the aid of your heartbeat, respiration, movements and brainacitivity. Not all, but some of these are useful for our technology. The picture below shows the relation between the sleepphase and these measurable quantities. [1] 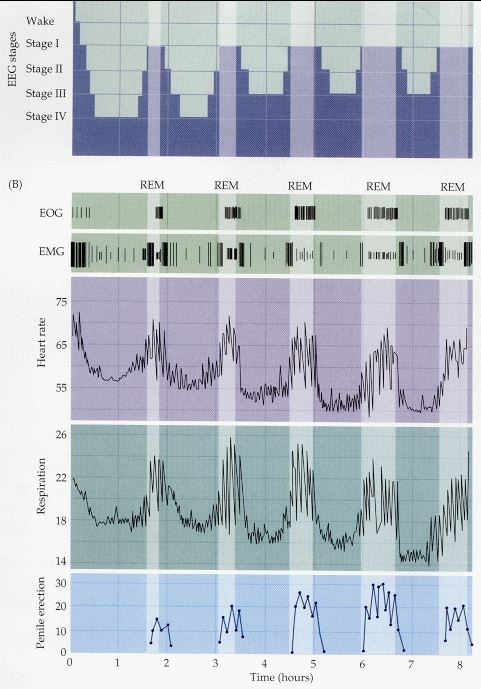 The sleepphase can also be determined with the aid of respiration. As shown in the figure above, there is a strong relation between the breaths per minute and the sleepphase. Because of this strong relation, we'll use this technique in the smart bedroom. The respiration can easily be measured by your smartphone. You’ve to place your phone like this while you're sleeping:[2]

There are some footnotes. The first one is the calibration period which is needed. This seems quite logic, because not every person produces the same amount of decibels while he is breathing. But you have also take in mind that some people snore in their sleep. So because of these fluctuations between persons, you can't prevent a calibration period. This period is maximal five days. Another footnote is sleeping together. There isn't any scientific research done on this field. But there are already Apps[3] which claims that they can measure the sleeppahse of a single person when that person is sleeping together with another person. They give the following explanation:

Because they don't have a hard proof for this assertion, we'll explore this by ourself. We will do this as follow: Two persons are sleeping together, and both persons will use an existing App which will measure the sleep cycles. Both persons will also wear a bracelet which measures and stores the heartbeat.