Influence of temperature during your sleep

Article: The exact temperature you should sleep at to get a good night’s sleep

My girlfriend and I share a bed, but our sleeping preferences could not be more different. I like a few, thin sheets, and she likes ten heavy blankets piled on top of one another. She likes a bit of light in the room, and I like it pitch black. She likes the room to be as hot as possible while I like the room to be slightly cool.

Among those variables, the room temperature sticks out the most to me, because it has affected our sleep so much. That motived me to do some research to ask: what’s the exact temperature we should set the thermostat to in order to get a good night’s sleep?

Unfortunately, unlike there is with your office thermostat, there are no definitive answers out there. But over the last couple of weeks I’ve dug deep into the topic, and here are a few suggestions I uncovered for setting your thermostat to get a good night’s sleep:

For the last couple of months, I’ve been diving deep into experimenting with my sleep. I promise I’ll share more lessons learned as the weeks roll on!

Article: Effects of thermal environment on sleep and circadian rhythm

By Kazue Okamoto-Mizuno and Koh Mizuno

Disrupted sleep patterns do not only have effect on daytime activities. Also several other health issues can be affected by a bad nights rest. Things as for example obesity or mortality. Sleep and thermoregulation Many previous studies in humans indicate that sleep is strongly linked to thermoregulation Humans have a sleep-wake rhythm that is repeated in a 24-hour cycle. The core body temperature, which also cycles along with the sleep-wake rhythm, decreases during the nocturnal sleep phase and increases during the wake phase repeatedly in one night. Sleep is most likely to occur when Core temperature decreases, while it hardly occurs during the increasing phases. At the normal sleep onset period in humans, Core temperature decreases due to an underlying circadian rhythm. The driving force behind this Core temperature decrease is the peripheral skin temperature, which is rich in arteriovenous anastomoses and plays a central role in thermoregulation by adjusting blood flow to the skin. The Core temperature decrease in the sleep onset period is also strongly associated with cardiac autonomic activity. It has been suggested that changes in the cardiac autonomic nervous system precede sleep onset, which is strongly associated with changes in body temperature.

Effects of heat exposure Increases in wakefulness are greater in cold Ta (surroundings temperature) than in heat, suggesting that the impact of cold exposure is greater than that of heat exposure. Ta higher or lower than the thermal neutral temperature (29°C) have been shown to increase wakefulness and decrease REM in semi-nude subjects. However, these results are based on semi-nude subjects and exclude the effects of bed covers and clothing. In real-life situations where bed covers and clothing are used, sleep is actually disturbed during heat exposure rather than cold exposure in the young, as well as in the elderly. The increased wakefulness and decreased REM are stereotypical effects that are observed in heat exposure. Wakefulness is the only stage that can cope with an increased thermal load and that wakefulness replaces REM to maintain homoeothermic state. Heat load suppresses the decrease in Core temperature and increases Skin temperature and whole body sweat loss during sleep.

One of the most important factors that increase heat stress during sleep is the humidity. Humid heat exposure further increases wakefulness and decreases REM, and excessively suppresses the decrease in core temperature, whereas Skin temperature and whole body sweat loss are not affected. Decreased ambient humidity allows sweat to evaporate, thereby dissipating the heat, whereas increased humidity does not allow the sweat to evaporate, causing the skin to remain wet. This is an important fact for understanding what effect the humidity has on the core temperature. Test results indicate that if air conditioning use is limited, then it should be used during the initial segment of sleep. Furthermore, when air conditioning is used in the later segment of sleep, drying off the sweat and changing clothing are essential to avoid chilling effects.

Sleep in older men is more affected by heat exposure than in younger men. This result indicates that the Ta during sleep warrants particularly careful consideration in older men, especially since decreased sleep duration in the older men is related to reduced quality of life and mortality. Ta for the elderly should also take into account clothing conditions. The difference between cold exposure and heat exposure is that cold exposure mainly affects the later segment of sleep, where REM is dominant. In semi-nude sub- jects, cold exposure mainly affects REM due to suppression of the thermoregulatory response. SWS is not affected because it predominates in the initial segment of sleep. In thermoregulation during sleep, Core temperature decreases through the night as the Ta decrease. However, in real-life situations people generally use clothing and bed covers during sleep in cold exposure. In studies using clothing and/or bedding, no significant difference was observed in sleep in a Ta range of 13°C to 23°C and 3°C to 17°C. Also, no significant difference in sleep quality measured by actigraphy was observed between 9°C and 20°C in the elderly. These results indicate that, in real-life situations, cold exposure does not affect sleep.

With regard to cardiac autonomic activity based on the HRV index, the ratio of the low frequency (LF) to high frequency (HF) band (LF/HF) significantly decreases during stage 2 and SWS, while the percentage of the LF component (LF/(LF + HF)) significantly decreases during SWS as the Ta decreases from 17°C to 3°C. In contrast, no significant effect is observed during REM or wakeful- ness. These results may indicate that cardiac parasympathetic activity predominates under cold exposure during stage 2 and SWS, although the results of the LF/HF and LF/(LF + HF) should be interpreted with caution. The dominant parasympathetic activity during stage 2 and SWS may be related to at least three factors: cold stimulation of the head since sufficient thermal insulation of the body is obtained from bedding and clothing; cold air inhalation; and whole body cooling. First, cold stimulation of the face, a unique reflex referred to as cold face test, increases the cardiac parasympathetic activity and the peripheral skin SSNA simultaneously and integrates the trigeminal brain stem reflex arc in wakeful subjects. Additionally, this reflex activates reflex centers located in the medullary region and induces bradycardia. Furthermore, the concomitant increase in the SSNA leads to vasoconstriction, an increase in blood pressure and a significant increase in the HF component. Second, inhalation of cold air may increase muscle sympathetic nervous activity and blood pressure in wakeful subjects. Third, whole body cooling may also be related to increases in systolic and diastolic blood pressure and decreases in heart rate in wakeful subjects. Considering that approximately 70% of sleep time comprises stage 2 and SWS, the cardiac parasympathetic activity may be dominant during sleep in cold exposure. Conclusions Heat exposure affects SWS and REM, whereas cold exposure does not affect sleep stages. Considering that a Ta of 32°C with 80% relative humidity affects only SWS without affecting REM, heat affects SWS first, whereas REM may be well-preserved in real-life situations. Sleep disturbance during heat exposure may lead to behavioral thermoregulation in humans, for example, using an air conditioner to decrease Ta. However, during cold exposure, the cardiac autonomic response may be affected without affecting sleep stages and subjective sensations, and so not trigger behavioral thermoregulation to control Ta. This indicates that the impact of cold exposure may be greater than that of heat; thus, further studies are warranted to consider the effect of cold exposure on sleep and other physiological parameters. 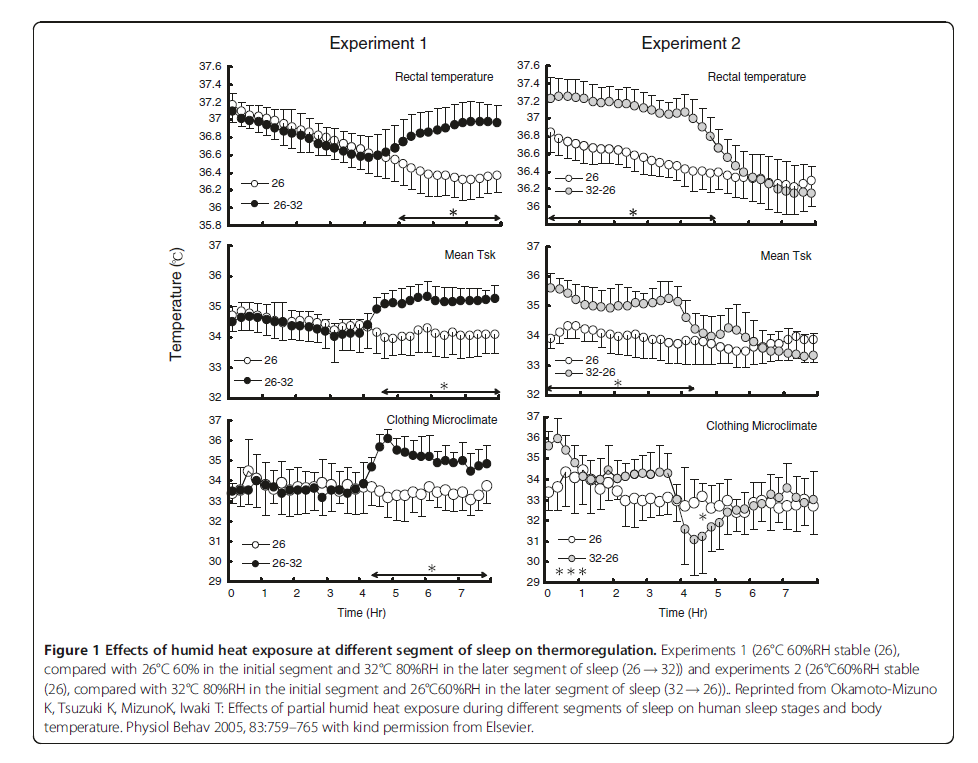