WARNING Before you start doing anything on the Hexapod, know that this page is old and the ideas used in the work of which this page is the documentation are not all modern/correct. Before starting to hack into the existing software, choose whether you want to use Orocos or rather Simulink for the control software architecture. If you do use Orocos, as done before, be aware that it is better to use a different architecture (minimize the number of components to minimize communication, so don't separate filter blocks etc.). Also, the Ubuntu and ROS versions referred to in this page are completely outdated.

The installation assumes that Ubuntu 12.04 LTS is installed. If not you should install an Ubuntu version. Notice that the version of Ubuntu determines line 3 in the following code i.e. precise.

It is possible to put the code in a shell-file and run it.

The code can be found on: http://hexapod.wtb.tue.nl/svn/hexapod/.

To obtain an account you should contact Patrick van Brakel. To keep the svn clean i.e. no build, bin or lib files do the following:

Uncomment, by removing the '#' and add

The TU/e hexapod is a six legged robot with compliant joints. The compliance is obtained by using torsional springs between the actuators and the joints; for the last two segments additional steel cables are wrapped around pulleys for remote actuation. The motors as well as the joints have absolute encoders. From the difference between these readings, the torsion in the springs can be calculated.

There are three main PCBs on the robot. The PCB inside the bottom of the robot (data acquisition module or DAM1) communicates with a computer. This can be the on board computer or an external pc. It is also equipped with an IMU that can measure pitch and roll angles, roll rates about three axes and acceleration along three axes. Furthermore, it receives power directly from the battery or external power supply and feeds it to the other boards.

The PCB on top of the robot (DAM 2) translates the signals it receives from a controller to electric currents for the actuators. The middle PCB is the on board computer on which it is possible to run the robot's software.

To power the hardware, there is a 24V connection on the bottom of the robot. There is a possibility to connect one of the LiPo battery packs or alternatively to wire the robot to a laboratory power supply. When connecting a power supply, make sure the current is not limited too much (you need more than 3A, 10A should be enough. Alternatively, wiring a capacitor in parallel is an option). Once this is connected, the DAM 1 can be started using the small red button that is connected to two loose wires and after that, pressing the large white button on top starts DAM 2.

Connection to a computer, either the on board one or an off board pc, can be established using the "In" port on the piggyback EtherCAT board on the DAM 2. The "out" port should be connected to the "Out" port on DAM 1.

For simulation purposes, the Gazebo simulator has been adopted in the very first hexapod development because of its integration with ROS. In a short time, Gazebo has changed and has become a stand-alone software. The early version of the robot model is not compatible with both ROS Fuerte and Gazebo. A complete re-writing of the interface code is needed. However, a porting from the old version to the new one has been attempted. To get started a few basic steps are presented below.

To start, proceed with the installation following the instructions here. Choose the latest stable release.

It's important to specify the robot model in the SDF format. The *.urdf.xacro format is no longer supported. To convert such a file, a script is available in the repository. Once you have defined the correct filename of the model to be converted, type

The folder tree has this structure:

Gazebo plugins are lines of code compiled as a shared library and inserted into the simulation. The plugins have direct access to all the functionality of Gazebo through the standard C++ classes. They are used to load models, control the robot, etc. From gazebosim.org:

Each plugin type is managed by a different component of Gazebo. For example, a Model plugin is attached to and controls a specific model in Gazebo. Similarly, a World plugin is attached to a world, and a Sensor plugin to a specific sensor. The System plugin is specified on the command line, and loads first during a Gazebo startup. This plugin gives the user control over the startup process.

Write your plugin_name.cpp in the hexapod_model/model_name/plugins folder. Then edit the CMakeLists.txt so that it looks like this:

As a next step, go in the plugins/build folder and build the library.

It's important to define the models and the plugins that you want to load in your hexapod.world file. Here's its generic model:

It's important to set the GAZEBO_PLUGIN_PATH correctly, pointing to the shared libraries. To do so, edit your .bashrc file:

The hexapod_model folder contains the models, each one with its model_name folder.

It's important to set the GAZEBO_MODEL_PATH correctly, pointing to hexapod_model. To do so, edit your bashrc file adding this line:

Compatibility problems show up for the moment. The model implementation has no elastic transmission and no interface hardware-simulator.

Getting started with the robot

The 'hexapod_launch' package contains launch files, whose task is to call Orocos scripting language files (ops) contained in the hexapod_launch/deploy_files folder and start the ROS master. Some of the deploy scripts contain hard coded paths. Make sure to substitute them with your own. A shell file, rename.sh, was written to automatically do this, but be sure to change the path in this file to your own path. It is located in hexapod_launch. Another possible solution for the future is to seperate the scripts more clearly and call them in a launch file, in which ROS launch syntax can be used to avoid hard coding paths.

In order to control the robot, the robot model file must always run.

A series of components interfacing with sensors and actuators constitute the essential core of the robot. Real-time data flow has to be preserved at all time during communication. Measurement and safety components are included in this section, because they base their functionality on the three main interface components (actuator, encoder and IMU drivers) that communicate directly with the EtherCAT boards.

This component sends the control message to the actuators, that has the form of a current setpoint. The signal that is sent through the output port has the dimensions of a torque, being the current multiplied by the motor torque constant. In order for the signal to be sent, a command message has to be sent as well.

The encoder driver, as the name says, reads the encoders, transforming them into human readable angle values.

IMU data flows through this component, that outputs the pitch and roll estimates together with acceleration and gyro values.

For the actuators to work, the safety module has to send an authorization signal. The conditions for which a green light command message is sent are that the legs are not trying to move out of their workspace and that the last link is not damaging the steel cable of the thigh by bending the shank. Moreover, an operation can be called to check the actuators status. An error message is displayed in the following cases:

To manage the transitions between stance and flight phases, the ground contact detection is crucial. Because of the series elastic transmission, the difference between joint and actuator encoders readings is available. When the legs are touching the floor, a deflection in the compliant transmission occurs. By measuring the average difference for the hip encoders readings during stance and flight phase, it's possible to determine a deflection region corresponding to ground contact, and subsequently a threshold can be easily fixed in order to distinguish the two phases.

The vertical position measurement of the hexapod's body over time, a desired performance index for a hopping robot, is hard to estimate. In literature, body height of legged robots is generally computed by averaging the tips vertical positions of the legs, transformed to the world coordinate frame, when they are touching the floor.

These components are responsible for the legs reference trajectory definition. According to the desired motion, different kind of gaits exist.

The user can specify a preferred Cartesian objective for each leg tip, and subsequently a reference trajectory is generated.

A list of tunable properties allows to specify the following gait parameters and, as a consequence, the type of gait:

Hexapod forward and inverse kinematics are integrated using the Kinematics and Dynamics Library (KDL) of OROCOS. KDL is an application independent framework for modelling and computation of kinematic chains. It includes class libraries for geometrical entities, various kinematic chains, and their motion.

The feedforward block sums its signal to the controller output feeding the plant. The amplitude of 18 current signals can be singularly specified, and an operation that manages the current offset for the shank, in case of horizontal jump movement, is exposed for external program or state machine callers.

One of the main goals of the design of the TU/e Hexapod robot is for it to be able to run and/or jump. To achieve this, the idea is that the resonance frequency is utilized. The approach that is used, is the one proposed in [1]. The authors of this article use 9 steps to generate a joint reference for a jumping robot. This method is adapted to work on a hexapod and applied here.

The first step in this approach is to determine the resonance frequency of the standing robot. In our case, this is done by making the robot stand up (up to position_3) and giving it a sudden push on the top, as a way of applying a delta function. As we are interested in the vertical displacement, and the IMU only gives accelerations, the vertical acceleration is measured. As a sinusoidal response is expected in the displacement, the second derivative should also be a sinusoid at the same frequency. This measurement is documented using a reporter component in OROCOS and the resulting data is imported into matlab to calculate the single sided amplitude spectrum.

The resulting amplitude spectrum is shown in the figure on the right. A clear peak is visible at 4.0 Hz, which is a reasonable value for the resonance frequency, looking at the robot in practice. 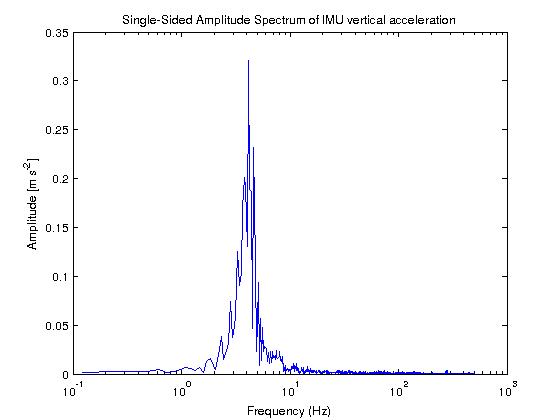 Single-sided amplitude spectrum of the Hexapod in vertical oscillation mode with 6 legs on the ground.

Make sure that you are connected to eth1 or otherwise change it in the *.ops file. To list the network ID's form your PC use the following command in the terminal:

Set the permission for the deployer-gnulinux such that it can use ethernet.

or HexapodSafety will not start, giving a similar error.

Log any hardware failure and/or breakdown here. After repair works, ALWAYS recalibrate the encoders! Look for hardware_calibration.ops in hexapod_launch.

Some interesting tips and tricks can be found on the wiki of AMIGO. Regarding realtime performance, also look at this page. For these links, an account for the AMIGO wiki is needed. This can be obtained with the AMIGO team.