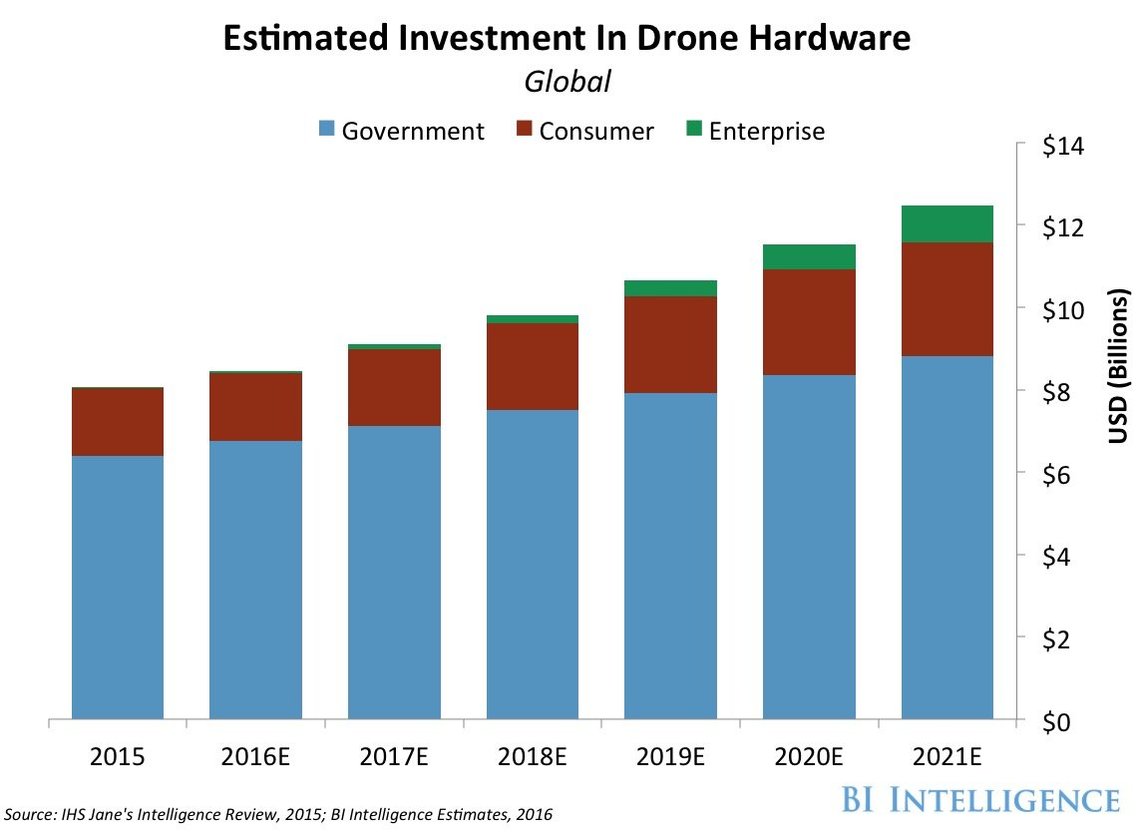 Figure 1: The estimated investment in drone hardware when considering the government, the consumer, and enterprise (U.S.A).

It is essential to consider the future when it comes to anti-drone measures around airports in this ever-changing world. The investment in drone hardware is expected to rise even more as can be seen in Figure 1. This does include not only the investment in military drones but also commercial Drones. Now that the technology is growing exponentially, it is hard to say what the future of drones will look like.

Altair Aerial creates easy-to-fly drones in the hopes of getting more people into the market with low-cost beginner-friendly UAV technology. Another company, EHANG, wants to turn drones into a taxi service. They have built a quadcopter capable of carrying passengers. It is clear that the technology when it comes to drones will keep increasing exponentially until we hit a certain point, where it is still unknown when this certain point will be hit. The only thing that is, however, clear, is that the non-existing to little countermeasures that exist around airports against drones is not sufficient for the current situation nor will it be for the future if we do not take a critical look at the underlying issue and tackle it.

When we consider the laws regarding drones usage in The Netherlands, we observe that we can start considering it from an EU perspective as new laws and regulations are being made. We argue that it is a good thing that these laws are made on higher levels rather than on the level of individual countries as we think there should be some standard when it comes to drones. We think this as the drones pose the same kind of risk when it comes to their usage around airports. The country this happens it does matter little when we consider it from a more general perspective.

When it comes to the decision model we used, we think that there are still many unexplored areas. Primarily as the decision model used (VAA) is still relatively new. We think it is possible also to consider other types of decision models. We could argue that using different decision models becomes more complex as then, in general, one proposed solution is the final result. It is extremely tough to differentiate between all possible solutions based on their attributes adequately. Thus, a ranking is more straightforward and, in our opinion, also more useful.

Many of the current solutions against unwanted UAVs rely on jamming their radio signal. The radio signal is used by a human to control the UAV from a distance. This means that hijacking the radio signal results in taking over the control of the UAV. However, what if the UAV does not use radio signals? Then many of the solutions are rendered useless, and the UAV can fly without any interference from the perspective of the airport. In the near future, we expect that the ability for UAVs to fly without human control will rise. This can be for example by preprogramming a path of the UAV. Another example comes with the rise of Artificial Intelligence: drones flying autonomously. With the use of sensors, a drone could be able to fly all by itself. In this case, again, radio signals are unnecessary, and thus all solutions that exploit the UAV's use of radio signals will be useless. In fact, there are already multiple drones on the market that utilise autonomous flying[1]. This is a shift that we expect to happen in the near future and can be abused by people with malicious intentions.

Other groups from the Robots Everywhere course

We thought it would be interesting to consider the work of previous groups and current groups when it comes to drone interception. Unfortunately, we were only able to find a single group that tackled this issue. The group found is group 9 of the current semester and year (PRE2018 3).

The overall goal of the project proposed by group 9 is to deliver a prototype and model on how an interceptive drone can be implemented. They started by researching their chosen project. This was followed by them analysing the USE aspects and determining the requirements of their system. Then, they considered multiple design strategy and chose the hardware and created a UML diagram. This was followed by working on a prototype (3D model and mobile application). Then, they evaluated the prototype.

Group 9 decided to design a drone that could take down other drones. They look at how to detect the intruder, how to target it, and how to assure that it has been captured. Furthermore, they provide a dashboard app, which displays the real-time system info and provides critical controls.

The first thing we notice based on the project proposed by group 9 is that there are no precise requirements as to what their solution should offer. It is mentioned that drones should be neutralised, but it is not mentioned if this should be done in a way such that no damage can be done to third parties or anything related. Furthermore, the dashboard app (only offered in a mobile form as of writing this (5th of March, 2019)) makes it possible to send key commands to the drone fleet. This raises some alarms from our side when we consider this drone actually being used in real life as jamming or hijacking the communication between the drone and the app does not prove to be the most difficult task. They argue that their application will also communicate with the interceptor drone (or drones if multiple are deployed) in real time, thus making the whole operation of intercepting and catching an intruder drone much faster. While the idea of amazing, we think this is exceptionally insecure as no security measures have been proposed by the group. We are afraid that the communication between the app and the fleet of drones can be easily taken down, or in the worst case, be hijacked and used for malicious purposes.

Back to root page.