A simulator is developed to easily test new algorithms without depending on the actual robot. In has been developed using gazebo (w/o the use of ROS), a so-called physics abstraction layer, which employs ODE combined with OGRE for rendering. Gazebo has been very well maintained since 2012, since it became the official simulator for the DARPA Robotics Challenge. The environment/robots are described in the SDF format, which is very simular to *.xml. It can be easily combined with CAD-files, in this case is combined with a Collada [1] drawing for more complex geometry. A previous attempt was created using MORSE, however this was aborted because the poor tune-ability of the physics and limited options for communication.

A guide on how to build gazebo can be found here, the latest version that has been tested is 1.8.3 and can be found on the svn. Make sure to source the setup.sh located on the svn, instead of the one that comes with gazebo. 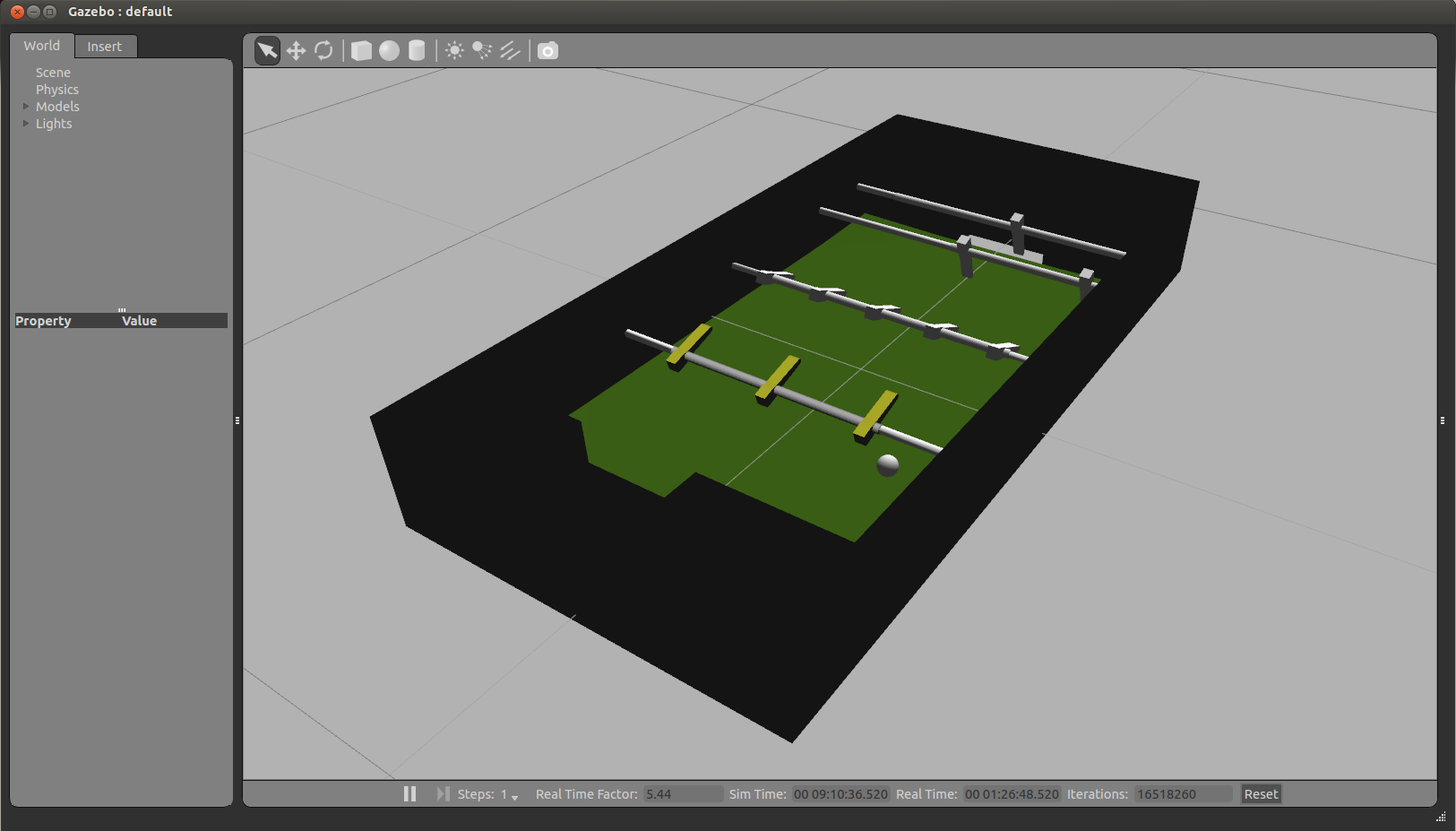 The gazebo simulator for the semi-automated soccertable.

To date, Gazebo is mostly used in combination with ROS. However using ROS plugins yields a lot of overhead, moreover the timers and communication provided there or not accurate enough to ensure an accurate casual link. Therefore a plug-in was created enabling fast light-weight inter-process communication, allowing to run simulation to be ran up to 20 times faster than real-time without loss of causality.

This simulation communicates with Matlab Simulink using Interprocess Communication (IPC) wrapper library for the POSIX libraries, the wrapper makes the use of shared memory more accesible and easy to use. It uses shared memory protected by mutexes and condition variables enabling a thread-safe, synchronized, causal communication between two processes e.g. Gazebo and Simulink. This allows us to use the Gazebo simulator as a plant in our simulink control loop. Moreover this wrapper library could be used for (safe) IPC between two arbitrary processes. More on this library, it's basic principles and how it is used can be found here.

After building gazebo and its requirements, you can build all libraries used for RL/IPC. These can be build by running the src/shm_ipc/install.sh and /src/rl/install.sh.

The Simulink side of things can be found in MOTION_test.mdl, this is not an external, but is ran in simulink itself in the regular way. The main window is shown below, the simulator part is the the gazebo sub-system. The motion-generation contains the reinforcement learning, attractor dynamics and constraints for the actions. To start the simulation just press simulation->start. If you want to view what is going on, open a terminal and type gzclient to start the gazebo GUI. 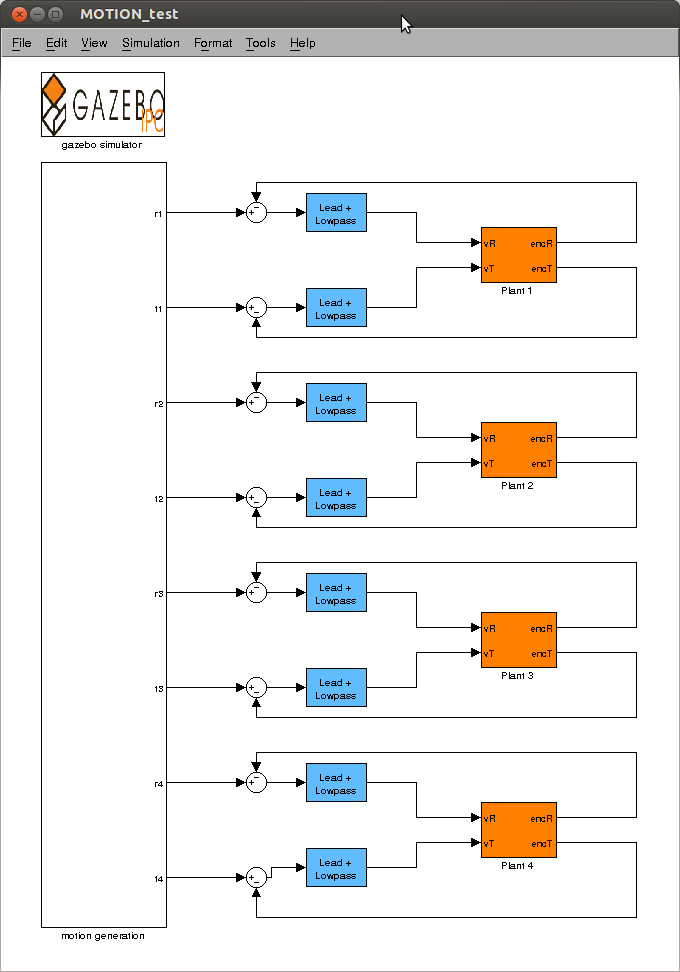 In the motion generation sub-system the ETA (estimated time of arrival) is indicated (how long the simulation will take in minutes). Also the current episode number is displayed. 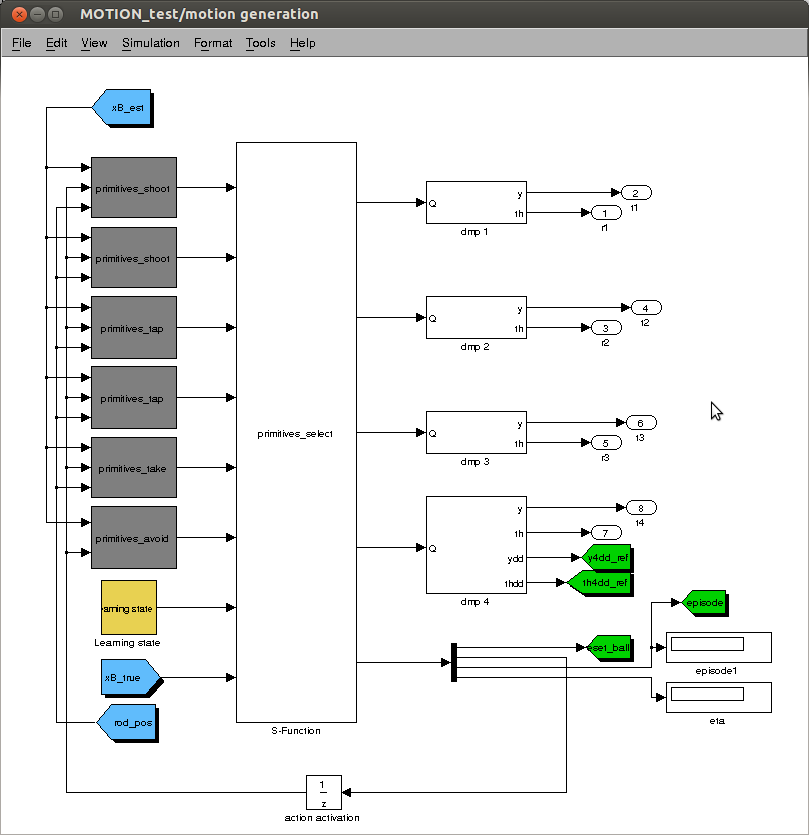 Most relevant settings regarding the actions and the reinforcement learning are set in their respective masks. In the mask of primitives_select.cpp you can set all the parameters described in this RL section.
In the tab named general the following settings are available: 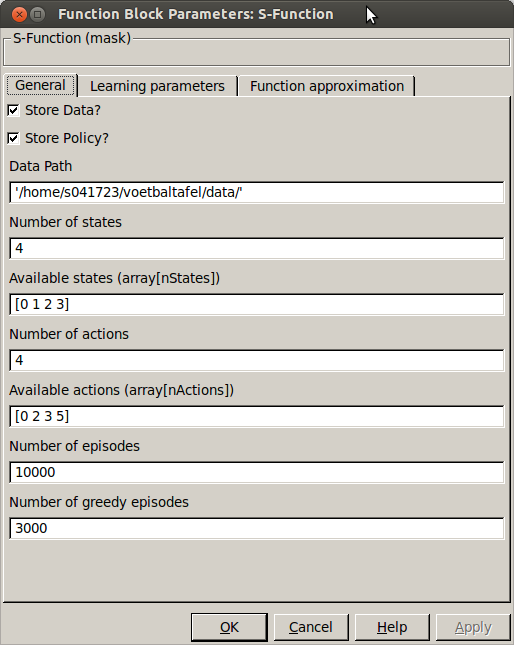 Store Data
Checkbox to enable the storage of data, this will store the buffers and the performance of the simulation you run.
Store Policy
Checkbox to enable storage of the policy. This will store the learned weight vectors [math]\displaystyle{ \theta,~w }[/math], but also other settings such as the node positions (centers), number of states and actions etc.
Data Path
Path to the folder in which all data will be stored. A new folder with a timestamped name will be created, also the name of the folder indicates what RL algorithm was used.
Number of states
Number of states used as input to the learning agent
Available states
Vector with indices of the states, the allow quick changes you can select a couple of seperate states from the input of the simulink block. I.e. we only want the lateral position and speed of the ball. We can then say: Number of states = 2, available states [1 3] indicating index 1 and 3 in the learning state. Make sure to adjust the function approximation accordingly.
Number of actions
number of actions available to the learning agent
Available actions
Similar to available states, vector with indexes of the actions you want available (0-5).
Number of samples
Total of episodes that are done in this simulation until it is stopped. (Make sure the simulation runs long enough in order to finish all of them).
Number of greedy samples
Number of episodes in which fully greedy behavior is performed ([math]\displaystyle{ \epsilon=0 }[/math]). If this is the same as the number of samples, then only greedy behavior will be performed. 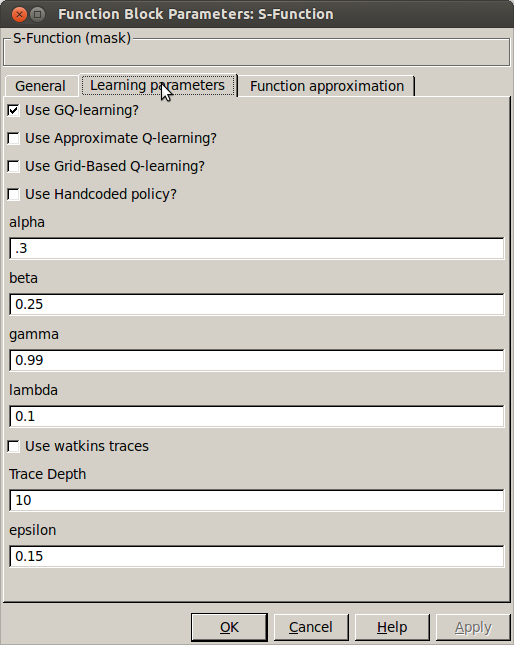 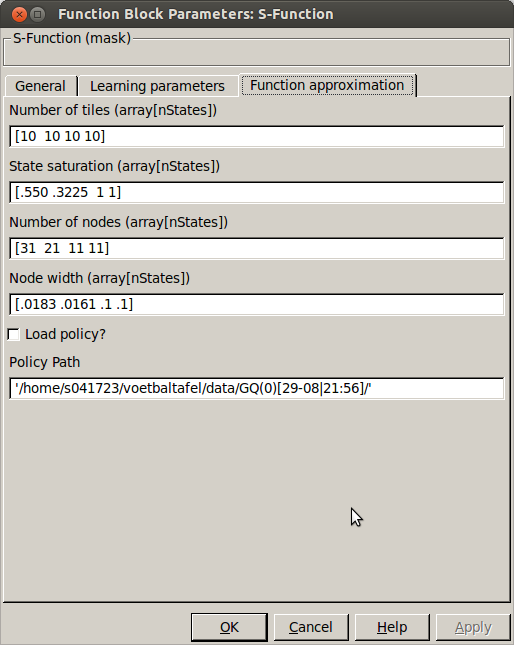 These settings are parallel to what is explained here. Make sure the size of these arrays matches the number of states defined in the general tab. The settings that are not explained here are: