This page discusses the work done on the Verax system in cooperation with Rogier de Rijk, a former MSc. student at TU/e and Avular, a high-tech start-up focused on developing industrial aerial systems. Two students (Daan and Johan) cooperated with Rogier and Avular in the development of a new, vision based localization system. Firstly, the general idea behind the system will be discussed as well as the hardware components present in the realization. Secondly, the specific subproblem Daan and Johan worked on will be introduced and discussed with respect to the theoretical background needed to understand the current implementation. Thirdly, the multiple iterations of implementation in more efficient software will be described.

The Verax system is based on visual pose estimation using a number of infrared LEDs and a calibrated camera wide-lens fish-eye camera. The camera is equipped with a specific band-pass filter to filter out all frequencies outside the infrared band of the LEDs. Then, the resulting blobs are associated with LEDs and the image coordinates of these LEDs are computed. These image coordinates can then be used to solve the perspective-n-point (PnP) problem, which is stated as follows: "Given n (n ≥ 3) 3D reference points in the object framework and their corresponding 2D projections, to determine the orientation and position of a fully calibrated perspective camera" [1]. Thus, given the known coordinates of the infrared LEDs in the world frame and given the image positions of these LEDs in a calibrated camera image, the orientation and position of the camera with respect to the world frame can be computed. Both the OPnP algorithm of [2] and the blob association are running on a NVIDIA Jetson TX1 Module, branded by NVIDIA as "the world's first supercomputer on a module"[3]. The performance of the Jetson TX1 with respect to visual computing applications makes it very suited for running these algorithm.

The OPnP minimizes the error of the projected image coordinates of the infrared LEDs with respect to the observed image coordinates for the camera orientation and position, i.e. how should one hold the camera such that the LEDs (of which the coordinates in the world frame are known) are projected onto the image exactly at the image coordinates at which they have been observed by the camera? The paper proposes a globally optimal, closed form solution to the unconstrained minimization problem by using a novel rotation parametrization and an automatically generated Gröbner basis solver [4] for solving the resulting multivariate polynomial system.

Since a regular implementation of the automatically generated Gröbner basis solver on either the GPU or CPU by making use of MATLAB's embedded C/GPU coder does not meet the performance requirements, the software has to be ported to a lower level language that makes use of GPU accelerated libraries to fully utilize the Jetsons hardware. Since Rogier lacked the expertise to port the code and did not have time to fully look into this, Daan and Johan were assigned the task of porting the MATLAB code and achieve an update rate of approximately 30 Hz.

The automatically generated OPnP algorithm (thus an implementation of the Gröbner basis solver) has two main function calls that limit its performance. These functions implement the following procedures:

Both elements take up 50% of the total computation time, so both routines are worth optimizing.

In general, there are three ways to approach this problem:

Since all eigenvectors are required for the OPnP algorithm, the most general approach to calculating all eigenvectors and eigenvalues of a matrix was chosen. Note: this is also the method implemented by LAPACK. Other methods like the power iteration or Rayleigh quotient iteration only return one specific eigenvector or eigenvalue, so these are not suited for our problem. The general approach consists of three stages, further detailed below.

Next, the upper Hessenberg matrix is reduced to an upper triangular form. This is done by the QR algorithm, which boils down to calculating the QR decomposition [math]\displaystyle{ A_k = Q_k R_k }[/math] and then reversing the order of Q and R to calculate [math]\displaystyle{ A_{k+1} = R_{k}Q_{k} }[/math]. After a certain amount of iterations (depending on the difference in magnitude of the neighbouring eigenvalues), the matrix will converge to an upper triangular matrix with on its main diagonal either a single eigenvalue or blocks of 2x2 submatrices containing two eigenvalues with similar magnitude, but possibly complex conjugated or negated sign. Like this, the eigenvalues can be computed by computing the eigenvalues of all 2x2 blocks of the reduced matrix. 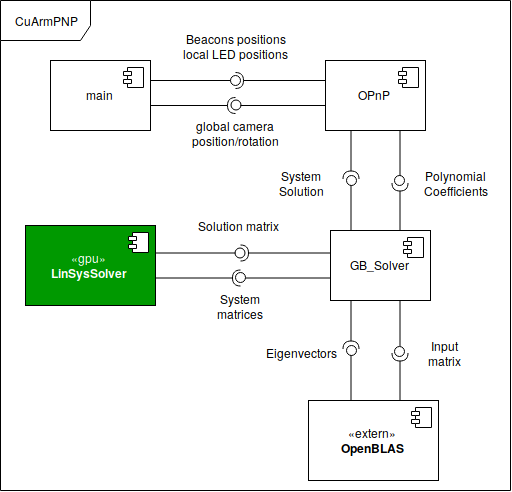 Component diagram of the current implementation

This section describes the different software approaches we tried to increase the performance of the algorithm on the Jetson in chronological order.