Every ground robot contains both an Arduino to control the actuators, and a Raspberry Pi for high level control and wireless communication. The code for these devices are in the omnibot-controller and ground-robot repositories respectively.

This is a fairly simple Arduino sketch that reads a target speed over the x and y axis as well as a target rotation speed, and controls the actuators to reach this speed. A Makefile is provided that reads the serial ID of the currently connected Arduino, and automatically sets up the pin configuration accordingly, as these are different for every ground robot.

The serial protocol is defined as follows:

Nota bene No headers or terminators are used, the user must guarantee that exactly 12 bytes are sent per message, or trailing bytes will mess up new messages.

The ground-robot repository contains, among others, scripts to remotely control the ground robot by sending commands over UDP, one to manual control the groub robot with the WASD keys, and another script to detect ground robots on the local network and setup all of them to allow remote control of the robots.

Running the remote_control.py script listens on a UDP socket at port 12000 for messages using the following protocol:

It then integrates them into speeds (only if flag == 1) and send the new target speed over serial to the omnibot-controller.

The need for a nice system to deploy code to the ground robots arose quickly as we started to use more ground robots simultaneously: they all had to run the same code that was frequently updated, but this was hard to maintain without proper tools. In practice there was usually one ground robot with up to date software, which was developed on the pi itself, and sometimes copy-pasted between two Putty windows to copy it to the next ground robot. A putty session had to be open for each ground robot to keep the remote control script running. Sometimes a powerbank would become disconnected during aggressive movements, resulting in the Raspberry Pi losing power and corrupting the SD-card. Flashing Arduino code was an even greater pain, as they had to be disconnected from the Pi, hooked up to a laptop and then flashed, one by one.

All the ground robots are now flashed with volatile write firmware. This means that all changes made to the filesystem are stored in volatile RAM instead of being written to disk, and so the ground robot will be reset to its initial state after every reboot. Because the SD-card is never written to, a power loss does not corrupt the SD-card. It also renders the bad practice of developing on the Pi itself impossible, as all files written will be gone after a reboot. Instead, development takes place on a laptop, and when the software is ready for testing it is deployed to all ground robot simultaneously.

A script was developed to make deployment to all ground robots easy. When run it executes the following sequence of commands:

The script is fully cross-platform, requiring only python3 and a few python libraries to work. 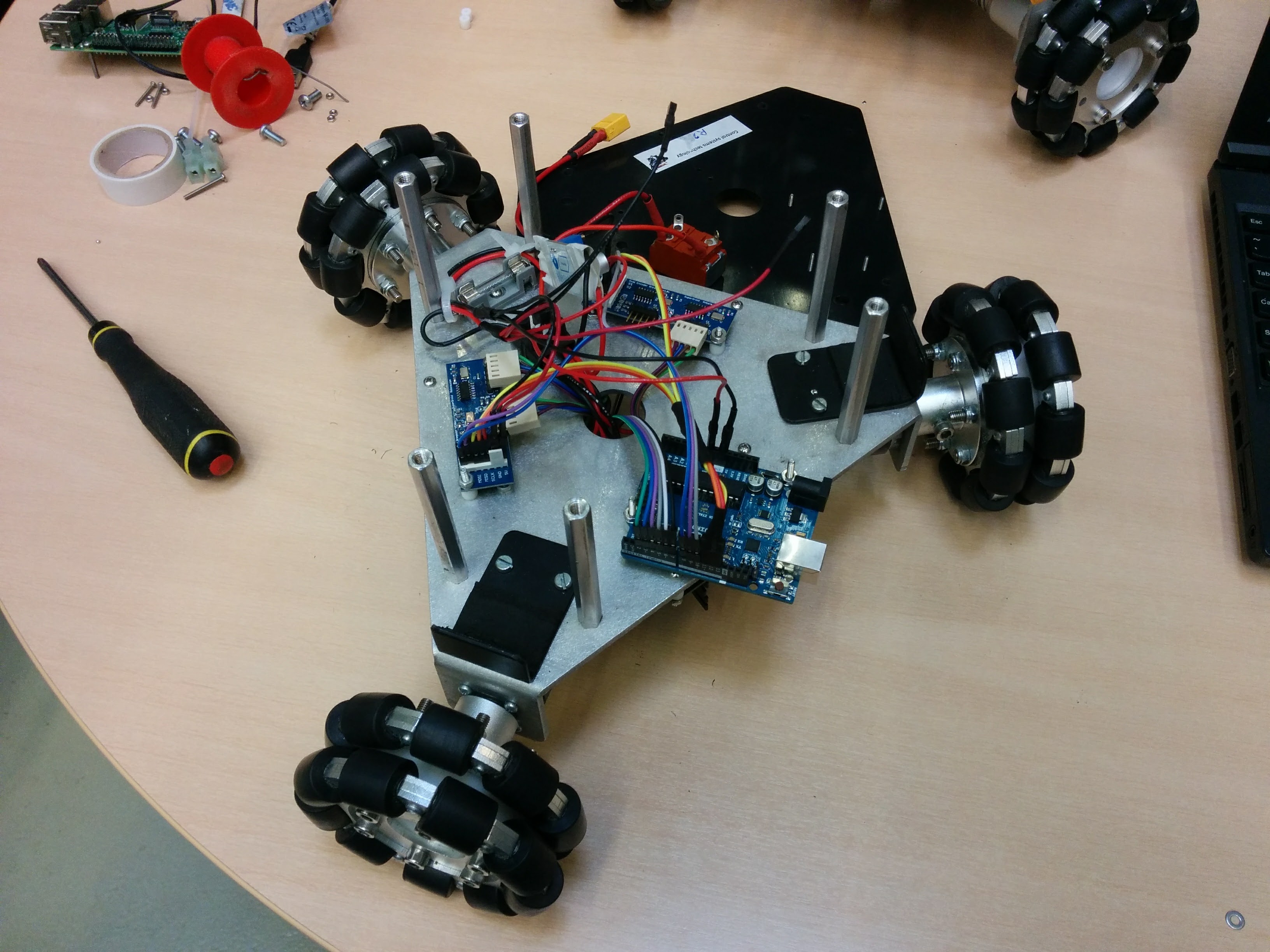 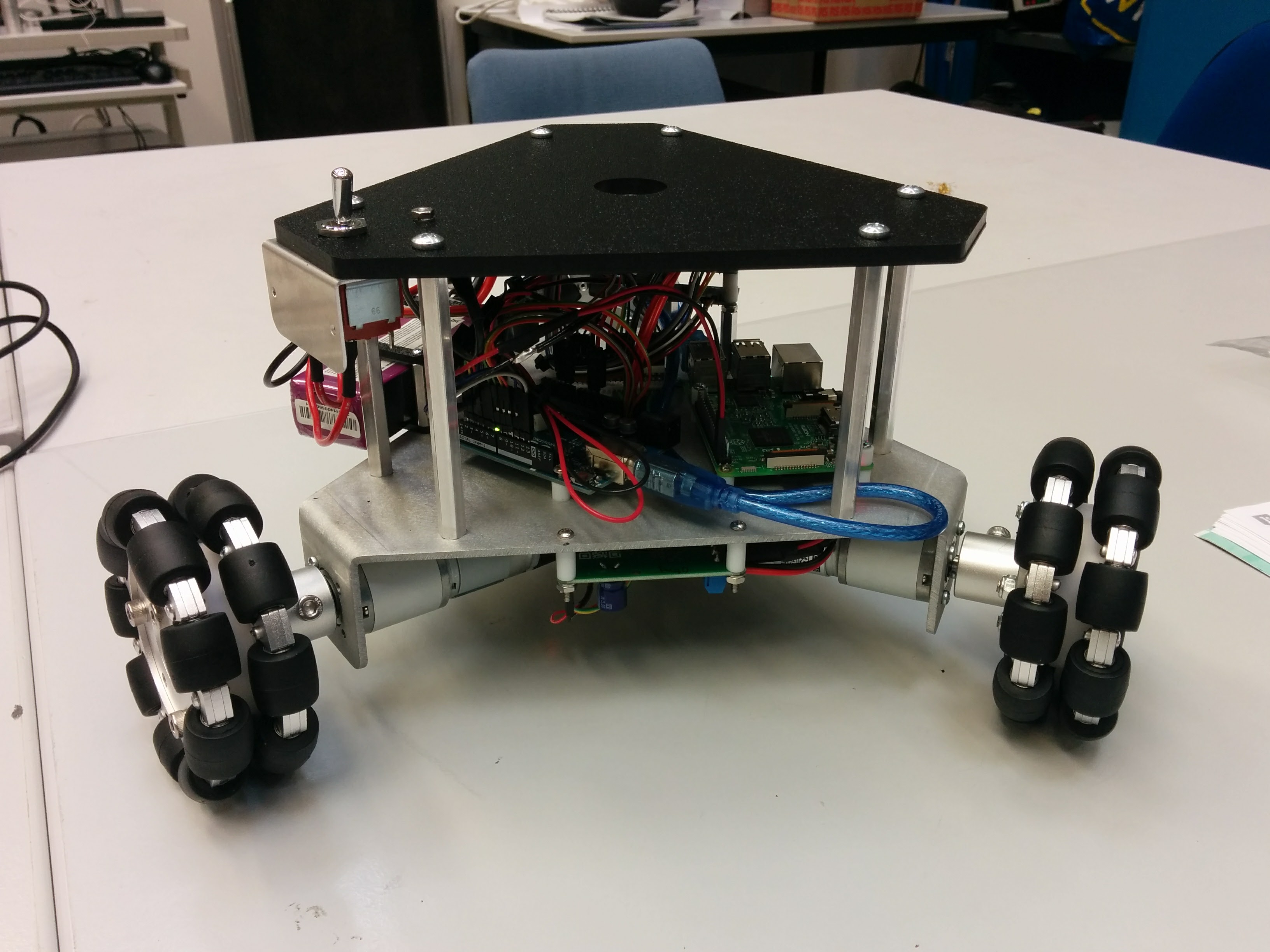 This document describes the build process of ground robot 1, 2 and 3. It mostly considers things that were changed with respect to the first two ground robots. Hardware as well as software changes will be discussed. Pinout tables are provided in case hardware changes or fixes are ever required.

Ground robot 1 and 2 were built around the same time and have identical parts. Their original wiring has been re-done because it was of rather poor quality and required regular fixes. Below is the pin specification for robot 1 and 2. Note that it is different from the pinout configuration of robot 3, since it use different motor drivers which requires an additional pin.

Several Arduino sketches were created which can be used to verify that all hardware subsystems work. These are included with this report. A summary of the available tests is provided below.

The build of robot 3 was completed on August 1, 2017. The following things are different with respect to robot 1 and 2:

Below is the (new) pin specification for robot 3.

As mentioned before, the pins on the new motor drivers do not match the old ones. The old motor drivers used a dir pin to control direction - pulling it LOW or setting it HIGH makes it rotate either clockwise or counterclockwise. The new driver uses two pins to reach the same goal:

Motor speed is controlled by setting the PWM values PWM1, PWM2 and PWM3. The chosen value should be between 0 and 255, 255 being top speed.

The encoders communicate to the Arduino device using an SPI communications bus. Each of the three encoder boards has its own SS (Slave Select) wire which is used to select the specific device. A device is selected when the corresponding SS pin is pulled LOW (while the others are HIGH).

The functions that are used in the robot Arduino software are the same as those provided by SuperDroidRobots, the boardΓÇÖs manufacturer. The important ones will be explained below:

Hardware verification sketches are also available for robot 3. They are very similar to the ones as provided for robot and 1 and 2, except for the fact that pinouts have changed and motors are controlled in a slightly different fashion. The sketches are named encoderTest3.ino, motorTest3.ino and speedTest3.ino. Refer to Section 2.3 for accurate descriptions of these sketches.