For this assignment, we are expected to develop and implement a software code so that Pico can autonomously solve a maze. The assignment consists of the following challenges:

Based on the requirements mentioned above, certain functionalities of the robot at task were detected. Based on levels of complexity these can be divided into 3 main groups:

These tasks directly lead to the realization of the goal, they are considerably complex and use various combination of skills for their accomplishment.

This is the highest level of logic, decision algorithms which enable the autonomous system to negotiate the maze in the shortest time possible. Critical decisions like recognizing dead-ends and intersections and the optimum turning direction fall in this category. This involved various skill selection at different stages of the maze.

position with respect to a Global Coordinate System (planer). This will be beneficial in avoiding movement in closed loop trajectories.

Skills are localized decision making event which enable realization of Tasks, they are of a lower complexity level and often involve computation in a specific situation.

The control of robots can be done by calling the functions in the emc library, which will communicate with ROS topics for data exchange. By running C++ programs, data can be obtained, processed and transmitted from and to certain topics.

The figure below shows the interface:

The design document can be downloaded here 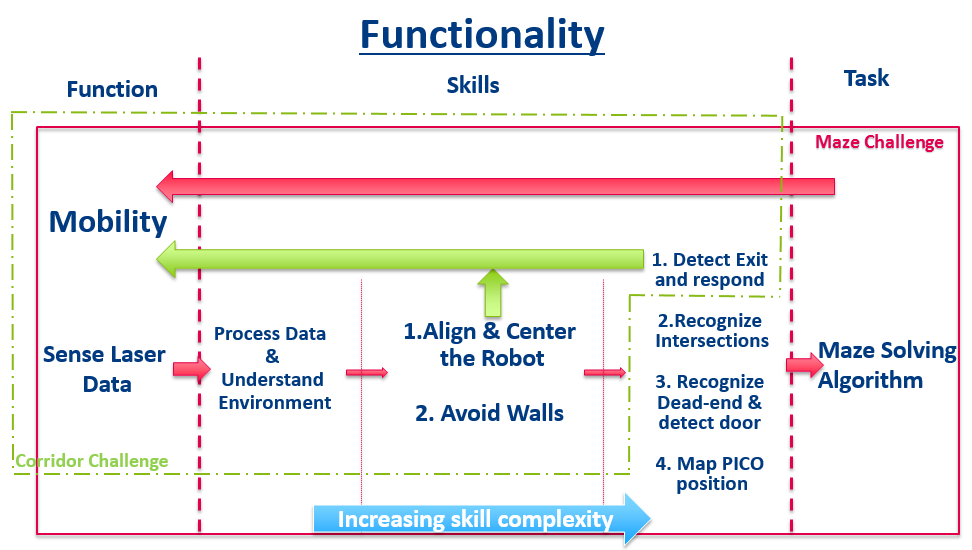 We realised that a detailed inspection and understanding of the robot functionalities was essential, this would enable us to design the software structure. On the most generic level, functionality was divided into Functions, Skills and Tasks as described in our Design Idea. Skills consisted of a tasks which were of wide complexity, we have further divided that into three different segments. 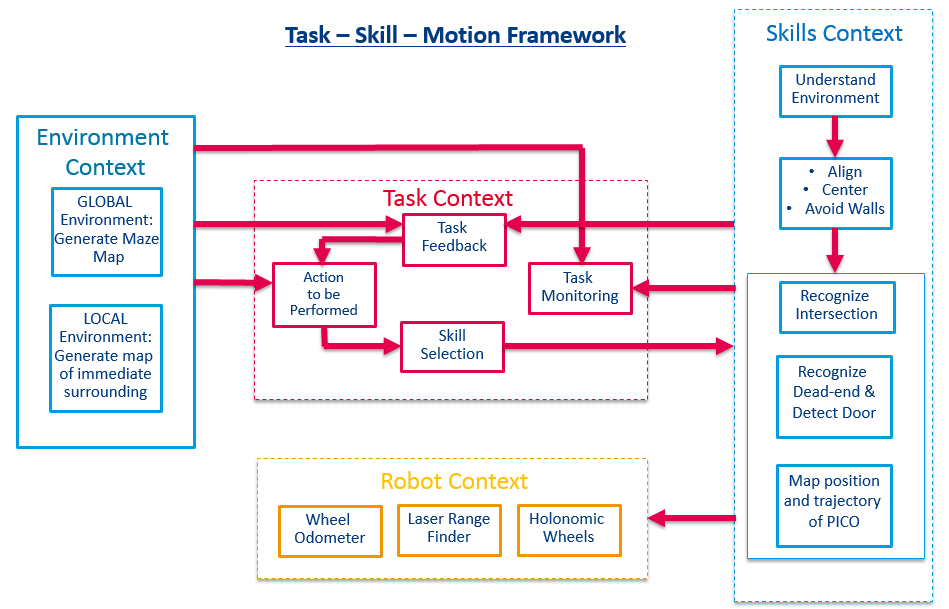 The software aims to evaluate the robot's surrounding and accordingly provide motion instruction and monitor the execution. In order to understand and implement this software, we have used a structured system architecture. The system is divided in to structure, behaviour and action. Behaviour is the system reaction to the environment, action is the implementation of what the algorithm instructs the robot to perform. Structure is the realisation between behaviour and action. The task-skill-motion diagram helps us explain the behaviour of the system.

The design presentation can be downloaded here

The corridor challenge requires the robot to travel through a corridor without any wall collision. It needs to detect an exit either on the right or the left and perform the exit operation. The team decided to break down the various tasks in to simple function blocks. The environment is being studied in the main while loop, based on the conditions the relevant function blocks would be activated. The LRF Data was used to inspect the surroundings in order to understand local position and orientation. Odometer data was used only to track small changes in the displacement of the robot. We understood that due to wheel-slip, odometer data would be unreliable for larger motion. In the corridor challenge, the map was divided into two parts. One was the corridor where the robot was expected to travel straight with out any collision. The other part included the junction of the corridor an the exit.

Some of the relevant function blocks and working principles have been discussed below.

The images below depict the detection of the corridor exit and the exit methodology used in the corridor challenge.

Our software wasn't able to complete the corridor challenge. We should have used classes instead of functions as it would make the software structure more robust and systematic. Some of the global variables were passing through multiple conditions and this caused contradicting information in certain situations. Also, we used odometry data but the odo meter was not reset before we started the experiment. We realised that using Potential Field for the Corridor Challenge would ensure a smoother manoeuvre with a much simpler logic. The simulation above is using Potential Field and confirms that Potential Field is a better methodology to use in a similar Challenge. 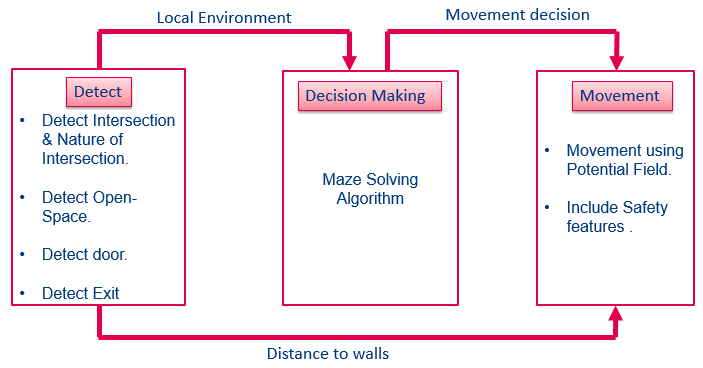 The Final Design included software to negotiate the maze for the Amazing challenge. The team identified the critical functions and decided to accordingly segment our software. The "Detection" block is responsible for processing and judging the nature of the environment. It passes on local environment data to the Decision Making Block. The "Decision Making" block is responsible for instructing PICO about its movement at intersections. The Decision Making block passes on its judgement to the "Movement Block" which uses virtual potential field function to negotiate PICO through the maze while avoiding collision with walls.

The Detection Function Block is responsible for processing the robot local environment data and relaying this information to the subsequent Decision Making Block and Movement Block. We use three primary laser data bundles to understand PICO's surroundings. Average Value Left 1 (AVL1), Average Value Right 1 (AVR1) and Average Value Straight 1 (AVS1). Based on the values of these laser data bundles, the environment is analysed. A separate flag is raised in each of the scenarios which is eventually passed on to the Decision Making block. There are five different scenarios which are detected namely :

The DECISION MAKING Block receives information flags about the nature of intersections from the DETECTION Block. It implements a very simple algorithm where PICO is instructed to turn Right and the instruction history is stored in an array. After every five Right turns, the instruction is changed to go Left the next 5 times. The variable Length History stores all the turn count while the variable Length History Mod stores the immediate turn decisions of the same type, it is reset after every 5 count. After a decision count of 20, Random Walk is implemented. This is to ensure that PICO doesn't travel in a loop.

The image below represents the decision making algorithm.

You may have a look at the Decision Making Function in the below available link .

The team decided to use a simple but effective implementation of the Artificial Potential Field method for obstacle avoidance. The movement of the robot was realised through one of the 3 primary blocks, the Movement Block.The Movement Block satisfied two primary functions, to avoid collision with walls and obstacles and to execute turns based on data from the Decision Making Block. There are 2 fundamental forces which decide the movement of the robot. The Attractive Force is calculated based on a fixed set point in-front of PICO. The Repulsive Force is calculated based on the laser data PICO generates.Repulsive Force is calculated along the direction of each of the laser range data, dependant on the distance of the obstacle or the wall from the robot. Each wall point or obstacle was given a repulsive force which was inversely proportional to the distance to the bot and along the direction of the Laser Range Data. An attractive force set point was put at a constant small distance in-front of PICO. The resultant force was calculated by summing all forces along the longitudinal and lateral direction. The resultant forces was then further extracted into horizontal and vertical directions in order to extract velocity for each direction.

The Movement Function has the following inputs:

Here Xg and Yg refer to the set-point coordinates while Xr and Yr refer to PICO coordinates. We want to make it clear that these values were constant at all points of time, it was implemented to provide PICO will a forward motion while the Repulsive Forces controlled the Lateral Motion.

Once the flag has been identified, PICO uses a Virtual Wall methodology to execute the turn. It is a simple logic which limits the laser range finder data d[i] used to calculate the repulsive force in the direction of that specific Range Finder. Taking the instance of a left turn at an intersection. PICO identifies the shortest distance in the range finder array range of 107(exact right of PICO) to 500(Straight Ahead). The value is stored, say at the variable N. In the Data used to calculate the repulsive force along each of the range finder directions, the d[i] values from i as 107 to N are restricted to a small constant value. In the image below the Virtual Wall Starting[i=500] and Closing Points[i=N] are illustrated. This imitates the presence of a wall in the direction opposite to the turn direction. The array values are restricted till PICO has negotiated the turn and a corridor has been detected.

Finally Generation of Movement Data. Lambda is the angle between the Resultant forces along the X and Y Axis. Translational velocities in the X and Y directions and rotational about the Z axis.

We think that our Artificial Potential Field Algorithm worked well as PICO didn't collide with walls or obstacles at any point of time. The Virtual Wall approach to turn negotiations worked well without any errors. We would like to present a code snippet of the Artificial Potential Field Function Block which was responsible for Collision Avoidance and Turn Negotiation.

The Team managed to bag the third position in the Corridor Challenge. Even though we were unable to detect the door and make it open, PICO managed to go about the enclosed area in a systematic manner without any collision. A few points w would like to highlight here which would have made a huge difference to our performance.

Here is a video of the Maze Challenge.

Here is a photo of the group with our mentor Wouter. You may notice that Parth has grown rather fond of PICO, wants to share his beer with it.