The main objective of the course is to design and implement an embedded motion system and apply it to an autonomous robot. At the end of the course, there is a maze challenge in which the robot has to find the way out as quickly as possible.

For implementing and testing the software design, a robot named PICO is used. There are mainly two inputs to the PICO robot. They are (1) odometry data which is received from the wheels and (2) laser data from the range finder. 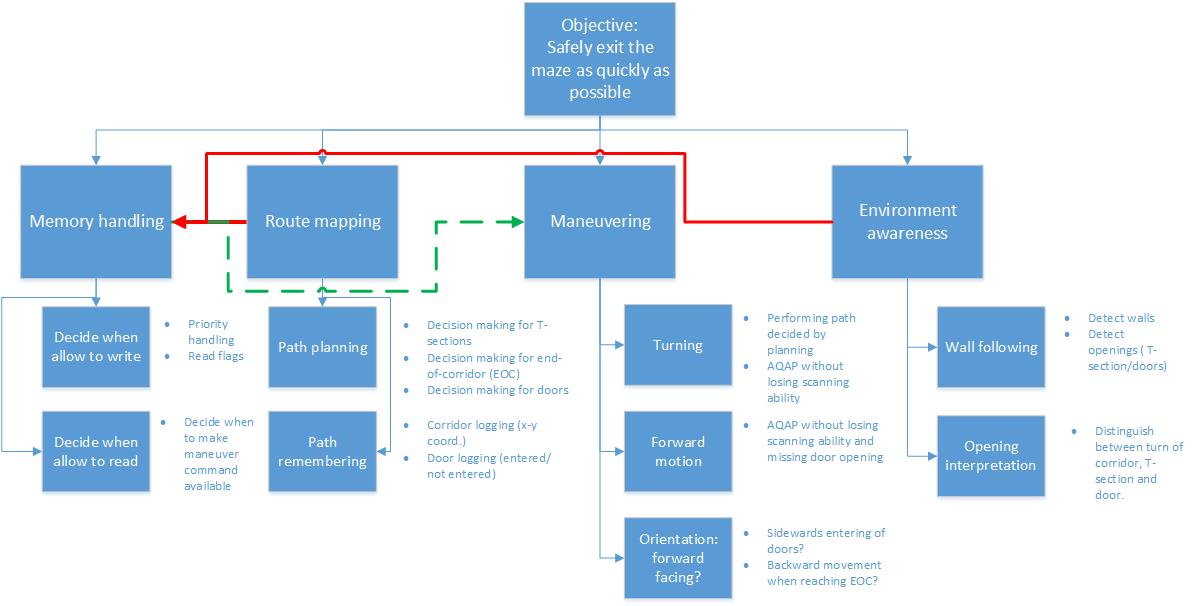 To reach the objective, the robot will have to fulfil a set of functions or tasks, for which it will need certain skill sets. In order to judge whether the found solution fulfils the functions, a set of requirements and necessary components are needed to meet the specifications. The functions and underlying skills can be portrayed in graphical overview resulting from brainstorming as shown in the above figure.

For each function, requirements can be set along with additional information about the required components and specifications. The resulting skill sets and robot lower layer abilities needed are derived from the combination of the functions and components. 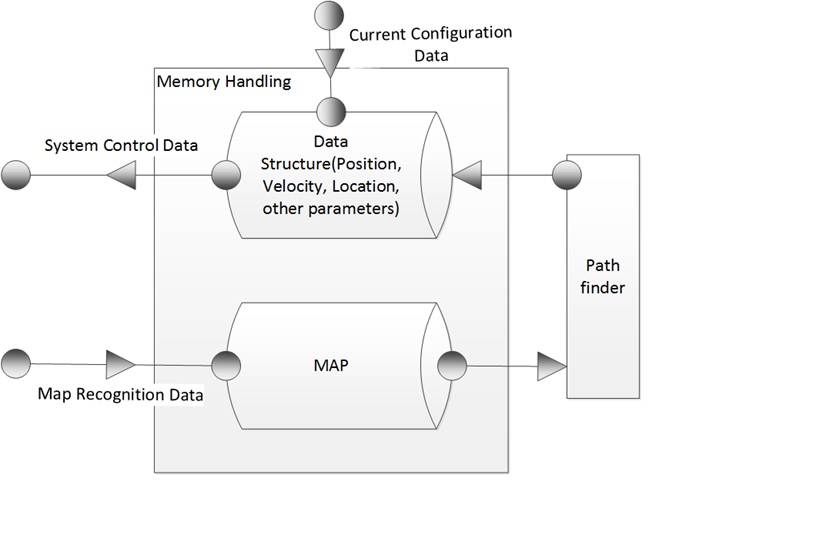 As seen in the figure above, this function is mainly involved in handling the on-board memory modules for all the computations and logical decisions required to be made by the robot.

The components required to perform this function effectively, are a read only code memory, and a RAM (Random Access Memory). 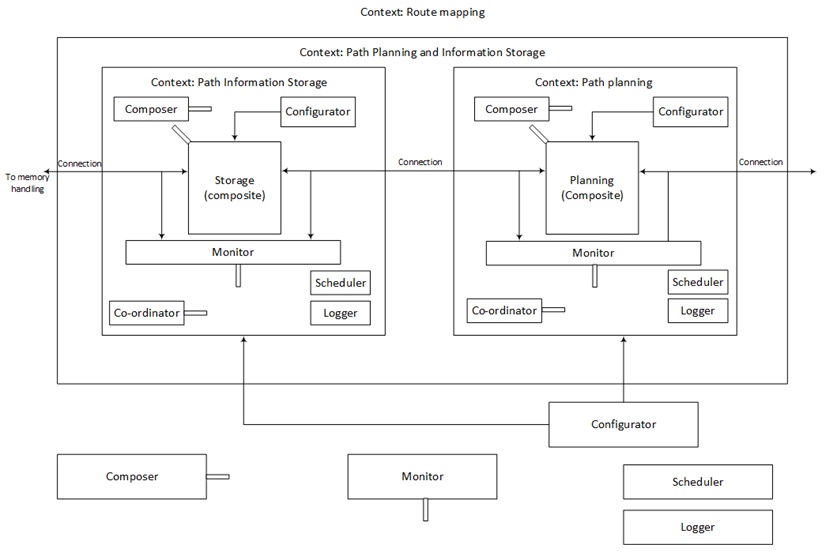 As an example of the approach used, the presented figure depicts the route mapping function as a nested CP which denotes how the functional entities can be designed with CP as the building block at various levels of hierarchy. The main function consists of two sub-functions which have a similar construction to one another. Each of the functional entities operates under its own context which helps in separating the 5C concerns. The ‘connections’ show the exchange of data which in this case is with the memory handling function which depicts the communication aspect with other functional entities.

The function route mapping has the following subcomponents: 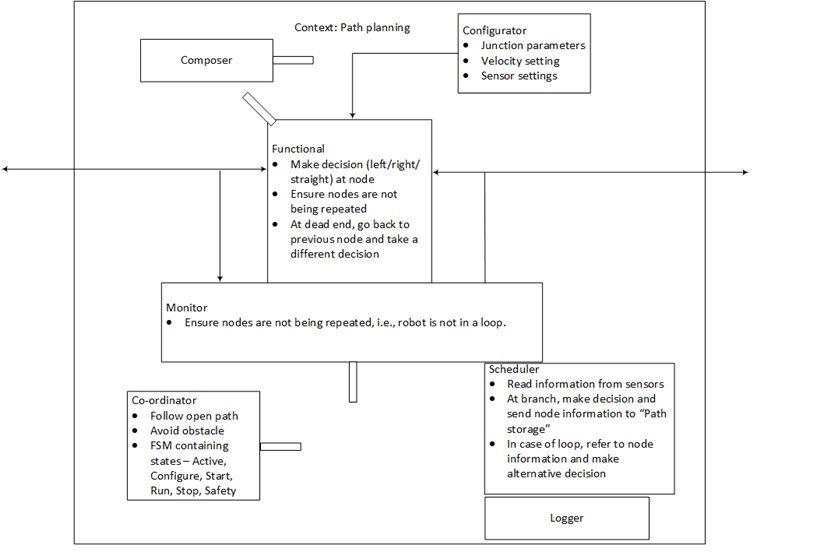 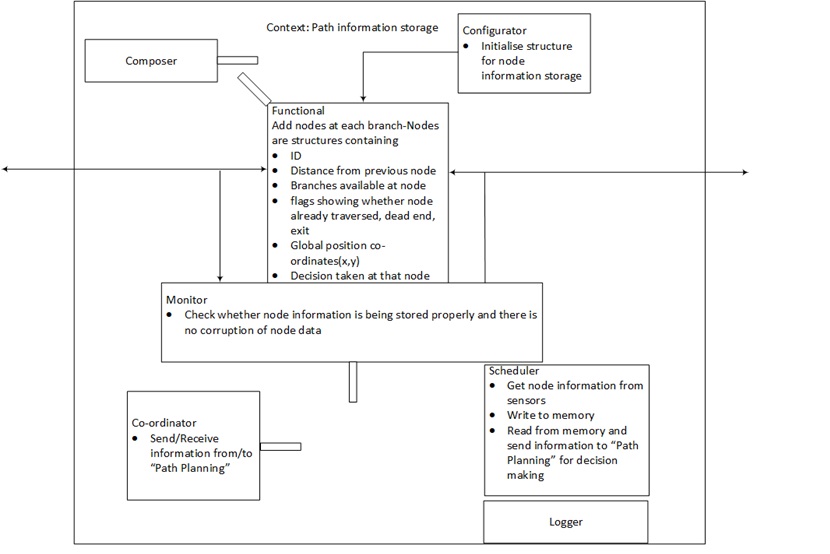 In order to successfully accomplish the above mentioned function, certain requirements (qualitative in nature for now), needs to be fulfilled. These are:

Route map is very important in the maze challenge because the robot should not go to the same junction or corridor which was taken before. So the route map or world map is made of nodes which is used to store the data relevant to the robot for completing the maze. There are some key components used while making the nodes. The nodes acts as a major communicating factor for communication with other function to base their decisions. An identifier was used for storing the information. Depending upon the operation of the robot (turns,exit,door detection), nodes were categorized. The most important task is positioning the robot in the global coordinate when dealing with loops and dead ends.This was also done using the laser positioning system.

The nodes were defined in the code as a separate class with organized structure to ensure ease of access to information. 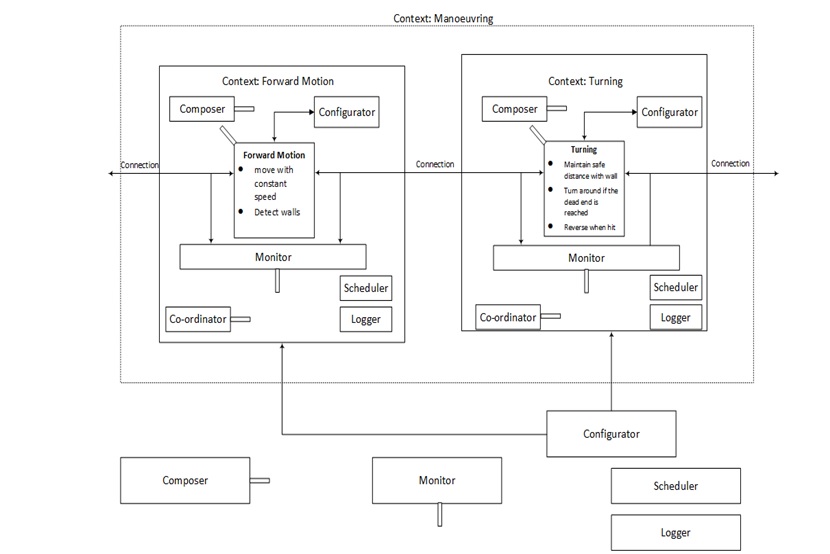 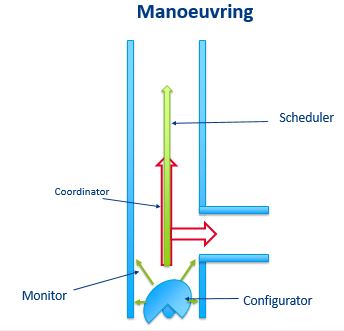 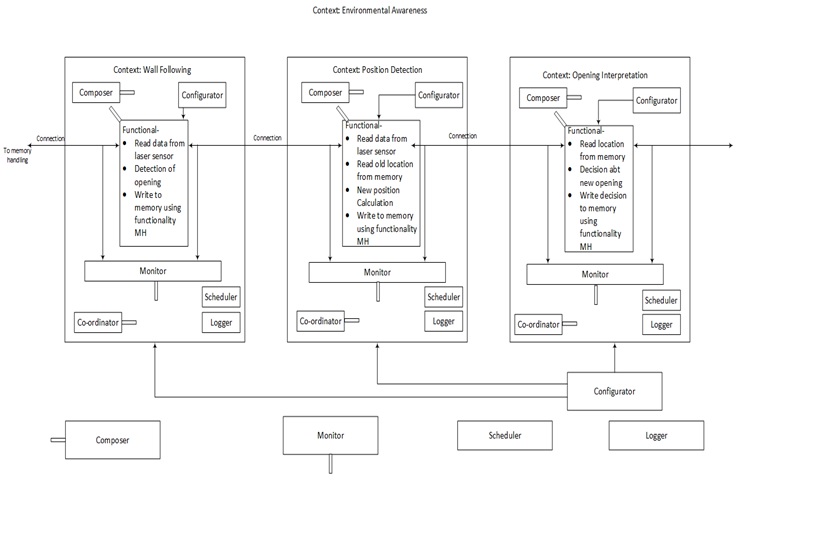 From the figure, it can be seen that the skills are listed in the composition pattern, further these skills in themselves are composition patterns. The skills consist of a set of computations that uses the input from the sensors and gives output regarding the environment ( obstacles, doors, position) to other functions that further process this information. Some skills are shared across the different functionality (e.g. reading data from the sensors and reading/writing of the memory). 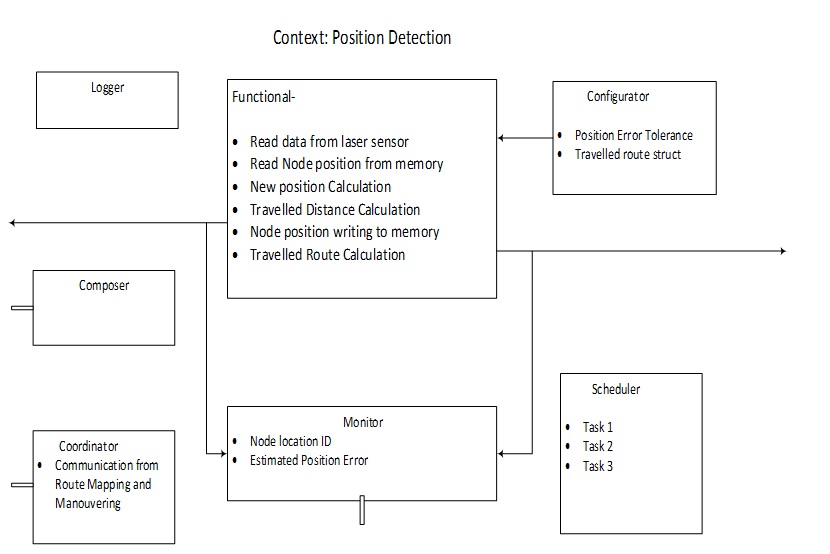 This function should fulfil a set of requirements in order to test if the function is performed correctly. Part of the requirements will be quantitative, however, due to the early stage in the project most requirements are kept qualitative for now.

Components that are used by this function are the memory and laser position sensor. 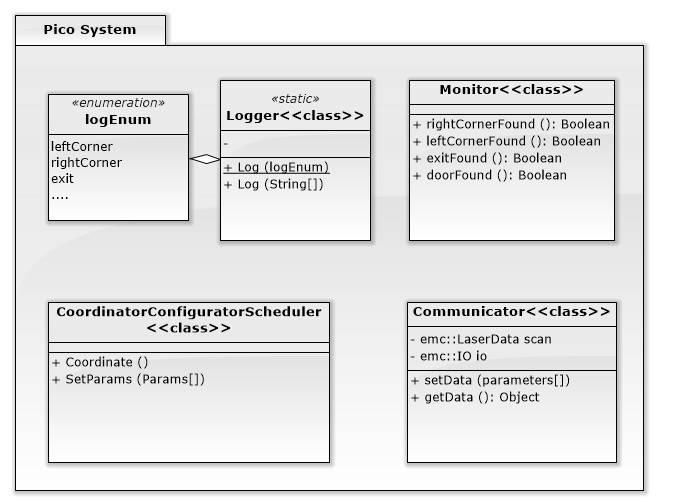 The system was designed in a structured way based on classes. The figure above shows the system architecture with which the entire coding is made. This was done to mainly satisfy-

As seen in the video, PICO completed the corridor challenge very smoothly although it was a bit slow. This was because we were short of time for testing our software at higher speeds. The robot remained almost at the exact centre of the corridor throughout the challenge and this was because of the nicely tuned PI controller that was implemented. This meant that our motion task was indeed running satisfactorily.

The PICO is tested for a designed maze prepared by the team.The video below shows the working of PICO in the maze. Video link - http://youtu.be/-LjT004KEN0

Here the PICO is tested for the door detection as it is the major task or objective to complete the maze.

Turn around (If no door is detected)
For the Maze challenge, PICO is supposed to detect door which would be located in a dead end. So, the software was designed in such a way that, when the PICO detects a dead end, it sends a signal for the door detection (which could be heard as calling bell sound in the video) and waits for 10 seconds. If the door doesn't open, PICO turns around and performs other functions. Video link - http://youtu.be/NASDGkWwzRA

Perform actions (If door is detected)
PICO does the following function when the door is detected. The door detection can be seen in the video as PICO sends a signal and waits for 5 seconds and if the door gets opened, PICO moves forward and performs the necessary action. Video link - http://youtu.be/wty2N2sWevY 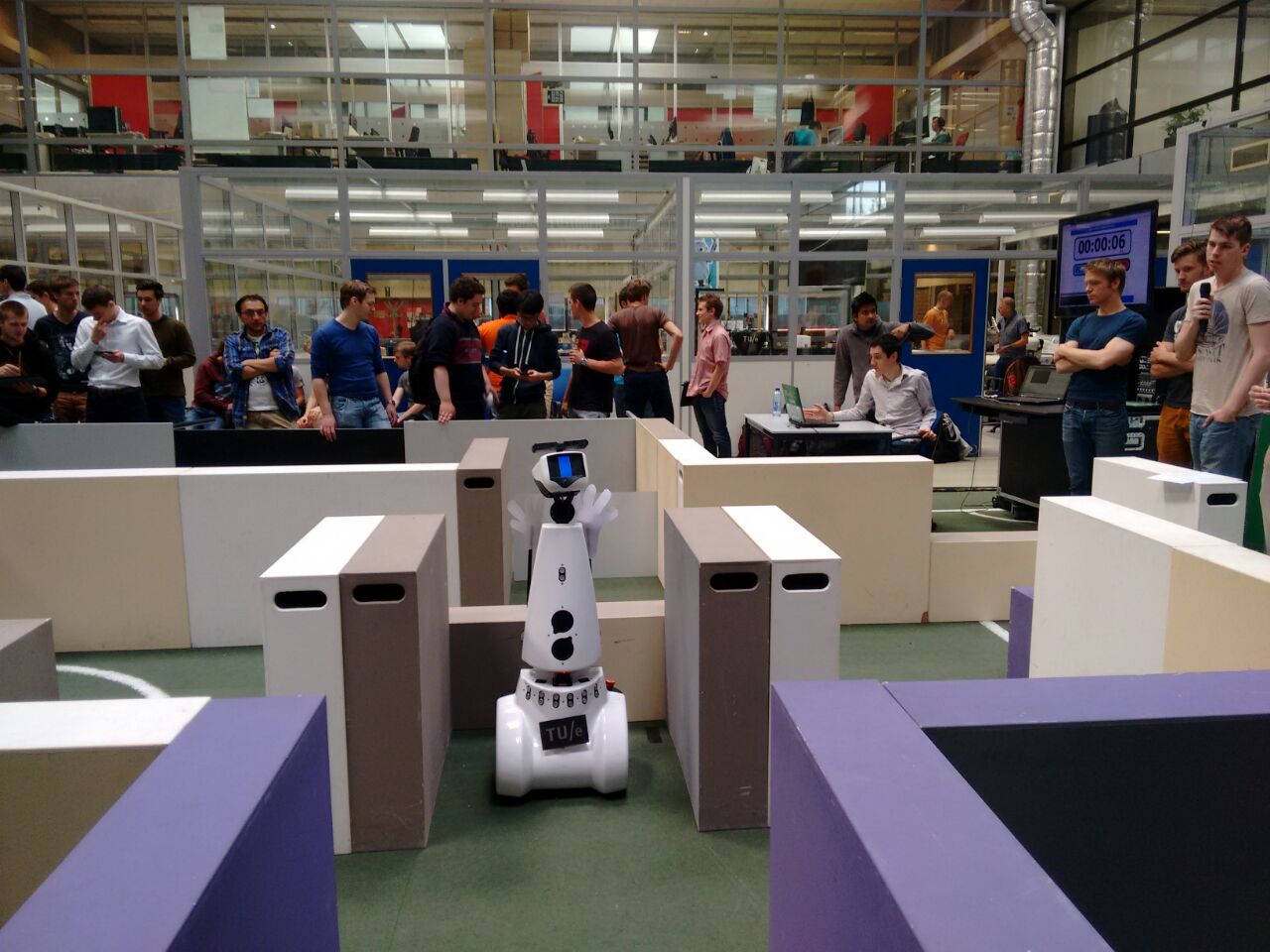 Trial 1-
As seen in the above photo of the maze, there was a 4-way intersection in the beginning, for which our code was not adequately tested and tuned. As expected, it did not work, and the robot hit the wall while cornering.

Some of the code we're proud of

We are generally proud of the structure of our main loop which just calls the different functions like monitor(), Coordinate(), etc sequentially. This makes the scheduling of functions easy to understand and easy to debug.

Another piece of code that we found very useful was the usage of enum{} to make the conditional statements more user-friendly. An example is the following, in which we create an enum for the decisions taken by the robot-

enum decisions { goStraight, turnLeft, turnRight, turnBack, openDoor, stop }; For the decision making, we made use of a simple switch case statement with the priorities left>straight>right>back depending on the kind of intersection the robot is located at.

We also found an interesting way to maintain a list of nodes that the robot has travelled, using the "list" package library. The code for updating the list is as follows-

while the function CheckForRepeatedNodes() is as follows-

Key insights learnt from the course