This page is part of the CST-wiki.

The type of driving used in the Maze Challenge was Potential Field driving. Although Drive was initially designed to be a separate block in the software design, the potential field driving relies mainly on manipulating LRF data, and the resultant vector could almost immediately be entered into the Pico IO layer. This negated the need for a separate Driving class. The Potential Field method can as such be seen on the Scan page. The rest of this page will be dedicated to the initial methods considered for driving through the maze.

This is a function that is used to drive through corridors without touching the walls. The function measures the nearest wall and identifies whether it is on its left or right side. There is set a margin in order to avoid a collision. This margin determines when PICO has to adjust its direction. When for instance, a wall on the left is closer than the margin, PICO has to move to the right.

For the corridor challenge, we tried a driving method based on extracting some key points, but that turned out not to be robust. After the corridor challenge, we then considered three options, of which potential field driving came out as a winner. The two other options use the key point method for driving through straight corridors but use a different approach to taking corners. We called the first one the 'simple method'. Basically, this method is developed as a back-up plan. The second approach uses path planning to drive around corners.

The initial driving method we considered was based on selecting key points for various situations, and updating the driving inputs according to those. It turned out that robustly determining the key points was virtually impossible in corners, and the following algorithms would fail whenever the key points were lost.

It should be noted that the Drive class is not responsible for deciding whether it is driving in a corridor, so the algorithms are not robust for varying situations - it expects another class to determine exactly what algorithm should be used at any given time. 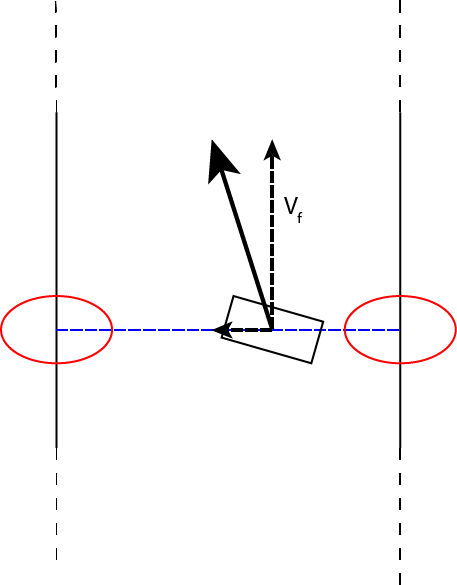 First, the angle of the left and right wall is bisected, which gives a direction straight through the corridor. The deviation between the direction of the robot and aforementioned direction results in an angular velocity for the robot through a simple gain.

Next, a set forward velocity vector is created, in the direction straight through the corridor, (Vf in the picture). Furthermore, the distance from the center line results in a sideways velocity vector. These vectors combined give the desired driving vector (bold black arrow in the picture), which is then transformed to the Vx and Vy relative to the robot since the robot may be rotated.

This type of driving was successfully used during the corridor challenge, and resulted in smooth and fast driving. 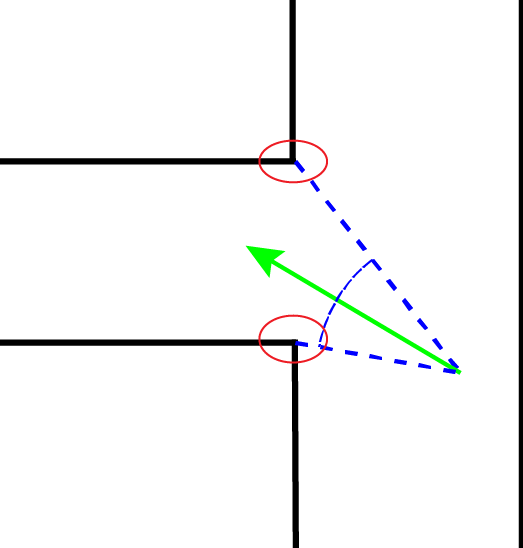 The key points for driving through corners are the two corner points of the corridor Pico is trying to enter. This turned out to be the biggest letdown of this method; extracting the local minimums required while turning was almost impossible to do robustly. Mostly because of this, other options were explored.

On the figure on the right, one option for driving through corners is explored. The robot maintains a constant forward velocity, and makes the corner by varying the angular velocity. First, the desired direction is determined. This is the bisection of the direction to the two corner points, since this vector always points to the exact center of the corridor. Then, an angular velocity is calculated based on the difference between the desired direction and the current robot direction ('error'). A simple gain controller was used, and varying the gain influenced how 'tight' the corner would be made.

This approach is the most simple one; this also means that is not the most fancy one. However, it is still important to have this working because we can always use this method when the other methods fail, or use it as a minimal working example in other parts of the software. In addition, we have learned a lot from it and used is as base for the other methods.

This method is a robust way to pass the corridor challenge. Although, it would not be the fastest way.

The path planning is the second method that we worked on. Path planning can be used when PICO approaches an intersection. Assume that PICO has to go left on a T-juntion; then only collision avoidance will not be sufficient anymore. So, for instance 0.2 meter before the corner the ideal path to drive around the corner is calculated. This means that Vx, Vy, Va and the time (for turning) have to be determined on that particular moment.

In practice, this method turned out to be very hard. Because it is difficult to determine the right values for the variables.