Movement of the robot

Testing and Debugging of the corner detection algorithm

This movie shows our backup algorithm, version of Friday 18th October. This version is able to drive straight and take a right turn. 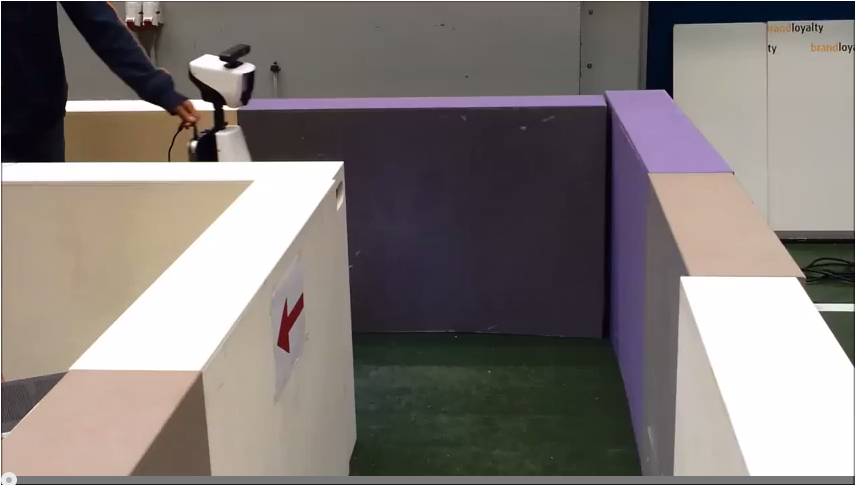 The final implementation is a simplified approach of the previously described. We decided to implement the full solution in just one node and the modular structure was achieved through the use of several functions which are called by a control function. This control function has a state machine structure. The following figure shows the general structure of the algorithm. Basically, the robot is going to drive forward as long as it doesn't find a corner. If it finds a corner it is always going to try to turn right (state 2) unless there is a dead end or a u turn to the left in which case it will try to turn left (state 3). The robot will leave state 2 and state 3 whenever it stops sensing a corner and detects that it can keep driving forward.

1. State 1: Foward_RightWall. Using laser data, the minimum distance to the right wall is calculated. This is denoted by V2 in the following figure. Using this same information an angle theta v2, which informs the robot about its orientation, is calculated. During this state there are two user defined references, one for the desired minimum distance and one for the desired orientation of the robot. Then a proportional controller is used to correct for these two errors with the objective of maintaining the robot in a straight line trajectory.

2. Corner detection: Corner? The robot is at all time running two small algorithms that determine the existence of corners. In order to detect right corners, the information around the minimum distance to the right wall is observed. This is done by generating two vectors denoted by V3 in the following figure. These V3 vectors can be calculated by defining a pair of V1 vectors and performing the trigonometric operations shown in the figure. Whenever there is a 180° angle between these two V3 vectors the robot stays in state 1:forward_RightWall.

When the angle between the V3 vectors is of 90°, then the algorithm identifies the existence of a right corner. The same algorithm is used in order to detect corners that require a left turn, the only difference is that now we observe for an angle of -90° between the vectors and the algorithm is applied along all the laser data for the right plane of the robot. The algorithm searches throughout the data for a corner that requires a left turn and, if found, calculates the distance to that corner. Once the distance is below a threshold a left turn will be executed.

3. State2:Turn_right. When the detected corner leads to an exit to the right the robot is going to turn in the clockwise direction until the two V3 vectors have again a 180° angle between them. This is done as well using a proportional controller, which was tuned during the experimental sessions.

4. State3:Turn_left. Whenever the detected corner leads to an exit to the left the robot will start rotating in the counterclockwise direction until it senses a straight corridor again. The following figure shows how this is done. An angle Beta is calculated between the V3 vector and the Y coordinate of the robot's reference system. When this angle is equal to 5° then the robot jumps again to state 1 since it senses that it can drive forward once again. In the case in which there is a U turn to the left of the robot, then this turning left algorithm is performed twice.

Robustness was given to the mentioned algorithm by applying constraints that limit the right/left turns in case of wrong data that could be interpreted as a corner detection (for example, the resulting vector when the laser observes the opening of a hall while turning left or right, or the resulting vectors when some of the laser data is zeros due to undetectable points). 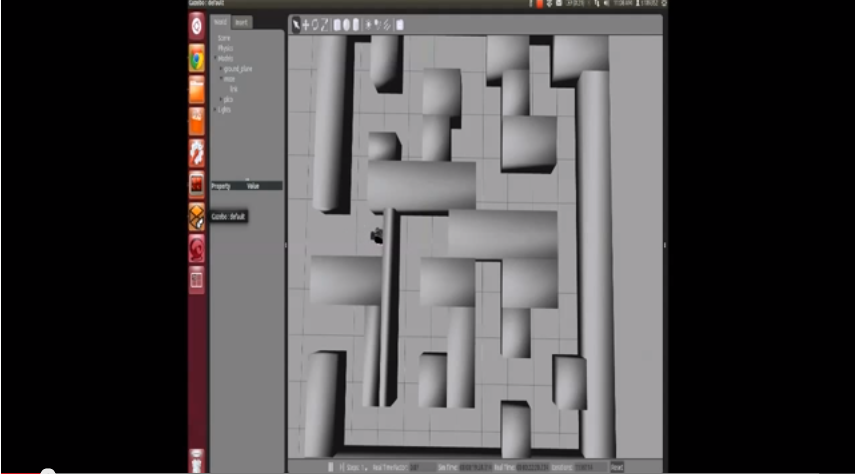 Evaluation of the Maze Competition