The software design is based on two nodes: one for arrow recognition and one Core node for all other operations. The camera node processes the images from the camera and will send 'left', 'right' or 'no arrow detected' over a topic. The Core node listens to the topics 'scan', 'odom', and the topic from the camera node. Publishing is done over the 'cmd_vel' topic. To maintain structure within the node, several structures and classes are used:

Apart from the classes, functions are used for corner detection and for the centering whilst driving through a corridor.

The 'main' loop is where the real program runs. It starts with the declaration of variables and a few initialization commands of ROSS. Hereafter, the subscribers and publishers are assigned their respective topics. A while loop is used to run the node in combination with the condition 'ros::ok()', a rate definition of the form 'ros::Rate', and 'ros::SpinOnce()' to refresh the subscribers and publishers.

Elements of the main loop are run using a token-like structures with local boolean variables in the 'main'. An example will be given for making a turn. When a corner is detected,

<br\>Here is a list of the booleans used while making a corner:

<br\> The motivation for this strategy is the ability it gives to dynamically jump through the loops. By setting the parameters in a certain way, one can choose the part of the code that is executed. This is used when checking for a right corner just after finishing the previous one. If a corner is found, then the booleans are reset and 'corner_detected_right' is set to 'true'. Also the distance to the center of the corner needs to be set to a value. Now, the algorithm will not continue with driving but will make a new turn to the right. 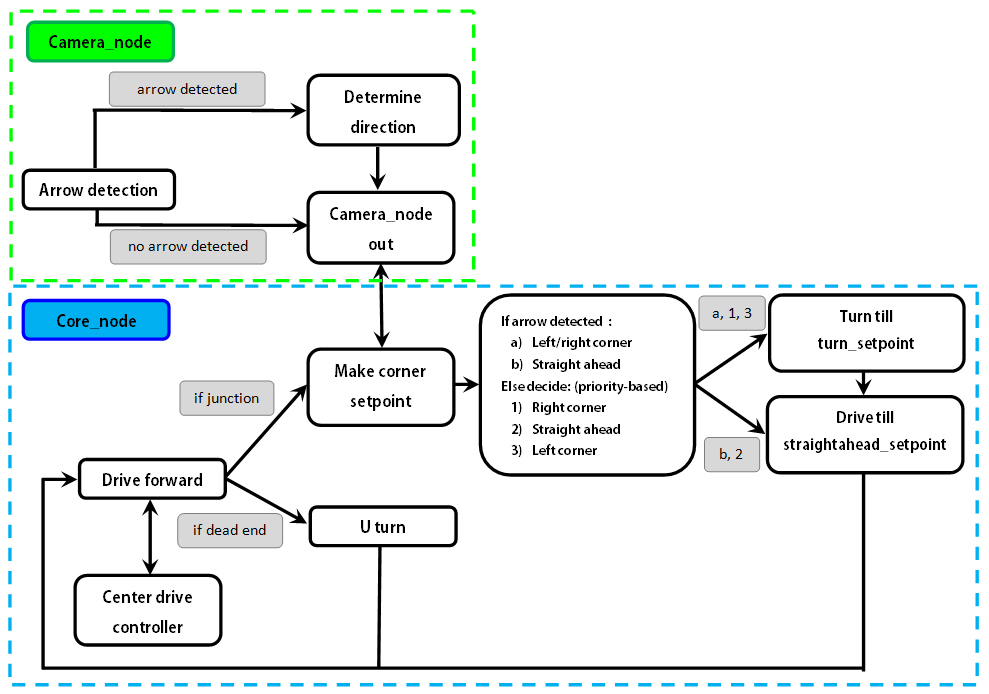 In order to make the software robust against holes in the wall or things like this, a small fan of laser points is used. While testing the robot detected a corner at a location where this really wasn’t possible, the reason turned out to be a small gap between the plates of the maze. So instead of basing the corner detection and path centering algorithms on a single point of the laser array, a number of points are now used. For the algorithms that determine the corner detection and the centering of the robot in the corridor, specific angles in the array of laser data points are used. Around this angle, we now use a series of points and determine the minimum of this series. This point is then used as before as the distance at that angle. In the picture below, this is the marked point. The series will consist of 15 points for a specific angle, which for a total of 1081 data points around 270 degrees, comes down to a fan of about 3 degrees. So when the corridor has a diameter of 1m, the robot can handle a gap of up to about 3cm. 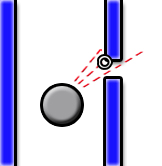 For driving in the center there are 2 modes in which PICO operates: "near-wall" and "middle".

PICO will determine the distance perpendicular to the wall by selecting the minimum value of a range of lasers left and right. It will then turn left of right.

When it is near the middle of the corridor, Pico will use laserrange data front-right and rear-right of itself to align itself to the wall. 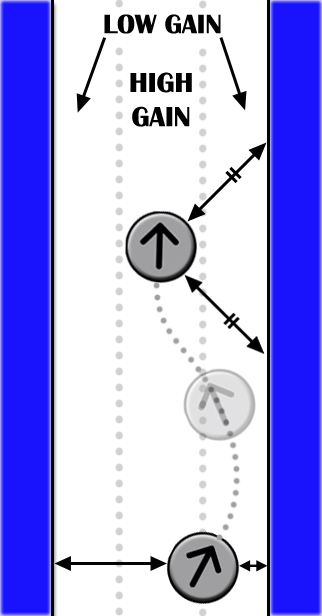 Left the original image with detected green dots, right the HSV thresholded image. We still have to figure out how to convert these green dots to whether or not the arrow is pointing left or right. (edit: this is no longer true) (we're also using the 2.x API (cv::Mat) instead of OpenCV 1.x API (CvArr))

Here the algorithm that is used to recognize the red arrow and its direction is described.

First the image is split up into its hsv values. This way the colors of the image can be easily distinguished. The HSV format is a common cylindrical representation of the Red/Green/Blue color model, it has values from 0 to 255 for each of the parameters. HSV stands for Hue (the color), Saturation (~amount of color) and Value (bright/darkness), which together make up the parameters for the color of a pixel. A representation of the HSV model is shown in the figure below. 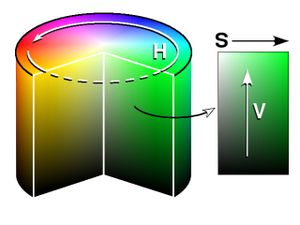 The HSV image is then eroded to remove any noise from the image. What it does is to remove surfaces that are not connected to other surfaces. So it will remove small surfaces from the image and it will take away part of the edge of a larger shape. So the downside of this erosion is that we will "eat away" a little from the arrow. However any small dots or small surfaces that are not a part of the arrow will be removed. A cross erosion element of 3x3 pixels is used. The arrow after the erosion is shown in the large image below.

The eroded image is then "closed". This means that we attempt to close any gaps inside the image. So what is does to the eroded image of the arrow is to close any holes in the arrow and also it fills the outsides of the arrow a little. So it also removes some of the damage that the erosion might have done to the arrow itself. A Rectangular closing element of 12x12 pixels is used. The rectangular shape was chosen because it will theoretically not remove the edges and shape of the arrow as much. A circle element might for instance blur an edge of the arrow. In the closing figure below, the way in which closing works is shown for a circle element. The arrow after the closing is shown in the large image below. 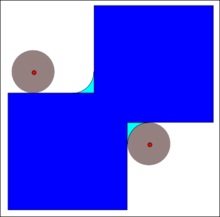 The function goodfeaturestotrack is then performed on the closed image, here the algorithm finds the corners of the image and saves their locations. In the large image below, circles are drawn at the positions of the found edges so we can see where they are located. These corners are used to see to what side the arrow points. 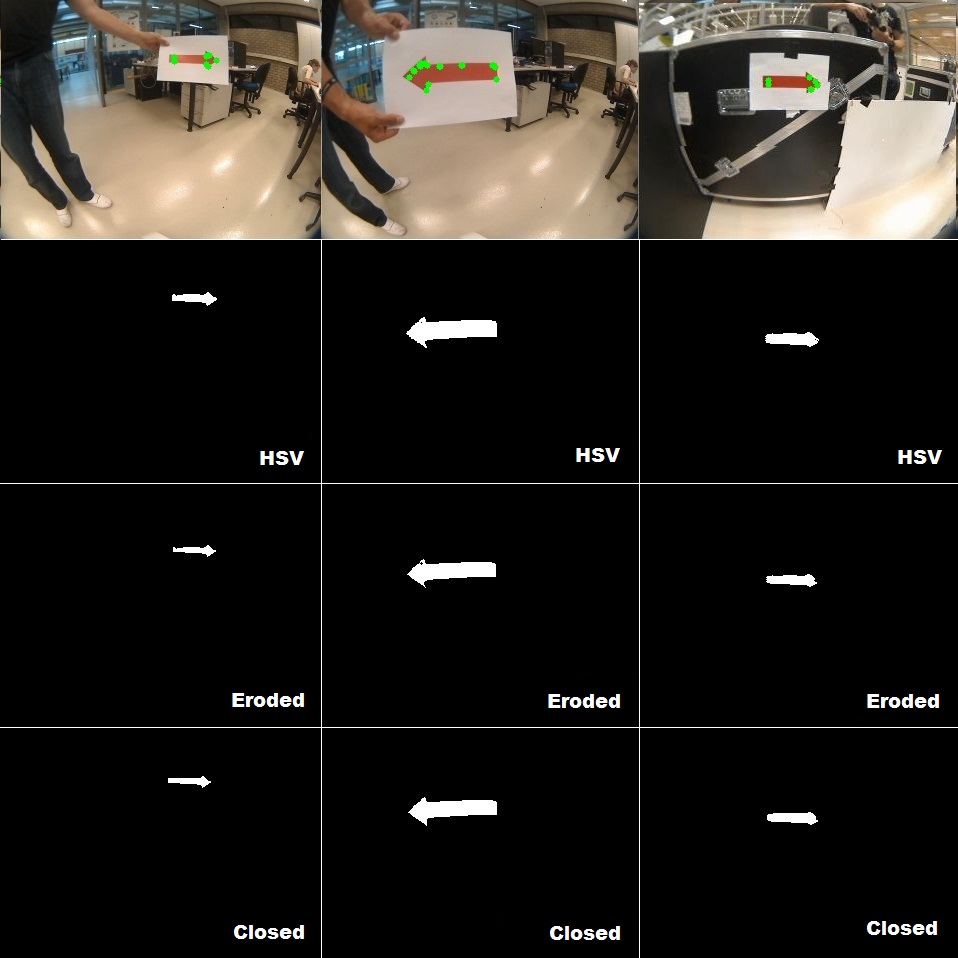 So up till now we have an algorithm that first finds only a specific color and blocks out the rest of the image. That image is then eroded and closed in order to remove any noise. After that corners are detected on it, and these corners can now be used. However, first we need to know that pico is looking at an arrow. This arrow detection is done by first eroding the HSV image very heavily. This means that only very large areas in the camera will still be present in the image after the erosion. So if the arrow would be far away for instance, then the image would return black. Then we use the function goodfeaturestotrack to draw corners onto the image, if however the image is completely black, no corners can be drawn. So if the amount of corners detected is zero, we know that we are not looking at an arrow. These steps for detecting if we are looking at an arrow are implemented before the other processing steps in order to not do unnecessary computations when we aren't looking at an arrow. So say we now detect that we are looking at an arrow and the corners of the arrow are drawn on the closed image. We first calculate the mean of the x value of the corners, this means that we try to find the center of the arrow, here we draw a vertical line. Then we use two separate properties of an arrow to see to what side the arrow is pointing. First, we sum up the amount of corners left of the center (the vertical line) and right of the center. We know that due to the shape of an arrow, we should theoretically have more corners on the side where the arrow is pointing than on the other side. So if the amount of corners to the right is larger than to the left, this algorithm gives out right. Second, we look for the maximum and minimum y value on either side of the center and calculate the difference per side. We know that the side to which the arrow is pointing should have a larger maximum vertical distance than the other side. So if this distance is larger to the right than to the left this algorithm gives out right. Now these two algorithms are compared, and whenever they agree on a side we know that the arrow is quite certainly pointing in that direction. To incorporate for any noise or other problems, we make pico only respond to the notion of the camera whenever the functions agree for a few times in a row (so 2 or 3 times right, for instance).

In the clips below you can observe this detection method in practice on the robot, here the side that the robot gives out is denoted by the green bar on a certain side.

Arrow recognition (with the given bag file)

Arrow recognition (more robust algorithm and with our own bag file) 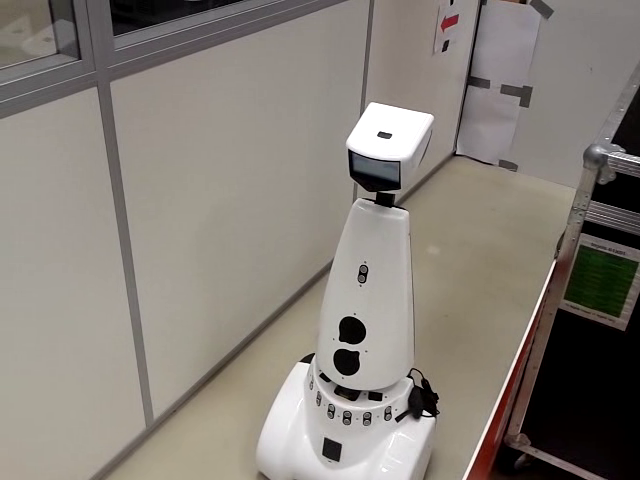 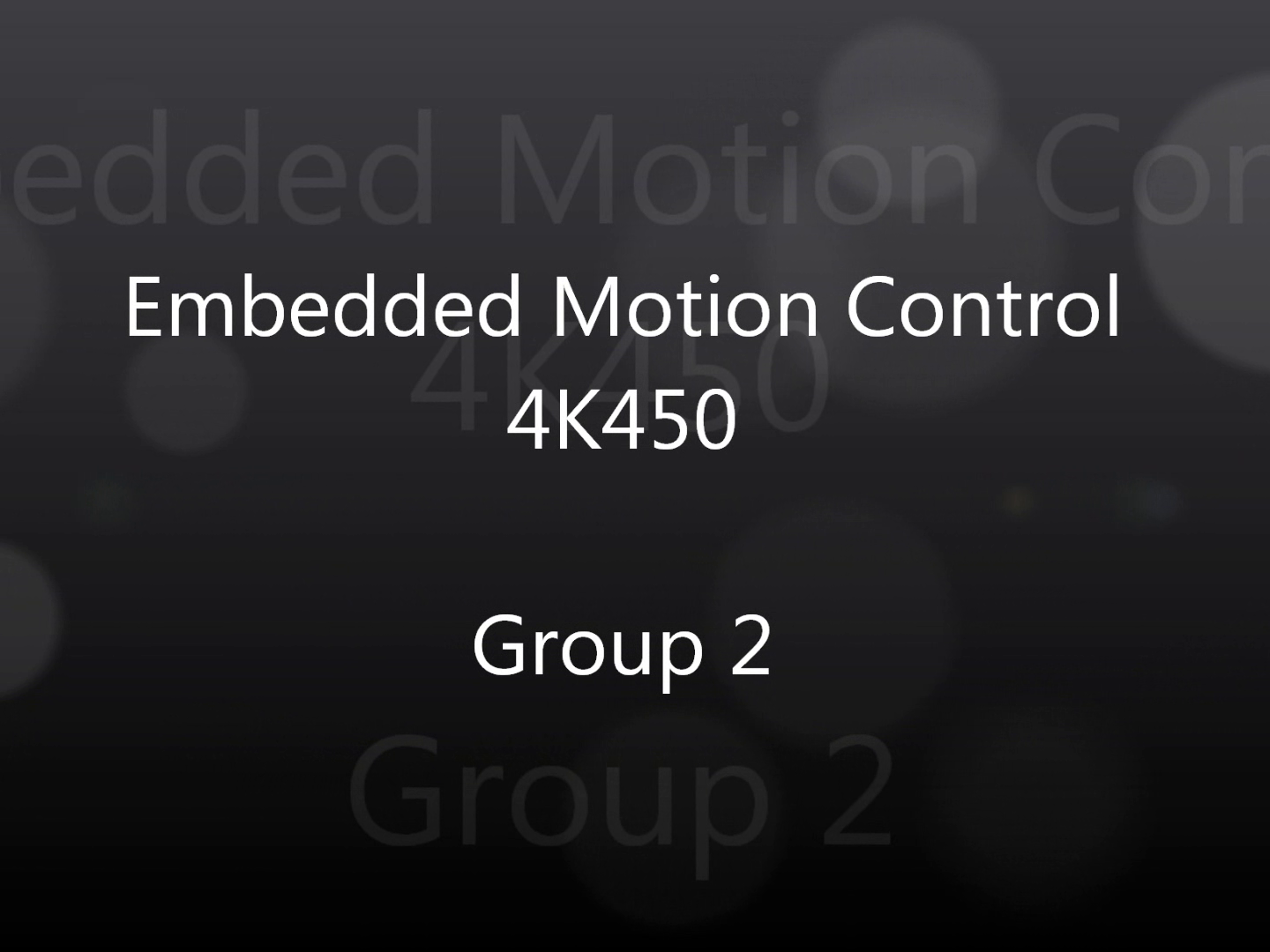 In this section we present future recommendations, which we were not able to implement anymore.

This way the direction of the arrow can be detected more robustly than the algorithm we used. This can also detect if the arrow is pointing in the drive straight arrow direction.