The laser-output from the robot is given in polar coordinates. The first thing done was to make a conversion to Cartesian coordinates to get a better feeling of how to treat the data, and the possibilities this would give for simplification of the data. For this conversion the following data was used:

With basic algebra the conversion was made, which is shown in Figure 1. 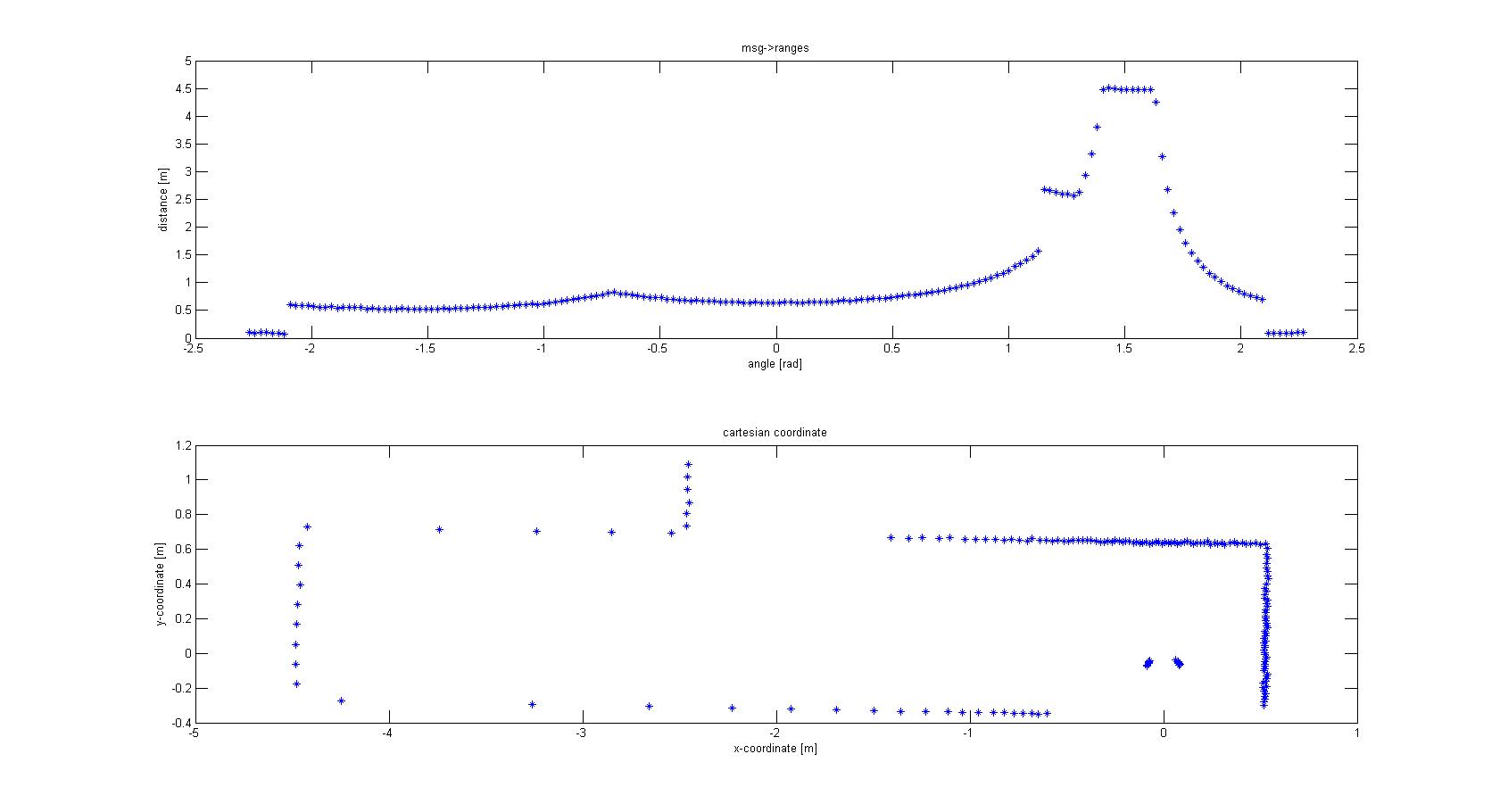 From the Cartesian plot some decisions can already be made. For instance, the data points that are plotted near the robot will have to be removed, since these are laser points that are projected on the robot itself. Furthermore we see a lot of points that are far away from the robot, all at a distance close to 10 meter. This is the maximum range of the laser points on the simulated robot, but on the real robot this might be different and can give a disturbing input. Therefore the data points which are relevant to the robot is limited to a range of TOO_FAR_TO_MAP meters, which is a static float to be fine-tuned to achieve good vision for the robot without large disturbances or processing time (limiting the data points you take into consideration when making decisions can speed up calculation times). Here a value of 1.5 meters was chosen. 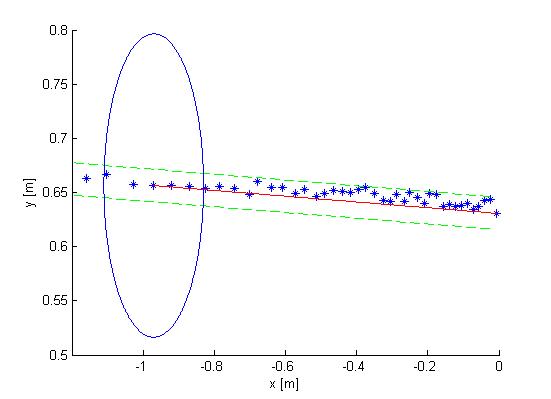 The fitting of the lines over the data points is done in two steps. First the line start has to be found by making a start line. This start line is MIN_LENGTH_LINE points long. This number can changed be to make the algorithm more robust; here a minimal length of 4 points was chosen. The requirements for the line start are:

If these conditions are not met, no start line can be made and the search repeats, now with the next data point as starting point. If the start conditions are met, the line between the first and last point of the start line can be appended. This is done by checking if the next data point can replace the end point of the line that is appended. In order to do this, similar conditions have to be met as for the search of the start line, and the point has to lie between the same offset. If the conditions are not met we do not append the line and start searching for a new line with the algorithm described above. However, to map lines at the edge of your region of interest, only if LINE_UNCERT_COUNT points in a row lie outside the region of interest we start looking for a new line (a value of 5 points was chosen). This is done to prevent that if a few points lie outside the region of interest but the wall actually continues the algorithm starts looking for a new line while it can easily continue appending the line it already found. Figure 4 shows the resulting end point of a line.

With this mapping algorithm the walls are not perfectly mapped. Some walls are split into two lines. One possible solution for this is to change the offset allowed for the points to be added to a line. However, this can cause the algorithm to miss corners easier. This problem was therefore solved by merging lines which clearly fit the same walls. To achieve this the distance between the end point of one line and the start point of the next line have to lie close to each other (maximum of MAXIMAL_DISTANCE_LINE_MERGE meters, an educated estimate of 0.2 m was chosen). Furthermore the slopes of the lines need to be close to each other. One problem that arises is that two lines of a wall parallel to the orientation of the robot can have a very positive slope, or a very negative slope. To account for this fact the slopes are converted to angles relative to the x-axis. If the angles differ less than π/6 rad and the end point and start point are close enough to each other the lines are merged. Since all corners in the maze are roughly π/2 it is not likely that two lines depicting a corner are seen as one wall and merged. Figure 5 shows the merging process.

Detection of the environment

Figure 5 gives the output of the mapping strategy: all walls are represented by one line. The next step is now to find the position of these walls relative to the robot and find out whether these lines are of such importance that the robot needs to undertake action. For this a part of the code that was used for finding out whether a point was between certain offsets of a line was recycled. Replacing the laser point position with the robot position (which is always positioned at the origin) and adjusting the offset this makes an easy check to see whether a robot is close to a line and if a reaction is required. However, the recycled mapping algorithm does not take the distance to the start or end of the line into account. As long as the laser point is inside the region of interest and between the offsets the point is added. Now however, the robot should be close to the actual wall and not stand close to the extension of the line. An additional condition was added: the x or y position of the robot should line between the x or y positions of the start and end points of the line, taking an additional offset into account. Figure 6 shows the region that was checked.

This gives the baseline for the most important algorithm in the code: wall avoidance. If the robot comes in the region depicted in Figure 6 it should stop moving and make a very wise decision to not crash into the wall. Steering away from the wall is such wise decision, and using the angle of the wall relative to the robot it can turn away from the wall and face free space. This is an ultimate situation, when the robot’s initial position is very close to the wall or the steering algorithm failed working. However, in the desired situation a wall alignment algorithm together with the algorithm for steering into openings should prevent such situation to occur.