In this chapter the libraries processing of the vision information are described and needed for communication. The startup procedure of the earth computer is also included in this chapter.

Video processing on the earth station

To navigate through the unknown mars landscape, vision information plays an important role. By using vision information, the positions of the lakes are determined which are in the field of view. This information can be used as input to determine the trajectory of the mars-lander. Due to the limited onboard computational power of the Mars-lander, the main part of localizing the lakes is done by video processing on the earth-computer. The video processing is based on both color and dimensions of the lakes in the captured images. The centers of the lakes is determined in terms of pixels and linked to the sender which communicates with the Mars-rover. Fig. 5.1 roughly represents the structure of the image processing. Especially if unexpected output is given by the vision system, it can be useful to roughly understand the main steps of the vision module.

The main steps will be described shortly in the remainder of this section.

Most of the time only one lake is found, or two in rare cases. If the corresponding lake is not found, zero is given as output for the second and for the third lake respectively.

The earth computer can be started in the following steps.

more info about the color-classification. Start the Simulink scheme. 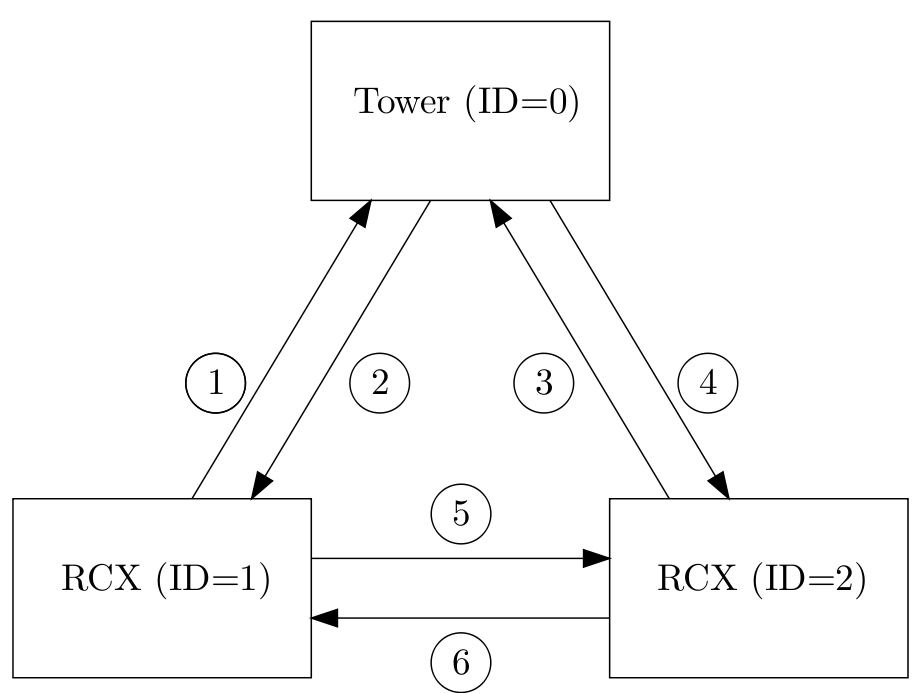 for RCX brick one. Next, the C-file com.c should be included using

Make sure that you first define the ID before you include com.c. The C-file com.c is makes it possible to send and receive integers or arrays of integers. The main functions in this file are called com_send and read_from_ir. The source code of the C-file com.c can be found here by choosing Lets Talk.

The main function to send integers is com_send.

These global variables can be read in all your functions, for example by calling TRIGGER1. Sending an integer with message type 1 will result in the adjustment of the global variable TRIGGER1 at the receiver side.

To use the function read_from_ir, a thread (see [1], page 169) should be started. The task of this thread is to constantly detect whether or not a message is received at the infrared port. If a message is received, the variables TRIGGER1, TRIGGER2, TRIGGER3, TRIGGER4, TRIGGER5, TEMPERATURE and COORDINATES are adjusted depending on the message type. To start the thread, first define the thread identification like

To start the thread your main file should look like:

In the function lnp_integrity_set_handler the porthandler is defined. If a message is received, the porthandler defines what to do with this message. The function lnp_logical_range is used to set the infrared range of the RCX brick to ”far” in order to communicate over a long range (± 5 m). To prevent that two or more threads are writing the variables TRIGGER1, TRIGGER2, TRIGGER3, TRIGGER4, TRIGGER5, TEMPERATURE, COORDINATES at the same time, semaphores are used (see [2], chapter 6). For example, if another RCX brick is sending a message to adjust the variable TRIGGER1 and a thread running on this RCX brick is adjusting the variable TRIGGER1 at the same time. The function sem_init(sem_com) initializes the semaphore sem_com to one. So if you want to change one of the variables TRIGGER1, TRIGGER2, TRIGGER3, TRIGGER4, TRIGGER5, TEMPERATURE, COORDINATES, semaphores should used. Therefore you cannot simply write

but instead it should be