All concept ideas can be found via the Brainstorm page, here we only listed the select ideas which we further developed for our project.

Our Brainstorm led to the division of 3 main groups for design: Package Receiving, Package Delivery and Personal Mailboxes. Within these groups we brainstormed various ideas. When we reconvened, we realized we ended up having 4 component groups for a larger package delivery system and then concepts for the personal mailboxes.

The component groups were the following:

We decided to focus on these component groups for the continuation of concept selection, because it already split the delivery system into smaller parts we could work with. Elaboration on selections from these group would be more detailed than if we were to design the system as a whole. Also it allows for expansion and variation of the whole delivery system since the individual components could then be shaped and sized to fit other delivery specifications.

Also, although the personal mailbox ideas were interesting to pursue, we chose not further elaborate on these because we thought reaching a greater audience of people would be more important for the diffusion of both drone delivery and this pick-up system. For later advances, possibly these personal mailboxes will become of use. Concept 8, which scored high on the requirements assessment, looks like a mini version of the package pick-up system we are hoping to develop.
This indicates that a modular design may be a smart idea to continue throughout the project.

Within the Openings group we had several ideas: The sliding lid, bristles, and “the Flap”.
(See Package Receiving Concepts for drawings & elaboration)

Of the three concepts, the sliding lid seemed the most appropriate to continue on. Although the Bristles and The Flap were mechanically simpler to make, they also allowed the possibility for unwanted items to come into the system. The sliding lid provided security for the system and also provided a means for the drone delivery to communicate somehow with the package delivery system (via the opening and closing of the doors).

Within the Transport group we also had several ideas:
(See Package Receiving Concepts for drawings & elaborations)

Of these ideas, we eliminated some almost immediately because of the mechanical complexity and space which these systems would take up. This would make it difficult for maintenance. Also, unfortunately, for our project we do not have the time (and possibly not all the knowledge) to well develop these ideas (The Mill, the Rollers or the Conveyor Belt).

The choices left over where the Rotating Disks & the Chimney. These two are both mechanically relatively simple to make, although we do not have knowledge about whether either rollers with varying grades of friction or bristles varying with distance in between will be the better selection for design. Therefore, we chose to focus on both of these option for the Transport design and to test which one of the two would make a better solution.

26-September:
After some time we came to the conclusion that the flap-chimney might work pretty well. However, we quickly realized we had forgotten a very good option for transporting the packages vertically: an elevator system.It would be a far better solution than the ones we had already thought of above and thus now have switched our research towards elevator systems.

For the package to pick-up group we had 2 ideas: the Box Drop and Conveyor Belts
(See Package Delivery Concepts for drawings and elaborations)

When comparing the two ideas we discovered each functioned in unique ways.

The box drop was mechanically pretty simple. The box would drop until it was above a full space. However, this created the possibility for all boxes to shift downward when a package is picked up causing the system to re-label the package locations. We did not find this very efficient for software development and the functionality of the system.

For the conveyor belt system, we discussed that is was mechanically slightly more difficult to create, BUT it would allow the system to designate boxes to specific cubbies. Also, this type of system is used in logistics already to designate packages to different locations, so it should be easier to find ideas to help us build and tweak it to fit our needs. This is why we chose for the conveyor belt system. 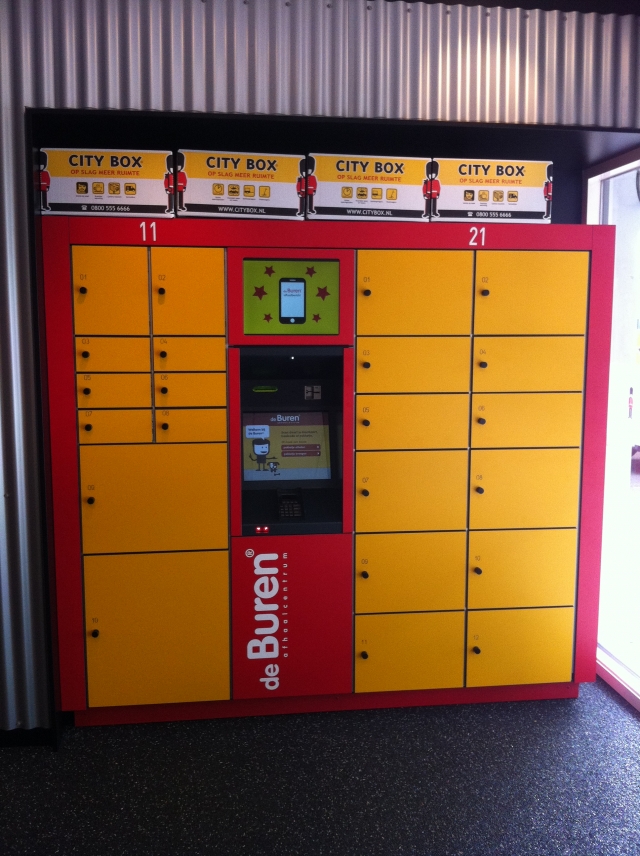 Lastly, for package pick up we had 2 ideas: Personal Keys vs Random Codes
(See Package Receiving Concepts for drawings and elaborations)

Personal Keys method would require each person who has a box to have a key. Also the system would then have to know that package X goes to that specific designated box. We saw two issues with this idea:

The random Codes methods would require the package being delivered to be coupled with a code, which the system would then read. The nice thing about this is that the system can just put the package in any cubby and designate the code to unlock the box when a person comes to retrieve the package. Such systems already exist such as the lockers at the train stations for example. This would take up less space since there would be less cubbies required because all people living in 1 area would not receive packages all on the same day (Assumption).

Since we do not have neither the time nor means to fully develop these ideas, we have chosen to fully work out the concepts on paper (the wiki). This includes how the component will look and function, aspects considered when developing this component, how it connects to the system as a whole etc. We ‘’may’’ attempt to construct a prototype or model of at least 1 of the 4 components.


Now we head through the individual segments of the large package delivery system from start to finish.
BACK: Brainstorm
NEXT: Opening