This is the third phase of the system. After the elevator has brought the package down to the cubby level. 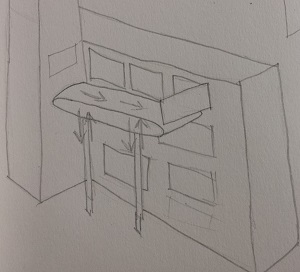 The chimney to cubby process consists of a conveyor belt capable of transporting packages in a horizontal direction. The belt itself can move in a vertical direction. Furthermore the conveyor belt has a weight sensor to measure if there is a package on it. The cubbies consist of two doors, one for getting the package into the cubby, and for the user to take the package out. The only doors referred to on this page are the ones used to get the package in to the cubby. The cubbies are divided into rows and each cubby has its own number. 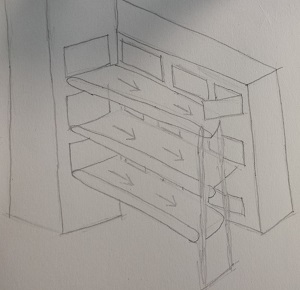 This method is similar to the previous one. The main difference is removing the ability of moving the conveyor belt in vertical direction which causes more costs and maintenance. Instead, there will be multiple conveyor belts above each other. This will require multiple exit points from the elevator. 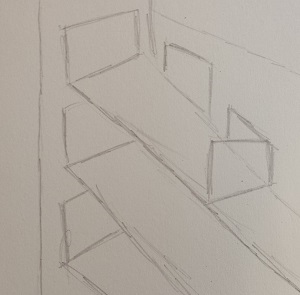 This method is similar to the previous one as it also uses multiple elevator exits. The difference is that instead of conveyor belts, it uses a slide. This will make the installation a lot cheaper, packages will simply move by gravity. This will of course require a different placement of cubbies. The placement will make it less space efficient. 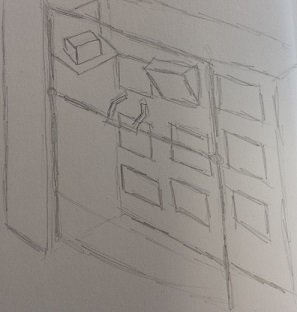 Similar to some newer soda machines, this method uses a robot arm. The arm can move in two directions. First it retrieves the package from a platform where the elevator left it. The cubbie will open its door, not like a door in the previous ones, but with the opening at the top. The arm will the drop the package above the open cubbie. 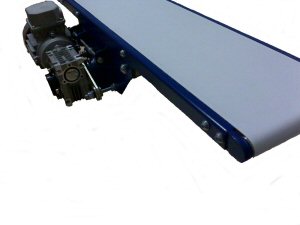 Considering all the pros and cons, expenses and maintenance, we decided to choose option 2, with multiple conveyor belts. The elevator will drop the package at the predefined level, the cubby will open its door and the conveyor belt will move the package to the opened door, sliding it into the cubby.

As for the conveyor belts there is a lot available, we decided to choose a small and not too expensive one. The packages are not very heavy and it will be cheaper to make the system modular. For our system we have chosen this mini conveyor. Three of these conveyor belts will then be placed above each other.

We want our system to do more than just receiving packages for drones. We also want to use it for regular package delivery. This means that some of the lockers will be used for packages from drones and some will be used just by placing the package in from the front door. Some of these lockers will be bigger, to deliver packages that a drone cannot carry. Others will be simply used by people that do not want to pay extra for their delivery.

In 2013 around 120 million packages were delivered from companies to consumers in the Netherlands, which is nearly 330 thousand packages per day if deliveries occur every day of the week. By contacting the PostNL parcel service we found that presently 600 thousand packages are shipped every day. From this number it is difficult to make an estimate of how many lockers a system in Eindhoven for example would require. The amount of deliveries in Eindhoven per square kilometer is of course relatively high. Exact numbers are not available but we have contacted PostNL for these numbers. For an optimal system we would also need to know how many packages of which sizes are delivered. However, these analyses could be done by the companies when implementing the system, as it would be modular.[1]

The idea is to make columns, afterwards multiple rows can be added. Although for a good system we would need to do research with data that is unavailable at this time, we can make an estimate of a column, also based on already existing parcel locker systems. At the bottom we would place the biggest lockers, since it is inconvenient to crouch that low for a small package. The height would be around 50 cm, which covers most of big packages. On top of that, we would place three smaller lockers for packages that are too big for for drones to carry with a height of 30cm. Then we would have three layers of 15cm lockers, meant for the packages delivered by drones.


BACK: Chimney
NEXT: Cubby to Person