This is the second phase of the pick-up system. Below you find the process that followed for the development of the Chimney. 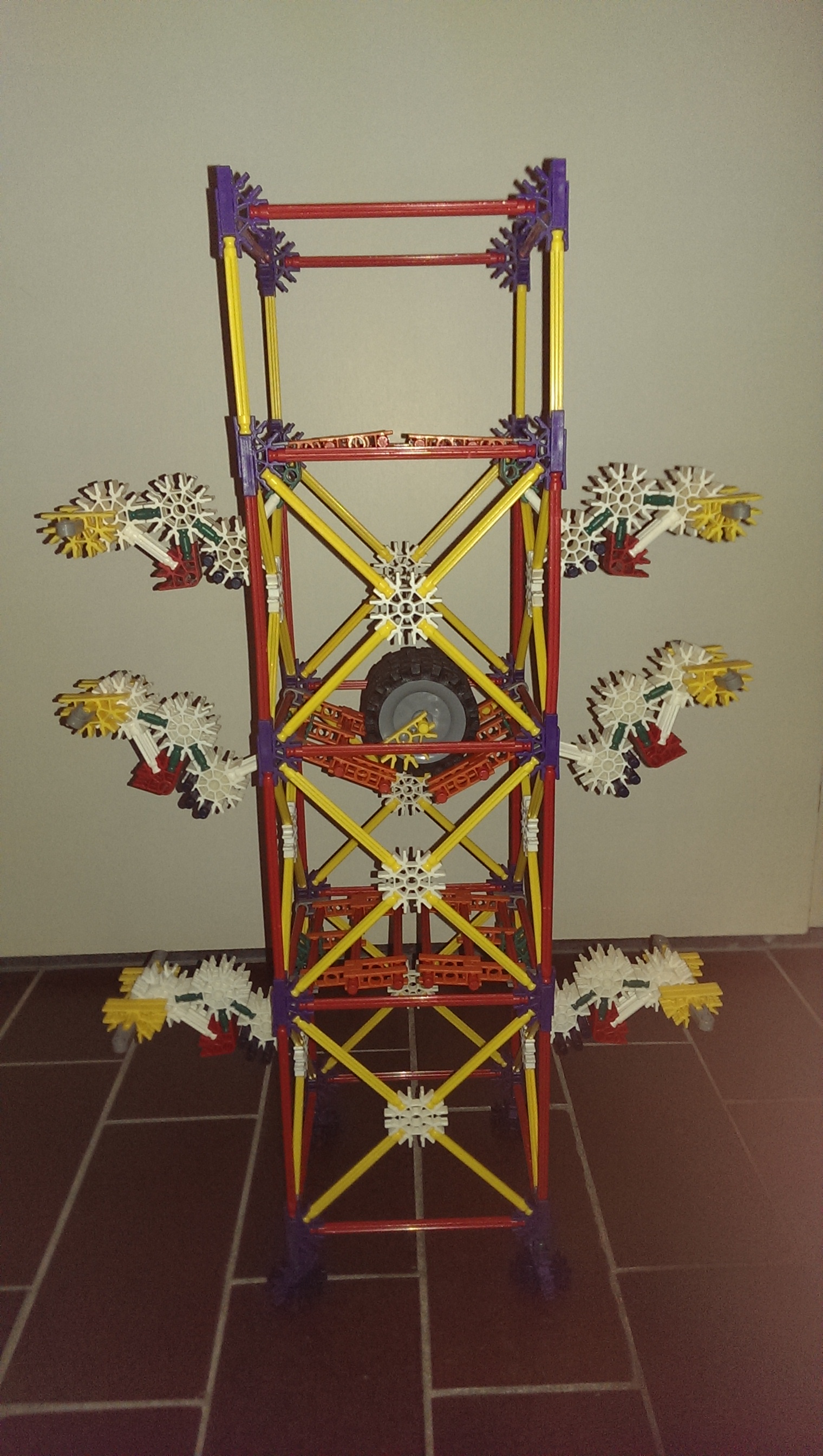 We have started working on the chimney with the flaps first. We could not find any literature on such a system. Therefore, we decided to first just try it out. To do this we used K'nex. K'nex was chosen because it is easy to build something with, easy to make changes to and it keeps the structure open, so it is easy to see what is happening inside. We then built a model with K'nex which uses counterweights to provide the necessary resistance to the flaps. The model was also tested by dropping some heavy objects through it and the system looked promising. The model successfully made smaller drops out of one large drop, guiding the package down relatively calmly. We even dropped a telephone through it. This model has the same functionality such a system would have in our mailbox, but we do not think using counterweights are very practical.

For this, we were developing a test plan. The main question was: whether rollers or flaps are better at bringing the package down through a chimney. After a week we came to the conclusion that the flap-chimney might work pretty well. However, we quickly realized we had forgotten a very good option for transporting the packages vertically. An elevator system for the packages is the option we completely overlooked. We then quickly came to the conclusion that that would be a far better solution than the ones we had already thought of. Therefore, we have now switched our research towards elevator systems.

We found existing solutions to the problem we had in our chimney. In the chimney packages have to be moved down to a lower level. Of course, this has to happen with caution so the content of the package does not break. The solutions we found are made by the company Qimarox, which is a leading manufacturer of components for material handling systems.[1] Their material handling systems are made in such a way that they are quickly and easily installed and modified to fit its application, they are versatile and can combine different task, and they require little maintenance.[1] Especially the first and the last of these three properties come in very handy in our application. They offer three different products for the vertical movement of packages. Of these three products, two are especially promising for our chimney, the Prorunner mk1 [2], and the Prorunner mk5 [3].

The Prorunner mk1 looks most like the package elevator we had in mind. It is a simple platform that it moved up and down. It is a sturdy steel structure that can lift packages up to 100 kilograms and has a capacity of up to 650 movements per hour. These specifications both exceed our demands. Such a system in our chimney will only have to be able to handle packages of up to 2.5 kilograms, and it will never receive more than 650 packages in an hour.[2] Maybe it is possible to make a similar system that is smaller and is more limited, which could make it cheaper too. 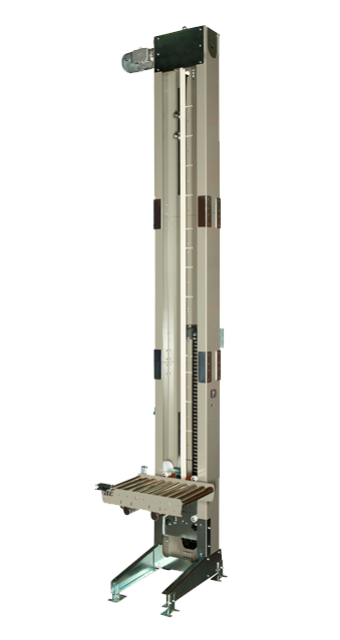 The Prorunner mk5 is more like the 'Mill' concept we had in mind. It makes use of a vertical conveyor belt with platforms attached to it. This is also a viable option, but can handle even more packages an hour than the Prorunner mk1, namely 3,000, and it can handle packages up to 50 kilograms. 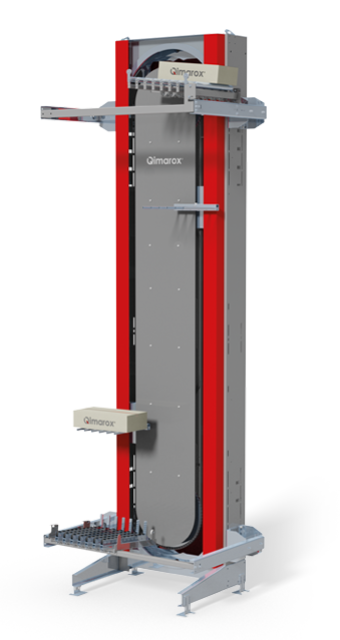 After looking at the specifications of both products a system like the Prorunner mk1 looks more viable for our chimney than the Prorunner mk5. It is smaller, simpler, and cheaper. It would be even better to have a similar system that does not exceed our requirements as much as the mk1 does. This would make it even cheaper and just as good for our chimney. The system would only have to be able to carry up to 10 kilograms, which is four times the maximum package weight. It is then well-suited to handle the current packages, and it will still be suitable when the maximum package weight rises. 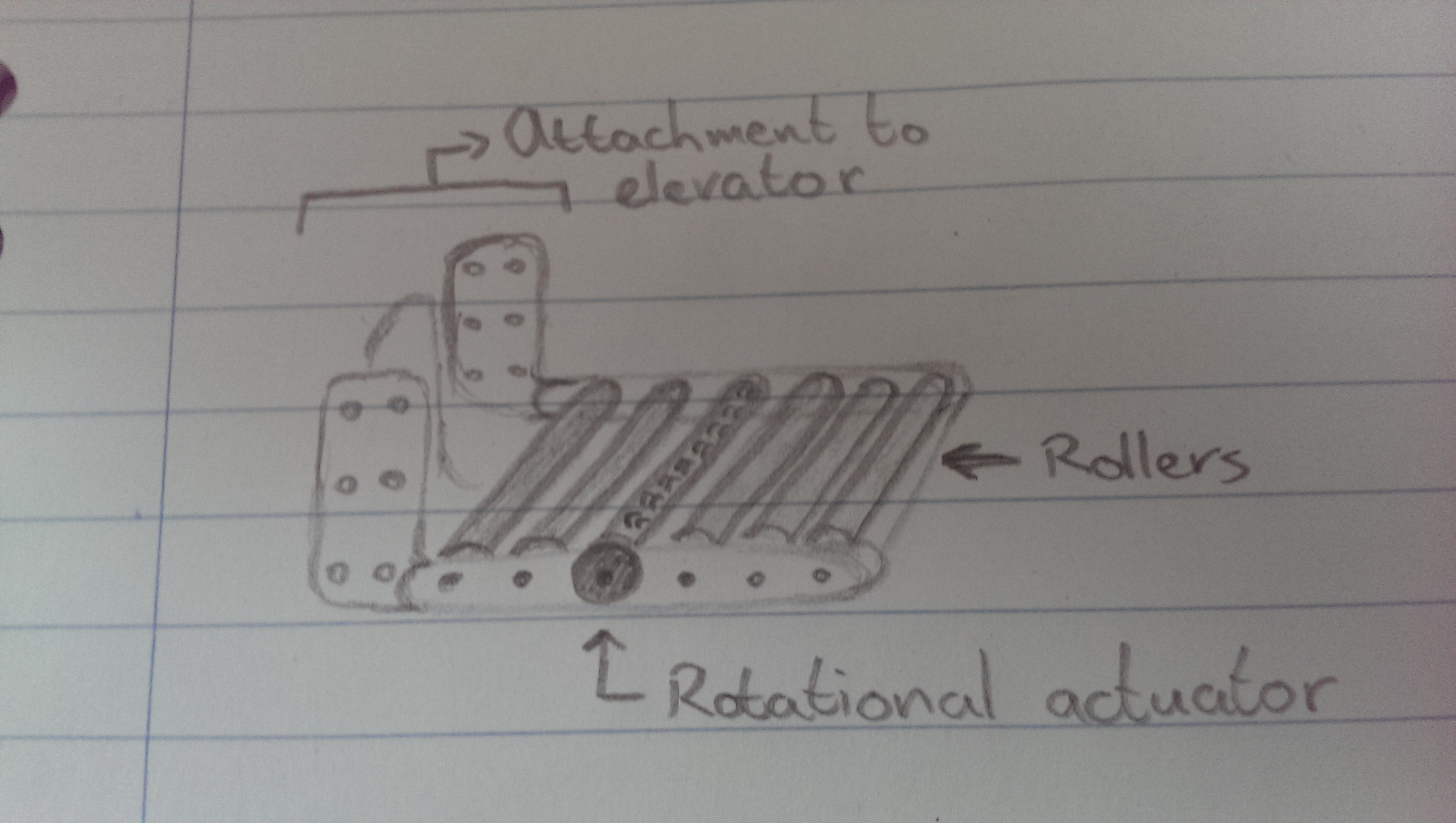 The elevator platform needs an addition in order to be useful in our system. That is, the platform must be able to push the package off of the platform. This will be done by one powered roller among the smooth rollers of which the platform exists. This special roller will be powered by a rotational actuator. This rotational actuator will be powered by a cable on a coil, so it can vary in length, which comes from the control center of the elevator system. From there it is powered on and off when needed. Moreover, this particular roller will have a special surface to have a better grip on the package.

1. Chimney receives package.
The elevator system in the chimney needs to know whether a package is in the chimney or not. This will be identified by the RFID reader in the chimney. Being able to read an ID is the verification for the system that there is a package in it.

3. Chimney drops off package at right level.
The package will be standing on the elevator platform. When the right cubby level is reached, the rotational actuator will be activated. This roller pushes the package off of the platform onto a conveyor belt.


BACK: Opening
NEXT: Chimney to Cubby