The Arduino and the solenoids

We're using an Arduino Uno with 6 outputs which represents a braille character. For testing purposes, we'll be using LEDs for these 6 outputs. Serial Monitor is used for input. Enter the numbers of the LEDs you want to enable (eg. 1256). After you press “send” on the interface or “enter” on your keyboard, the lights corresponding to the number input will light up. We've also added a button and by pressing it, you can reset all lights (the Braille output).

Defining the output of Arduino to Braille 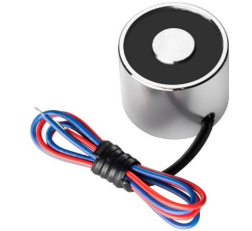 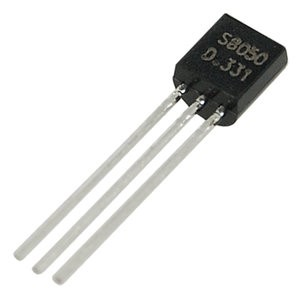 An electro magnet (suited for Arduino) can be turned on and off via a digital pin. The current through the Arduino itself is too weak for it to operate, so we need an external power supply (battery). Then, to regulate the voltage we’ll need a transistor.

Alternatively, we can also use relays. The Arduino would power the On/Off action of the relay and an external power supply can power the magnet.

We’ll need 6 electro magnets, 6 transistors (or relays if we go for that option), and one battery.

To reverse polarity of an electro magnet we can use the transistor, simply switch the output of the two transistor pins.

Serial communication between Windows and Arduino

We’ll be using Serial communication to connect our Windows software (PDF to binary output) to our Arduino software (binary output to solenoid). And in order to do that, we’ll be using the following library. https://sourceforge.net/projects/javaarduinolibrary/ As we do not have all the parts yet for the solenoid, we’ll be using LEDs for now. It’s the same principle.

We can for instance send an output of 111000, it will be communicated to the Arduino via the Serial port, and the Arduino will enable the first 3 of the 6 LEDs. 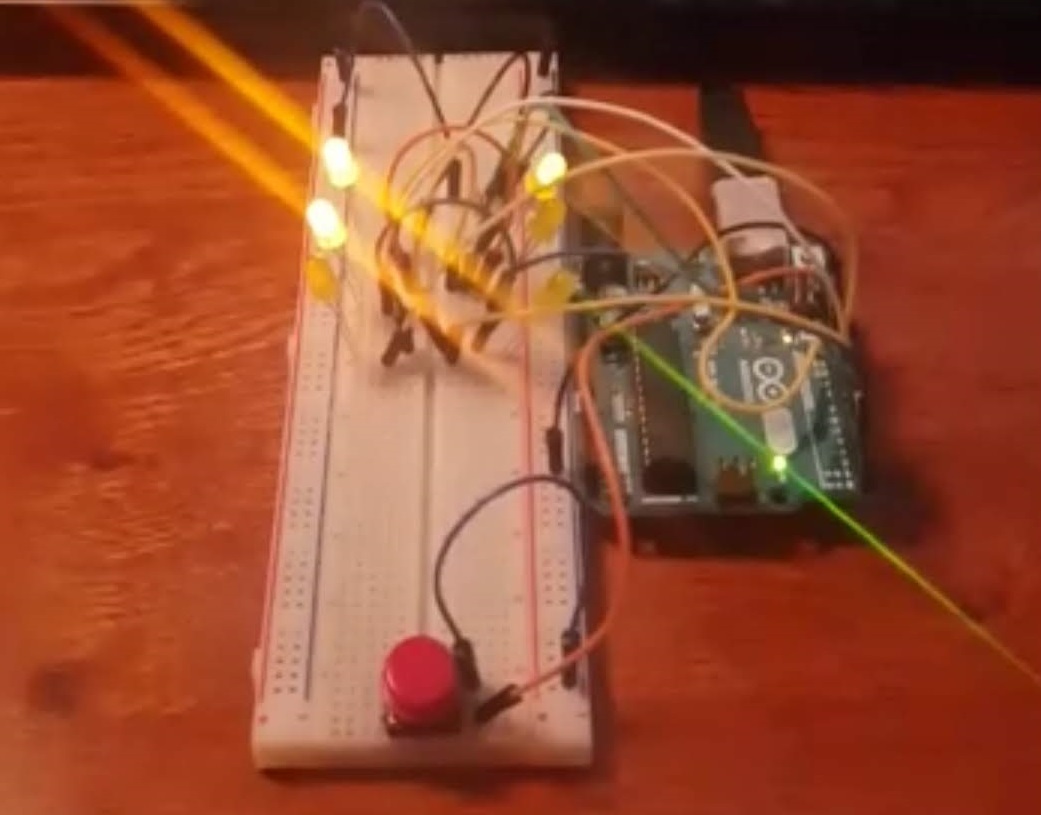 We have acquired a single solenoid for testing purposes. Our main goal was to find out if the solenoid we got was of good quality and if the strength of the solenoid was sufficient (can we push it down “accidentally” while reading?), before we invest in 6 of them. We did at first get a faulty solenoid, but the second one we got is perfect. After a lot of testing we could conclude that the solenoid is powerful enough and works reliably.

We have made a program to test both our solenoid and serial communication, while also gaining some more experience with GUIs (which will be used in our final product).

To connect to the Arduino from Windows, we have made a port selection GUI. Select the COM port, and click on connect.

We have added two simple functions: “Pin up” and “Pin down”. These buttons control the state of the solenoid. 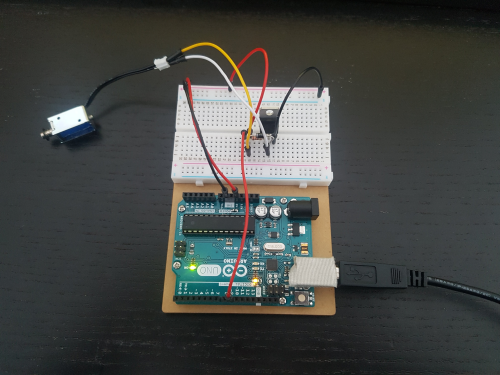 We’ll be buying 5 more solenoids next. (for complete braille input we require 6 pins)

We now have 6 solenoids in total, to display a single braille character. Every single solenoid is connected to a transistor to regulate the current and voltage, a diode to prevent current from flowing back, and a 220 Ohm resistor. We have a button to continue to the next character (from the loaded text file).

To power this all, we’re using a 9V battery connected to a 5V converter (because our solenoids can only handle 5V), connected directly to the solenoids. The reason we’re connecting the battery directly to the solenoids is because we ran into an issue earlier when connecting them to the 5V from the Arduino. The Arduino would crash, trying to supply too much current to power the 6 solenoids. 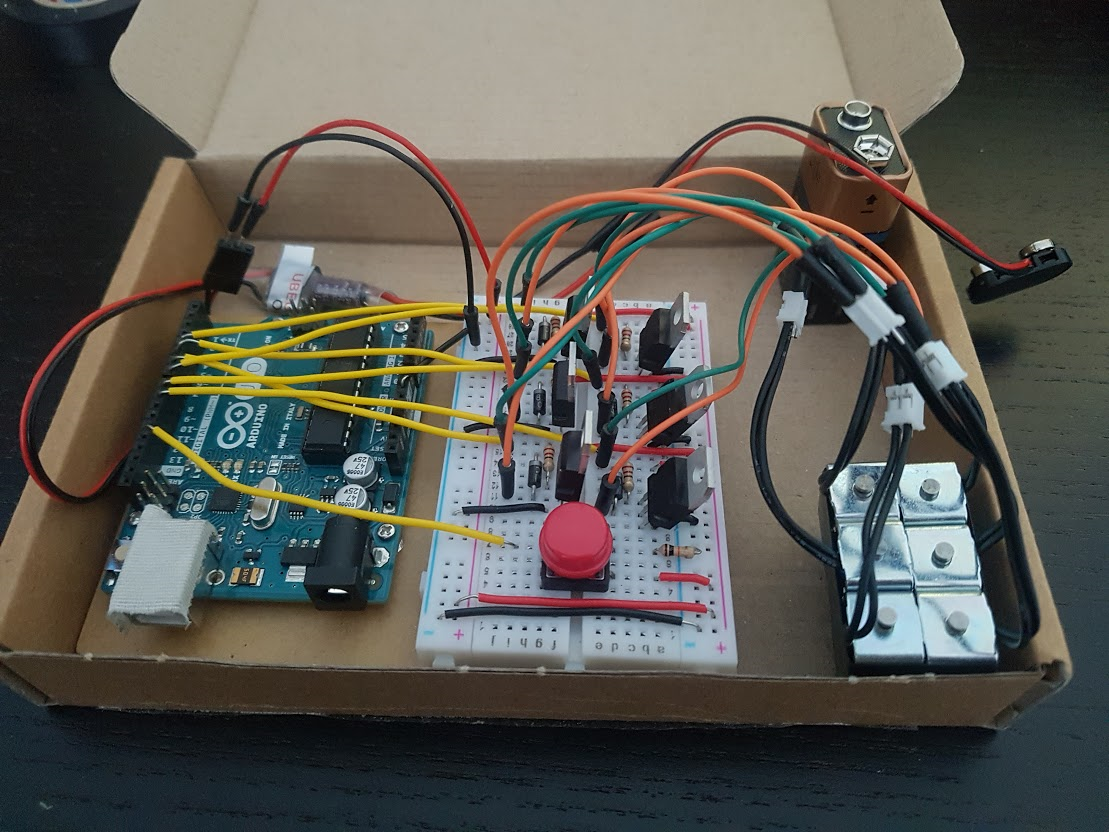 We have now finished the functional prototype. We encountered another power issue, namely that the solenoids would be getting a bit inconsistent after the 9V battery has drained a little. They weren’t getting enough current. We solved this issue by replacing the 9V battery with a 6X AA battery pack. After the circuit was perfectly working, we finished the software for the PC. We extended the software such that you first have to select the COM port (to connect to the Arduino), then you select the PDF file that you would like to read, and finally a window will pop up informing you about the state of the Arduino and the letters (and Braille output) sent. 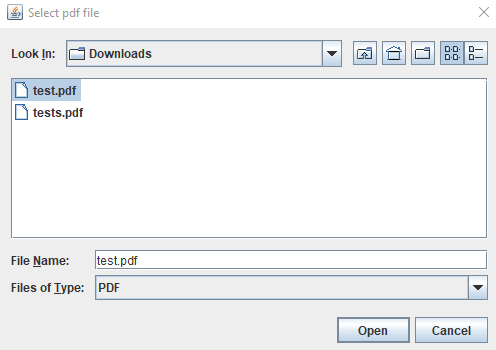 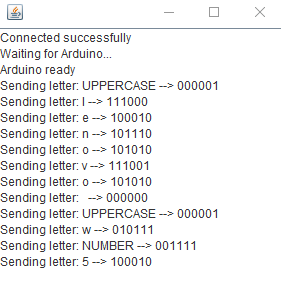 Model for the mechanism used in the final product

For the 3D modelling of the mechanism, several iterations will be made of different ideas. The model will keep changing because used methods or components will change. First a single dot of a braille letter was modelled, using some assumed dimensions for the parts. The technical drawing of this model can be seen below as a section of the complete pin. 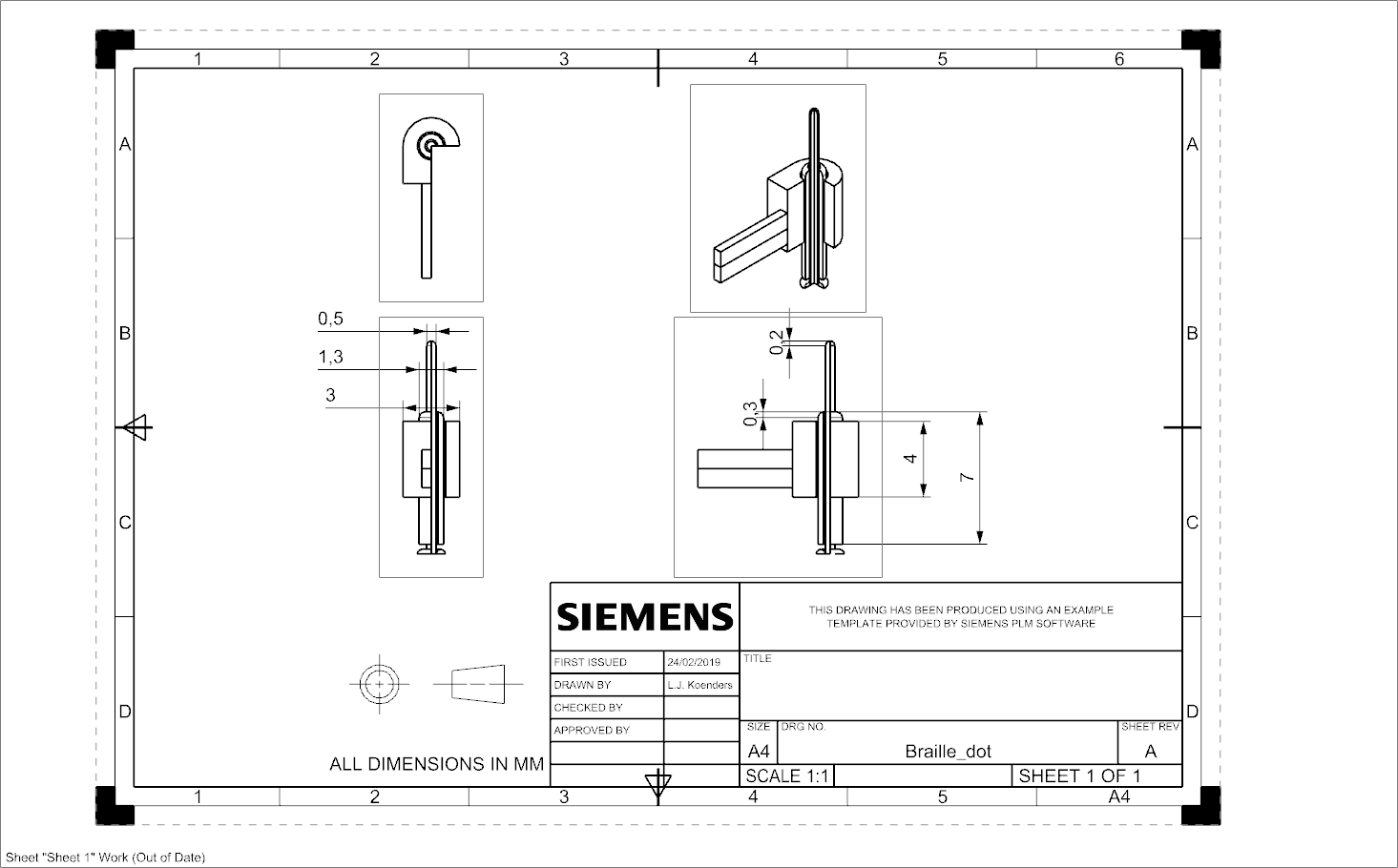 Then, six of these dots were used to model one complete braille letter, as is one of the goals for the end of the project. However, the model changed because we chose to use a different mechanism. The whole model was made from scratch, to include a solenoid mechanism with a cam and follower. This model can be seen below. 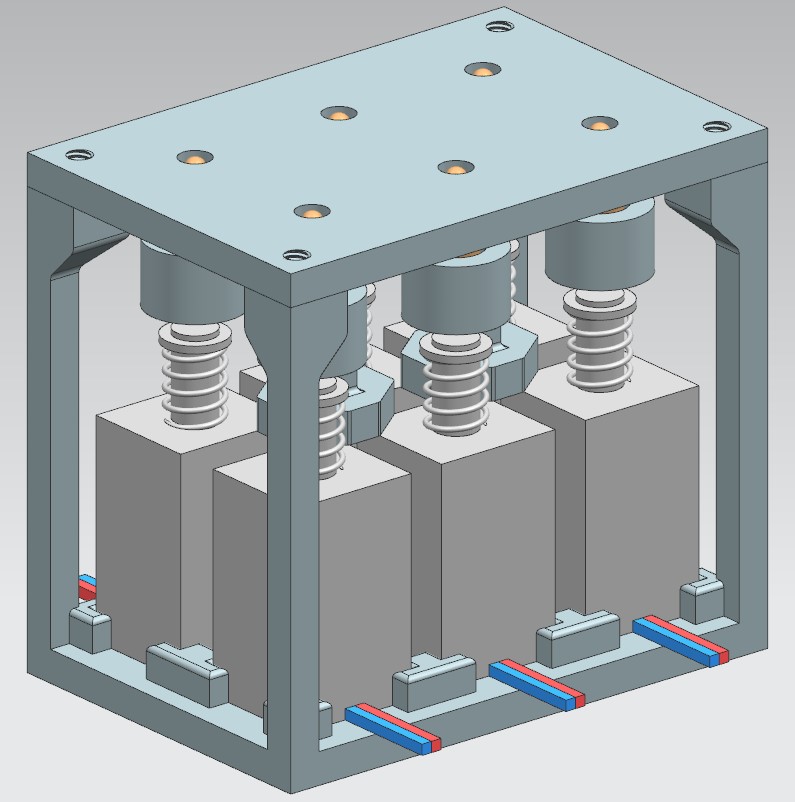 Also, a model was made of a pad of arbitrary length with several letters next to each other. This could be used for the dummy, but is also a help to visualize how much space we will have. The eventual length of the pad will be decided upon when the user-requirement list is set up.

The braille standards are different all around the world. The exact reasoning for these standards are nowhere to be found, however there was an article about how much you can feel with your body, which found out that the human finger is able to detect objects of a size of 2.3mm. Most values of the braille standards had a distance of between dots for around this value. While I did not find any further research to support my claim, I believe that the dot distance is based on this found value. Because I can not find what the exact reasonings for the differences between the values are, I suggest that we go for the electronic braille standards since we our robot falls within this category.

We can describe a 6-pin braille symbol by the position of the ‘active’ pins. In order from top to bottom and then left to right. We can represent this as a boolean vector or equivalent binary number. The symbol ‘a’ for example becomes 100000.

Currently we have written a program in java that accepts a pdf file and outputs a txt file with the text translated symbol by symbol to braille. The braille is encoded as described above.

TODO: Apply word context dependent rules including the number and letter prefixes. Add a way for the user to supply character translations so that things like language specific translation can be added when needed. Pass the translation to the arduino.

DONE: Segregation into words. Word specific number and letter symbols. Contractions for full words, prefixes and suffixes. A full list of these is not implemented and has to be provided, what kind of contractions people want to read also differs from person to person (grade 2 and grade 3 braille).

“When there are several ways to write a word, the shortest one is chosen, and when they are of equal length, the one without (two-cell) abbreviations is chosen. So, thence is written th-ence (3 cells) rather than the-n-c-e (4 cells). However, with the sequences -anced, -ancer, -enced, -encer, the form with -ance/-ence is used even if not shorter.” “In general, these are acceptable as parts of longer words as long as they retain their pronunciation”

Some of these could be practically impossible to implement, for example when pronunciation is mentioned.

We are choosing to ignore the more complicated situations since we do not even know if most people can read these kind of contractions.

Description of the algorithm