The dummy sentence is the first physical thing that will be designed. As stated earlier, the dummy sentence was chosen to be made to provide a full sentence in braille, without the product being extremely expensive. The initial plan was to make a prototype in which a full sentence could be displayed on demand. However, the final product will be a static sentence. The reasons for this will be explained in this section.

The final dummy could be used to further improve user research, for example by making the dummy out of different materials to test the preferences of the users. It could also be used to try out different positions of relevant buttons and switches.

The initial idea for a dummy sentence was to make a prototype with a predefined sentence, which could be displayed on demand. This way, the idea of a refreshable braille display, in which letters appear and disappear, remains. However, because no electronics are used, the cost of the prototype would be low.

With this in mind, the first version of the 3D model was made, which can be seen in the figure below.

As can be seen, the idea was to be able to screw this plate to a base below it, where the mechanism would be located to move a sentence up and down through the holes in the display. However, since the plan was to 3D print the model, it was realised that this was not realistic, since the 3D printer would have to print very fine screw thread. Therefore, the dummy was remodelled to be more “3D printer friendly”. 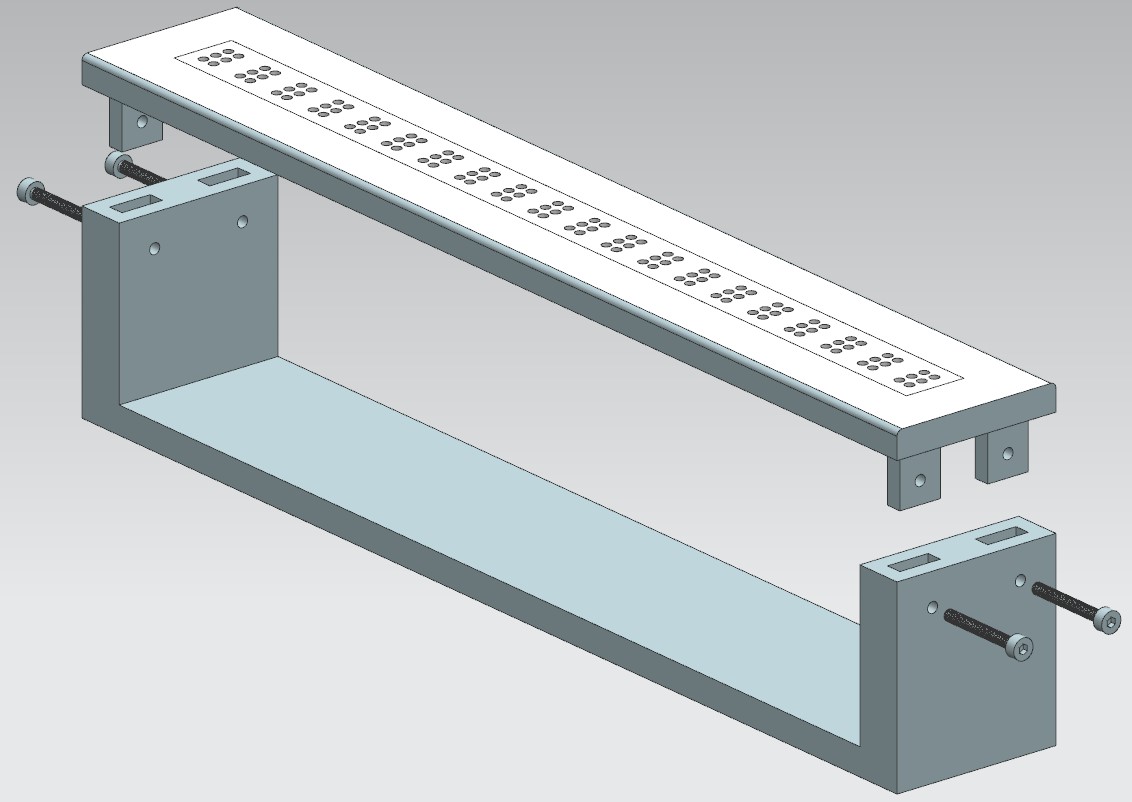 Now that the general idea was established and the main part of the prototype was modelled, the mechanism to raise and lower the sentence could be added to the design. For this, it had to be decided what sentence would be displayed. Eventually, the Dutch sentence “Ik lees braille.” was chosen, which translates to “I read braille.” in English. The braille equivalent is shown in the figure below.

Since the model had to be kept 3D printer friendly, adding this mechanism came with some difficulties in the modelling of the prototype. Eventually, after several new ideas and models, the design was finished, which can be seen in the figure below. 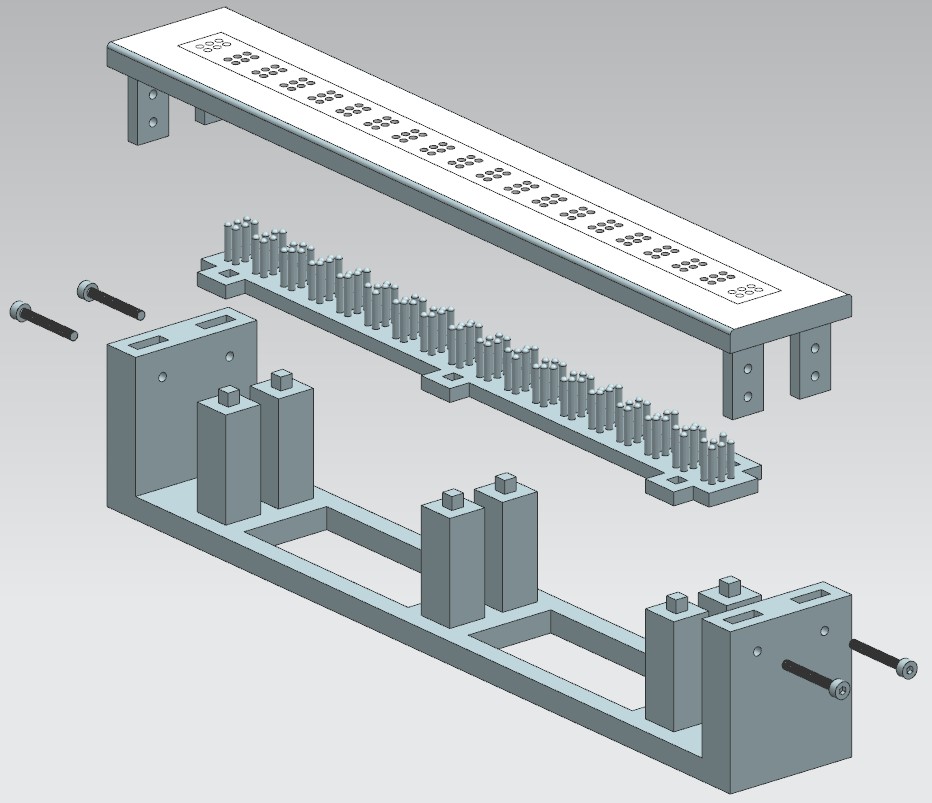 There are a lot of things to note in this model. Firstly, the braille sentence, made of pins of different heights. The dots that will be displayed will protrude through the top plate of the prototype. The dots that are not used, have a lower pin instead of no pin at all. This is done to stay as closely to the eventual product as possible, where the pins are always there, just either raised or lowered.

The pillars below that to hold up the sentence so that it reaches the top of the prototype. It was chosen to raise the sentence, instead of lowering the total height of the model, to make the assembly easier. The pillars have been added so the sentence can be mounted to the base, without that taking too much material to print. This means that this design is more 3D printer friendly.

The whole mechanism of being able to raise or lower the sentence is in the eight holes that can be seen at the bottom of the top plate. Because there are holes on different heights, the top plate can be mounted to the base at two different heights. This equals the sentence being moved up or down, without having a complicated mechanism to go along with it. The functioning of this solution is shown in the figure below, with the first render being in the highest position, while the second render is in the lowest position. 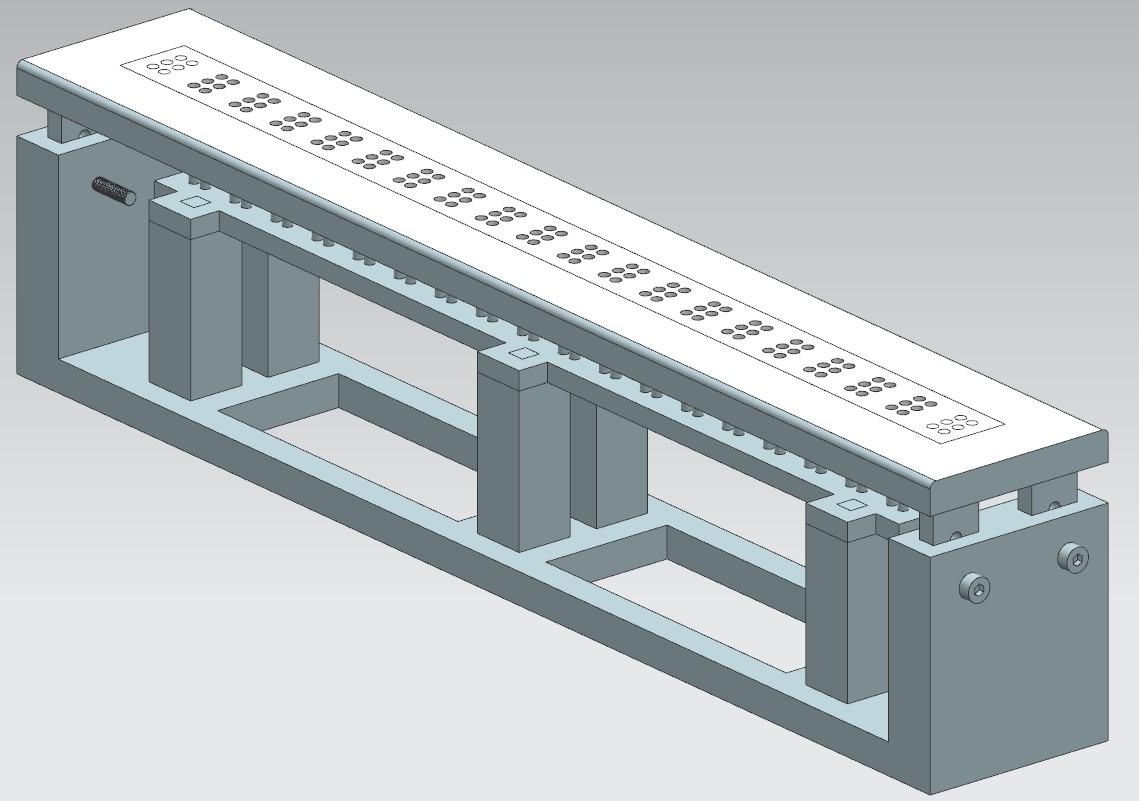 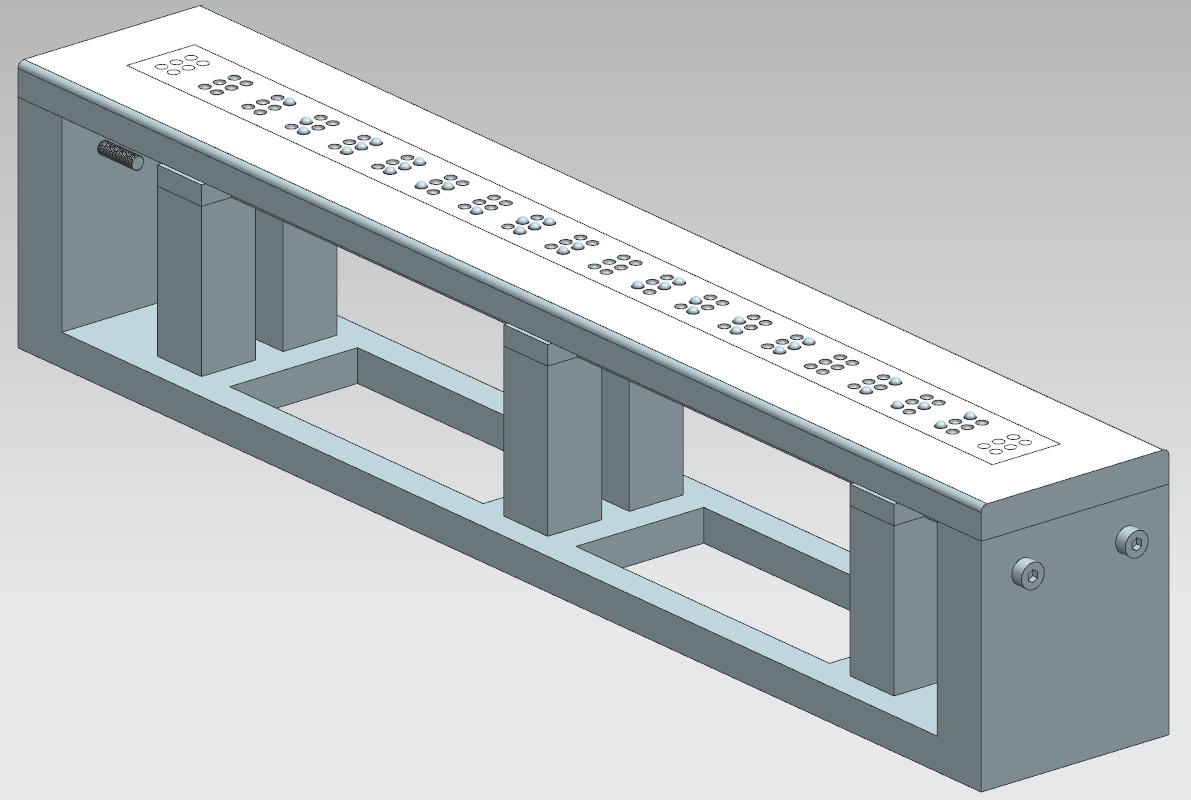 With the model completely finished, while also considering the limitations of 3D printing, the model was ready to be printed. Mister Van Gorp, the skills trainer of the Mechanical Engineering department, was paid a visit to evaluate the design and to print it at the department’s printers. Eventually, the conclusion was drawn that the holes and braille pins were too small to print, so the design would not function. This meant that the whole design had to be remodelled again. Together with mister Van Gorp, a backup plan was made and tested.

The backup plan that was executed was to implement the pins into the top plate, and therefore have a completely static prototype instead of having two different positions of the pins. To try if this did work, because the pins would still have a tiny diameter, a test sample was printed to see if this plan would work. 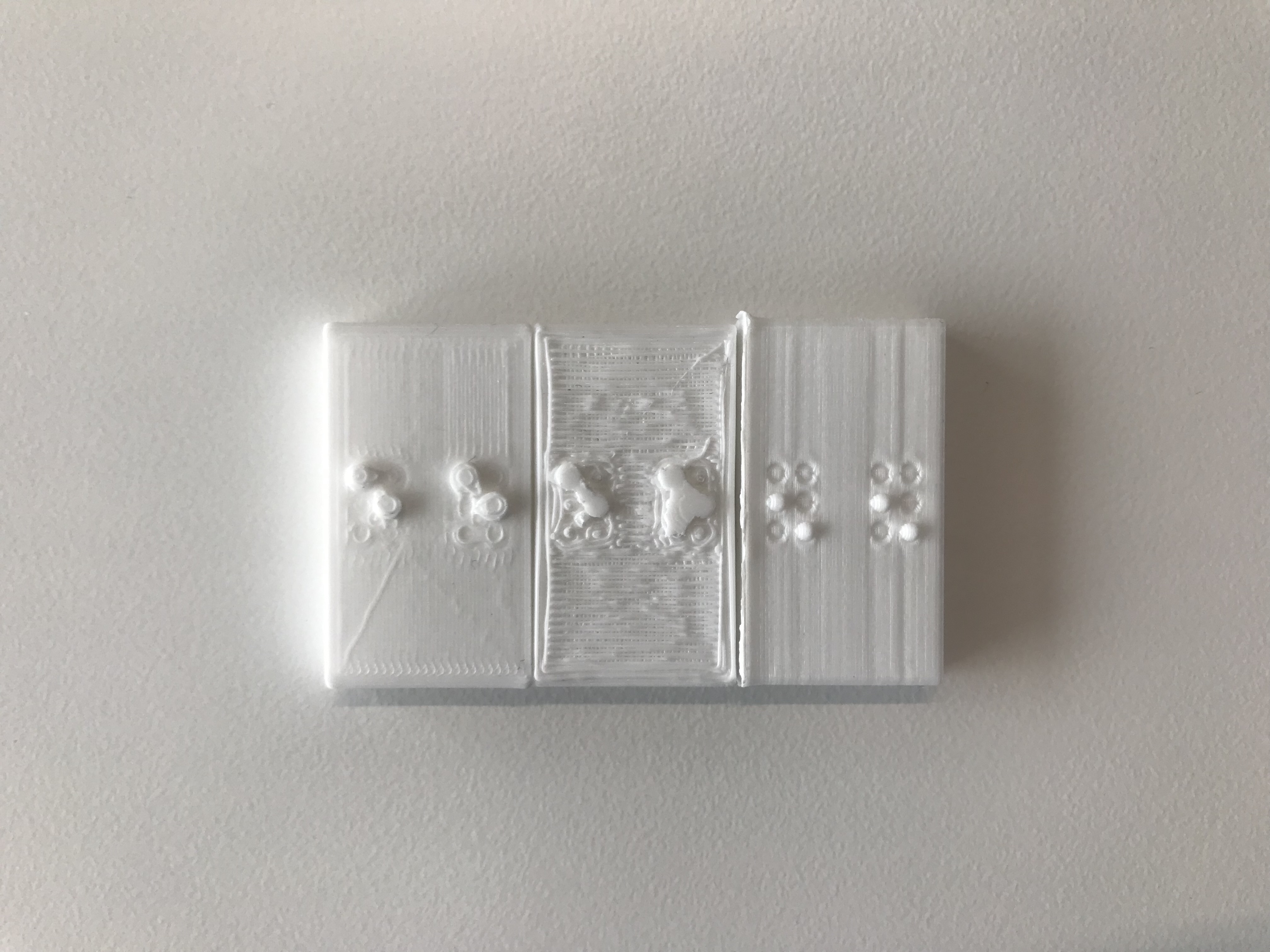 It is easy to see that printing it on the side gives the best result. Therefore, the whole model was printed on its side which resulted in the final prototype as can be seen in the figure below. 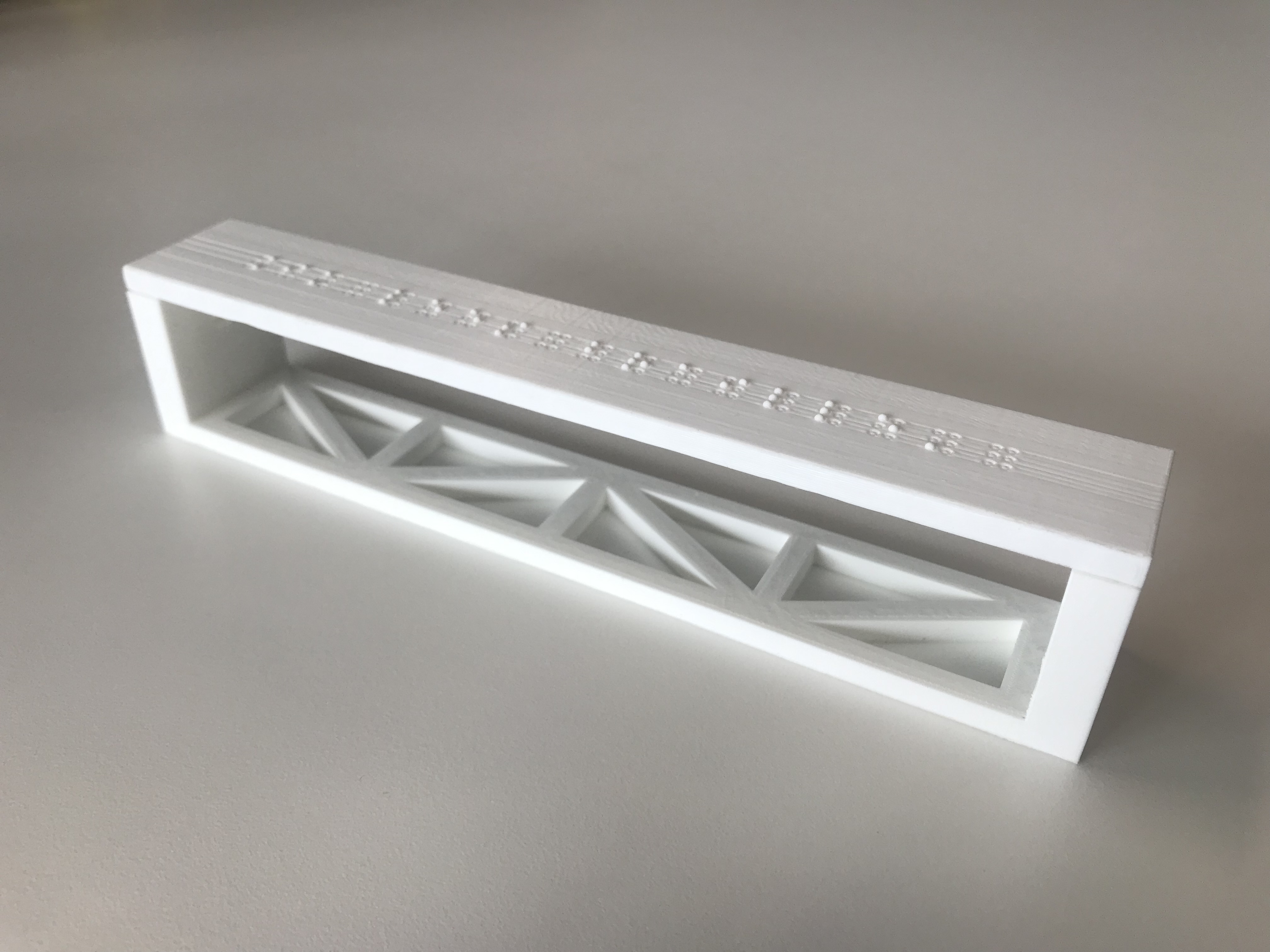